Brooke Fraser’s third release, Flags, is a wonder. From the stunning lyrical imagery throughout to the impressive guest vocalists who join her (the Cary Brothers, Jon Foreman and Aqualung among them), from Fraser’s ethereal and breathy performances to the wide-ranging soundscapes, this record is drenched in beauty and stands as one of the more remarkable achievements of 2010.

Fraser waltzes confidently through upbeat love songs like first single “Something in the Water” but manages to do so without sounding saccharin sweet or clichéd. “Betty” has some pep as well, mixing finger snaps and a horn section with this pop rock melody about a girl who is hiding her real self from the world beneath a front of confidence and control. The final refrain of “Jack, Jack Kerouac” is sung in a fun, catchy manner on “Jack Kerouac,” but while the album has its share of pop numbers like these, Flags as a whole is not light, fluffy or disposable content by any means.

Lyrically, Fraser paints evocative pictures and evokes powerful emotions with all the ease of a seasoned veteran who writes without having to think about what is coming out. “Coachella” sounds and feels like the most epic sunrise you’ve ever seen, so full of hope for the day to come and the promise of what life still holds. Apart from the obvious visual in the title “Ice on Her Lashes,” the song is mournful and heartbreaking with its trio of characters learning to live another day, another year, and in fact a life without the ones they love the most.

For the most part, the thing that makes this album so noteworthy is that unlike a lot of albums which tend to trail off as they go on, this one gets stronger instead. After the gorgeous, quiet love ballad “Sailboats,” with its story about love’s power to heal you and set you to moving forward in awesome ways, the album ends with a trio of songs that create the record’s finest moments. Fraser’s vocals are at their most dynamic on the epic “Crows + Locusts,” her lyrical insight reaches its peak on “Here’s to You” with lines like, “Life is short as the day is long/I can’t leave you my body/But I’ll leave you a tune/This is my legacy/Cheers to you,” and on the closing title track you cannot help but be moved by her unswerving belief that the last will be eventually be first, even if the sentiment is not one you can bring yourself to believe personally.

On Flags, Fraser demonstrates that she is not just another in a long line of pop singer-songwriters who get by on their looks and marginal talent. Her observations alone about the human condition cause this collection of songs to rise above the efforts of many of her contemporaries, and her rich vocals combine with the plethora of piano pop rock sounds and sometimes otherworldly accompaniments to make the whole experience even more impressive. 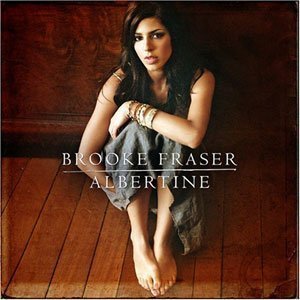