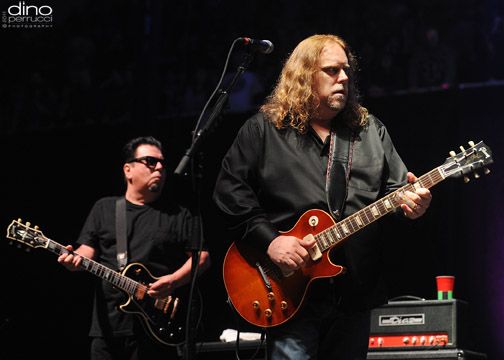 Though Warren Haynes’ annual Christmas Jam has become synonymous with legendary performances and monumental collaborations, it should have surprised no one that the 23rd edition would exceed even those lofty expectations.

Highlights from the 2002 Warren Haynes Christmas Jam will be released on 12/6.

Warren Haynes has announced the headliners for the 23rd annual Christmas Jam.

For the 22nd year in a row, the Warren Haynes Christmas Jam returned to the guitarist’s hometown of Asheville, NC last night with this year’s event taking place at the Asheville Civic Center. Yesterday’s event saw the debut of the Warren Haynes Band and sets from Missing Cats featuring JoJo Hermann and Sherman Ewing, prog-jammers Umphrey’s McGee, classic rockers the Steve Miller Band, Widespread Panic frontman John Bell, the Gregg Allman Band and a late-night thrown down from the Dirty Dozen Brass Band.

[All photos by Rob Chapman]

Haynes offered tracks from his upcoming soul album backed by Ron Johnson on bass, Ivan Neville on keys and vocals, Ron Holloway on sax, Terrance Higgins on drums and Ruthie Foster on vocals. Bassist George Porter Jr., keyboardist Ian McLagan and drummer Raymond Weber were featured on the album according to the Relix article announcing the band but did not perform with Warren last night. Warren’s set included a cover of Sneakin’ Sally, which you can check out right here…

There were plenty of guest spots throughout the evening including John Bell adding vocals to Umphrey’s version of Ain’t No Sunshine, Andy Farag and the Dirty Dozen Brass Band Horns sitting in at points with the Warren Haynes Band, Haynes returning the favor by joining the Dirty Dozen Brass Band and the Steve Miller Band. Also, South American harpist Carlos Reyes sat in with the Steve Miller Band, Ron Holloway and the DDBB Horns added brass to Gregg Allman’s Just Another Rider, while John Bell joined the horn section for Allman’s take on Guilded Splinters before Steve Miller sat in on Lost Highway.

READ ON for the complete Christmas Jam setlist, a slew of videos from nearly all of the acts and more photos from last night’s show…

[Thanks to tgakidis for this week’s photo]

The Orange Peel was the site of the pre-jam, the concert that takes place before the Annual Warren Haynes Christmas Jam down in Asheville, North Carolina. For these tracks, Ani is first joined by just Warren and for the second track both Warren and Jeff Austin from Yonder Mountain String Band. Ani says that she has just recorded the second tune with the Preservation Hall Jazz Band for a benefit CD, more info on that here. The crowd is a little bit chatty, but a nice collaboration nonetheless. Ani next plays January 20th at the Harro East Ballroom in Rochester, NY.

READ ON after the jump for more tracks from the last weekend’s Warren Haynes Christmas Jam, Furthur and Old School Percy Hill…

Unlike the slow pace of last week, we weren’t at a loss for stories this week. In fact, we didn’t even get to the Warren Haynes Christmas Jam lineup announcement 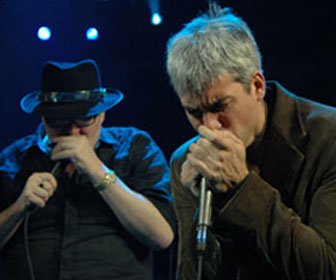 Warren Haynes' Christmas Jam has been around for 18 years, but was a strictly provincial affair up until the late 90’s. WarrenBase, the side project section of the indispensable MuleBase, reveals that it was still a loose gathering of acoustic and electric sets, local bands, and the appearance of only one or two major acts before it began to mushroom. Later it moved to the Thomas Wolfe Auditorium, and finally the main arena in the Asheville Civic Center, where it'll presumably stay.