Bob Weir, Chris Robinson and Jackie Greene are in the midst of their first tour together. We check in on them for this riveting take on Bertha by the Grateful Dead.

Furthur will hit ball parks and sheds this summer. 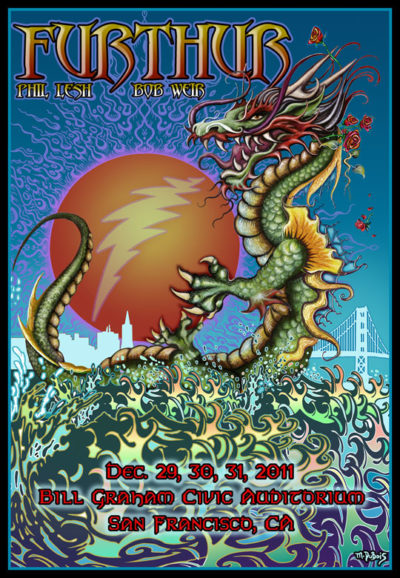 If you happen to be one of the lucky ones to have caught Furthur’s soon to be infamous NYE run there’s no doubt you’re still glowing. Over the course of three exceptionally played shows, Furthur fully took on the identity of a building oceanic ground swell. It was a true masterpiece in all aspects that not only sent a message to the greater jamband community, but respected and honored the storied tradition built by the one and only Grateful Dead.

Robinson Gets His Red Rocks Off w/ Furthur

Of the hundreds of outdoor venues Phil Lesh has played over the past 50 years, the Grateful Dead/Furthur bassist ranks Red Rocks in the top two along with The Pyramids of Giza in Egypt. In fact, there’s a plaque at the Morrison, Colorado venue that says as much, so you knew last night’s Furthur show at Red Rocks had the makings of something special.

For the start of the second set, Phil and Bobby’s band welcomed Chris Robinson of the Black Crowes and Chris Robinson Brotherhood to lead them through classic Pigpen-sung tunes The Stranger (Two Souls in Communion) and Hard To Handle as well as the Furthur debut of Bob Dylan’s You Ain’t Goin’ Nowhere. Robinson has a long history with Weir and Lesh dating back to the Crowes opening for the Dead in Tampa on April 7, 1995. More recently, Chris did a few tours with Phil and Friends and performed back in August with Weir and Jackie Greene at the Folks Festival in Lyons, Colorado. Back on March 12, 2010, Robinson first sat in with Furthur at Phil Lesh’s 70th Birthday Bash, where he sung a number of songs including The Stranger.

With the Grateful Dead’s massive, drool-inducing Europe ’72 box set set to finally roll out this fall, the band’s 22-date tour will once again be mined for a scaled-down companion

Picture Show: Gathering of the Vibes 2011

Gathering of the Vibes at Seaside Park, Bridgeport, CT – July 21-24

Outside of a few questions that aren’t suitable for print, “So how many have you been to?” is probably the most asked question around Gathering of the Vibes. Sixteen years after its humble beginnings as Deadhead Heaven – A Gathering of the Tribe on the campus of SUNY Purchase, Vibes has become one of the Northeast’s largest annual festivals and one of the oldest as well. In a year when many “newer” festivals celebrate their tenth anniversary, GOTV is well into is second decade. Each summer, friends – many of whom only see each other for four days each July – meet up at Seaside Park in Bridgeport, CT to spend a weekend together. With the heat at record highs over the weekend (103°F on Friday) more than ever it was the people, both Vibes veterans and newcomers, who made this year’s event memorable.

Sticking to its roots as a celebration of the Grateful Dead, five different members of the band played at some point during the weekend. Dark Star Orchestra brought Donna Jean Godchaux to the stage on Thursday, Bob Weir and Phil Lesh’s Furthur headlined on Friday, while Mickey Hart and Bill Kreutzmann’s Rhythm Devils held court on Sunday. While many other festivals have recently been adding more electronic and popular acts – sometimes to the dismay of their core audience – Gathering of the Vibes has always stayed true to its roots. If the crowd on the field for Furthur was any indication, it seems that GOTV knows their audience as trying to snake your way out of the concert field was all but impossible with a patchwork of singing, swaying fans.

READ ON for more on Gathering of the Vibes 2011…

We keep our eyes peeled for new tour dates announcements each week and compile them on Tuesdays for this handy column… On September 13, quirky funk-rock act Primus will release

In 1964 Ken Kesey and his cohorts collectively known as the Merry Pranksters headed out on an acid-fueled, cross-country journey to the World’s Fair in New York aboard an old