The Hopscotch Music Festival is only in its second year, but the event already feels like a tradition.  That’s partly due to the undeniable uniqueness of the festival, and partly to the huge cache of local bands that take part, thus drawing out local music fans by the busload.  During Hopscotch, the lucky locals are happy to show the weekenders just how brightly Raleigh’s music scene, and the city itself, can shine.  With so many amazing venues taking part, and the ever-increasing variety of other diversions downtown, the weekend becomes one big make-out session with the capital city. 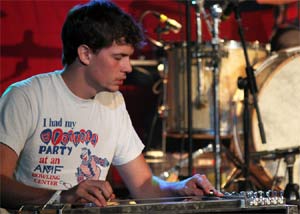 The inaugural Hopscotch Music Festival went off far better than most could have anticipated. Enthusiastic, well-mannered crowds managed to fill the downtown Raleigh, NC streets for three days with barely any issues, save a few very packed shows that left many fans milling about in the cool night air. There was an awful lot of music to experience and a lot of concrete to tread, but a few moments stand out. Here are seven good and three bad things I managed to experience over the weekend.