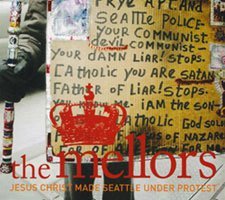 The Mellors: Jesus Christ Made Seattle Under Protest

Emerging from the rubble of two of Seattle, Washington's most celebrated bands, Tuffy and Floyds Ranch, The Mellors surfaced in late 2004. Led by singer/songwriter/guitarist Jamie Lane, the band’s self-titled debut was uncharacteristic from the majority of groups in the Emerald City as it embraced a Mid-Western sound that is organic with just a touch of Southern twanginess.