Legendary character actor Powers Boothe has passed away; he was 68. The announcement was made on Twitter by friend and fellow actor Beau Bridges, and the news sent a shockwave through Hollywood. Boothe built his career bringing nuance into whatever role he stepped into, big or small. He’s left behind a legacy of amazing characters, like Alexander Haig in Nixon and Curly Bill Brocius in Tombstone. Most memorably, he played Cy Tolliver, rival to Ian McShane’s Al Swearengen, in HBO’s cult western, Deadwood. His final role was a run as Hydra head Gideon Malick in ABC’s Agents of S.H.I.E.L.D. Boothe leaves behind a wife and two children.

‘GLOW’ Takes a Trip Back to 80s Wrestling

Netflix released the first trailer for the upcoming female wrestling dramedy GLOW, showcasing a behind the scenes look at the world of 80s wrestling. Focused on an underground, females only wrestling program that started in Los Angeles, GLOW (the Gorgeous Ladies of Wrestling) stars Allison Brie (Community) as a down-on-her-luck actress and Marc Maron (Maron) as the wrestling promoter looking to cash in on the shtick. The trailer manages to capture the look at feel of the 1980s, from the style to the drugs, and is being produced in part with the help of Jenji Kohan, Tara Herrmann, and Carly Mensch, the team behind Orange is the New Black. All of this might just be a recipe for further Netflix success, though we won’t know for sure until the series premieres on June 23.

Fox released the first trailer for the latest TV series set within the X-Men universe. The Gifted plays things rather close to the chest with their first look, as yet keeping its secrets well-hidden, but the possibility of appearances from well-known X-Men is certainly tantalizing and, beyond that, it looks to be an exciting addition to the canon. The series is produced by Bryan Singer, who’s directed 4 of the 6 X-Men movies (not including the Wolverine trilogy or Deadpool), which means there could be plenty of direct connections to the cinematic series they haven’t revealed yet. Even without those connections, however, the series looks enticing enough to stand on its own, and offers plenty of mutant action. The Gifted premieres later this year on Fox.

The long awaited second movie from Deathgasm director Jason Lei Howden is enter production soon, with some massive star power to bolster it. Daniel Radcliffe has signed on to star in Guns Akimbo, which follows a regular bloke forced to take part in gladiatorial combat on a darkweb site to help win the freedom of his kidnapped girlfriend. Howden proved himself to be a master of genre conventions with Deathgasm, which we named one of the best films at SXSW 2015.

‘Guardians of the Galaxy’ Soars for Second Weekend in a Row

Guardians of the Galaxy vol. 2 took the top spot once again at the weekend box office, pulling $63 million in its second weekend of release and towering over the competition. The Amy Schumer led Snatched, which featured the return of Goldie Hawn, came in second place with $17.5 million, while King Arthur flopped into third place with just $14.7 million (on a $175 million budget). Fate of the Furious dropped to fourth place with $5.3 million, while Alec Baldwin’s Boss Baby rounded out the top five with $4.6 million. For the full top ten, see below. 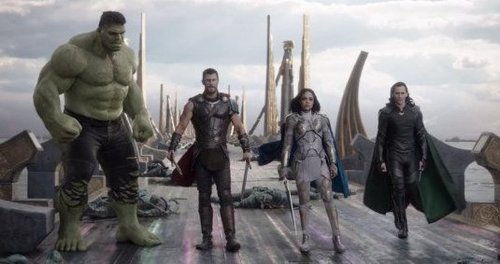 Comic Con 2017: All the Best Trailers

Film Bits: ‘Guardians of the Galaxy vol 2’ Releases Trailer; ‘The Mummy’ May Be Peak Tom Cruise