There’s nothing left for us to do now except to examine the disaster. Not the one that befell King’s Landing, but the one that has befallen Game of Thrones.

Sticking this landing was always going to be a tricky maneuver to manage and no matter how it ended a good portion of the fan base was going to be upset and turned off. A show that has become so inexplicably important culturally has an unbearable weight it is expected to carry and, to be sure, that’s incredibly unfair. But rarely have we had an example of a series where we could almost pinpoint the exact moment that the writers stopped caring.

It’s heartbreaking to admit, but this ball has been almost irrevocably dropped and the worst of the criticisms that have been bubbling ever louder over the past two seasons have been proven correct. In the mad rush to the end, Game of Thrones cut so many corners and used so much shorthand that audiences have been robbed of what might have been one of the most emotional arcs ever constructed. Instead we were given a hodge podge of hand waving and vague exposition used in the place of development. The result is a cheapened experience that fails to remember what we so loved about this series initially.

True, Dany’s heel turn has been telegraphed from the very beginning. Historically speaking, dragon riders have rarely been harbingers of goodness and glory. And she hasn’t even exactly been shy about using her “children” to enact her will in the most violent of means. Frankly, if you didn’t see this coming you haven’t been paying attention. Breaker of Chains she may be, but she’s still an outside invader who chooses violence at every turn while preaching about mercy and good will and love. She is and always has been a tyrant.

But her turn here was so abrupt and so narratively undeserved I couldn’t help but laugh. Never mind that the effects looked like something out of Syfy’s latest summer camp fest (although, oof, the CG looked terrible). What was missing, and what has been missing, is the emotion. Dany’s fall from the grace of the moral high ground happened so quickly that the payoff simply wasn’t there.

In retrospect, the decision to cap the final two seasons of the biggest show of all time at an arbitrary 13 episodes will go down as the most monumental misstep in television history. The mad dash to the finish line has ended up feeling like a watching a student trying to finish a paper that’s due in an hour. At this point, Game of Thrones is just trying to hit its word count and hoping for the best.

The series we fell in love with would have forced us to wallow in Dany’s growing misery and isolation, drawing out her descent from the beloved Khaleesi to the Mad Queen. To imagine what might have been if series creators D.B. Weiss and David Benioff had stuck to the formula of ten episodes a season is to become enraged at the thoughtless squandering of audience good will and love. What should have been a heartbreaking moment was reduced to 45 minute scene devoid of nuance or meaning.

It was devastation for devastation’s sake, neglecting to realize why we got on board with this story in the first place. It was a climax without a build up. And while the series has made a big deal of saying “not everything has to happen on screen, you know” over the past couple of seasons, that we’re supposed to contend with Dany’s fall without getting to watch her slowly sink into her family’s curse was the most devastating moment of the series—and not for the reasons they hoped.

Arcs that stretched for seasons were thrown out for shock value alone. Jaime’s redemption? LMAO. Cersei’s strategic brilliance? LMAO. The Valonqar? LMFAAAOOOOOO. But at least we got the Clegane Bowl, I guess? That was neat. Watching two ultimately minor characters fight to the death because certain segments of internet fans had been hyping it for years was…certainly something. And we got to see The Mountain’s face finally! Surprise! The reanimated corpse looked just like a reanimated corpse! Who among us saw that twist coming?

That, too, might have played better with some more emotional build up but, once again, it felt like an awful mix of fan service and a payoff that wasn’t narratively earned. (Although, yes, it was nice that the hound died by his greatest fear.) If only they’d paid that much attention to Cersei who was reduced this season to staring out of windows and whining about elephants. By the time the walls fell down on her, burying her and Jaime together in a romantic (?!) end, it was hard to really care. Like so much of what happened in this episode and in the last two seasons, it felt hurried and unearned.

Had any of this happened with the appropriate emotional build up, we’d no doubt be having a different conversation. But it didn’t. As a result we’re left with a series which squandered its potential in its penultimate episode. Yes, the Shakespearean scope of Game of Thrones always suggested that things were going to end tragically. Unfortunately the series has been forever marred by the inelegance with which they made that leap. What we’re left with is the half-filled outline what of what might have been and the hope that the hole they dug themselves into is at least somewhat filled in when next week’s finale fades to black. 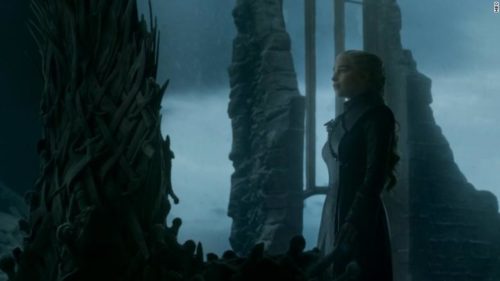 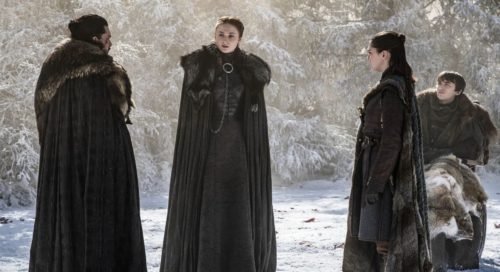 ‘Game of Thrones’ Ramps Up Towards the Final Showdown (TV REVIEW)