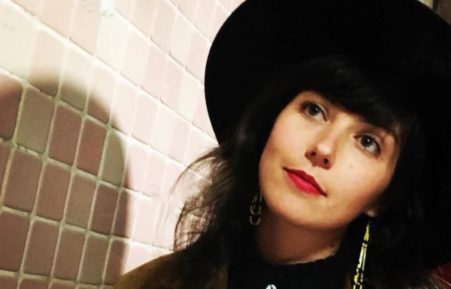 Two years after the release of her acclaimed debut album, Bandita, Seattle singer-songwriter Lydia Ramsey has just released her second full-length LP, Flames for the Heart. The album represents an exciting evolution in Ramsey’s sound. With a driving rock feel, gorgeous string arrangements, and new songs written for piano and banjo, the album reflects a fresh compositional perspective and a broadening of the traditional folk elements found in Ramsey’s debut album. Besides her charming and powerful vocals, the album also finds Ramsey demonstrating her skill as an arranger as she makes rich use of a wide range of instruments to give the music a sprawling and textured sound. The result is an album that mixes twangy country and Americana, rootsy folk, and a big rock sound. Through it all there is a sense of urgency, a fierce and hopeful lyrical sentiment reminding us of the light and darkness in all of us and, with a fiery joy and sorrow, urging us to appreciate all that we have in our lives each day. A full listen finds Ramsey to be an artist worth savoring, as her lyrics seem to reveal new meaning and depth with each repeated listen. Ultimately Flames for the Heart is the kind of understated yet emotionally and musically hard-hitting album that is harder to find these days. With the album out now, Ramsey took the time to share her personal commentary on the inspiration and experiences behind each song on the album.

When I first starting writing this song I was imagining walking down a road with the hardships of life on either side, but nothing able to touch me or block the direction I was going. Whatever form darkness appears in your life, there’s a flame to light it and when hardships do fall on your doorstep, you’ve got to be ready to deal with them and keep going forward.

I love staying up late dreaming about what the future could look like. But at some point I realized I was just talking about my dreams and not doing anything to pursue them when morning inevitably came. One night in particular I stayed out after a show without calling home and was struck with this overwhelming guilt when I released the sun was starting to rise. This song unfolded out of some self reflection I needed to have and as a reminder to ask for help from the one’s who might have answers to give when we’re trying to sort our lives out.

This is a song about defining what’s really important to you in life and getting out of your own way to hold onto it. I love the arrangement we landed on with this song, making it a more driving track on the record. I originally wrote it with a slower, back beat feel, but this version was just more fun. I remember when I wrote the chorus I had it stuck in my head for days and days and would sing it to people when I was out.

I wrote this when my partner was on a trip to Italy, pondering how it feels to pass through the seasons with or without someone by your side, to change and grow and continually search for the good things that make this life worth getting old. The turning of a season always brings with it a lovely melancholy I find somehow comforting. I suppose it’s the consistency of change in all things and the reminder not to fight it.

This is a song I’ve played around with for years. I can remember this feeling of being single when the wrong person steps in your path, like a crazed wave comes over you, and you’re drawn to it even though you know it’s not right for you. It really can make you feel crazy, like you’re melting into something and can’t do anything to stop it.

This is a sweet piano tune influenced by my introduction to choral music at an early age. We played and sang a lot of hymns as a family, and some of the old folk hymns have the best phrasing and really interesting ways of passing between chords. The words came about from missing someone; someone who moved away, someone who passed. Sometimes friends who’ve passed visit me in dreams. I’m always grateful to see them again and try to learn how to soften my anxiety about loss, and be bendable in times I feel as though I might break.

I think hope is one of the important emotional capacities humans have. There are countless tragedies happening all over the world, it’s very difficult not to get wrapped up in them and feel frustrated by others’ violent, entitled and ignorant behavior. In 2018 when Emma Gonzalez and her classmates took a stand to fight gun violence, it was a reminder to me that there are people all over the world standing up to violence and injustice everyday, and it gave me some much needed hope that things will get better.

8. “Voices in the Distance”

I grew up in a small, wooded beach town and have spent much of my life walking dark trails and floating on the water in my families little, white rowboat. I wrote this thinking about what it feels like to walk through a pitch black night, and how the push and pull of the oars feel when you row against the tide trying to get home, when at the same time you want to stay in that black night or far out on the water and never come back.

I wrote them this little love song for my sister-in-law and her husband when they got married last year. The wedding was in Asheville, North Carolina on a crisp, autumn evening. I wrote the verses to speak to their strengths, to share some about where they both grew up and to remind us all, the depths of love are endless.

Whenever something bad happens, we always wish it would be the last time that thing would ever happen. This song was written about gun violence, asking our leaders, what will it take to make changes so our country is safer. Life is so precious and fleeting, I try and remember to make the most out of the short time I have on this earth.

A few years ago, two of my friends sold everything they had to travel the world. The idea of them leaving everything behind but holding on to each other was so amazing to me. I still get chills sometimes when I sing this song and I love ending the album with this idea that all we need is each other to walk out into the unknown.