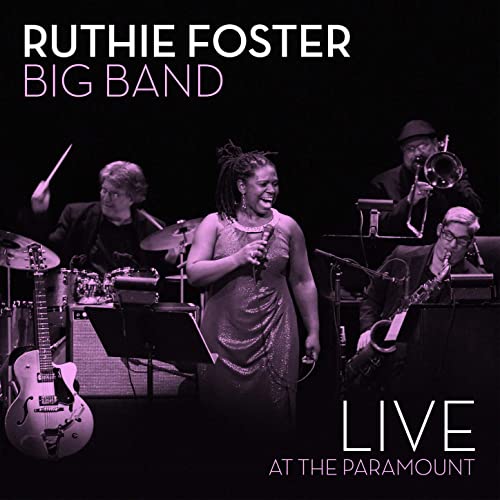 If you’re thinking that Ruthie Foster traded in her award-winning blues style to become a jazz singer, you are only partially right. Surely a vocalist of Foster’s caliber is versatile, and she’s already proven to be a great folk, gospel, and blues singer, also capable of covering rock standards. So, putting her in setting to deliver the kinds of tunes associated with Ella and Frank is not that much of a stretch. Just be wary that those examples comprise just two of the thirteen tracks on Live at the Paramount, her ninth album. Most of the fare are notable originals and covers, mostly those we have heard on previous albums, here with a 14-piece band including three vocalists and a conductor. So, on “Fly Me to the Moon” and “Mack the Knife” Foster turns jazz vocalist but this is more a “Ruthie Foster live” performance than it is big band jazz show.

The non-jazz arrangements are courtesy of Miles Davis alum John Beasley with John Mills as conductor throughout and arranger of the two jazz tunes. She does save the best for last, so to speak, delivering the two jazz tunes as an encore. She takes “Fly Me to the Moon” into Sinatra territory but has even more fun with the iconic murder ballad, “Mack the Knife,” where she goes beyond great, invoking Ella and Louis Armstrong simultaneously, scatting and ad-libbing,  even name dropping the man who had a number one hit with the song, Bobby Darin. Of course, the audience response is overwhelming, the last of many loud ovations of the evening.

This is a truly special evening as Foster performs in Austin’s 105-year-old venue, introduced by her daughter to begin the evening. She begins with the gospel-infused “Brand New Day,” designed to engage the audience with clapping and shouting, which ensues almost immediately like a festive church meeting. She moves next to soul, “Might Not be Right,” written with William Bell. Then she moves to Johnny Cash’s “Ring of Fire” which appeared on Let It Burn, delivered in even more smoldering fashion here (“This is not your grandfather’s ‘Ring of Fire’”). The band swings hard on one from her early career, “Stone Love,” with her chill-inducing wail at the end. She then simmers the growing enthusiasm by tenderly delivering “The Ghetto,” originally rendered on her Promise of a Brand New Day.

She returns to gospel fervor with the roof-raising “Death Came a Knockin” (Travelin’ Shoes) with the background vocalists serving as an inspired choir, again capping it with her trademark wail. That kicks off a series of tunes heard on recent albums beginning with “Singin’ the Blues” to “Runaway Soul,” “Woke Up this Morning,” “Joy Comes Back” and set closer (before the two jazz tunes), the rousing “Phenomenal Woman.” Although Ruthie claims “you can’t out-sing a 18-20-piece band,” she arguably does. The energy is so palpable, and there’s an inspirational vibe to the whole show. Foster says, “I loved Sinatra, the way he would a handle a band like that. It’s just a real art form. We need to put it out there in front of people, so they realize it. And there’s a glamor behind it, too. I got a chance to wear a gown at the end of the night and be a sophisticated lady.”

We should all be jealous. Apparently, folks in Austin can look forward to additional big band shows from Foster, say on New Year’s Eve. Most folks are unaware that Ruthie began as a big band singer while in the Navy, so she’s returning to those latent roots, hopefully to revive them again on another recording. We can dream but can savor this one in the meantime.