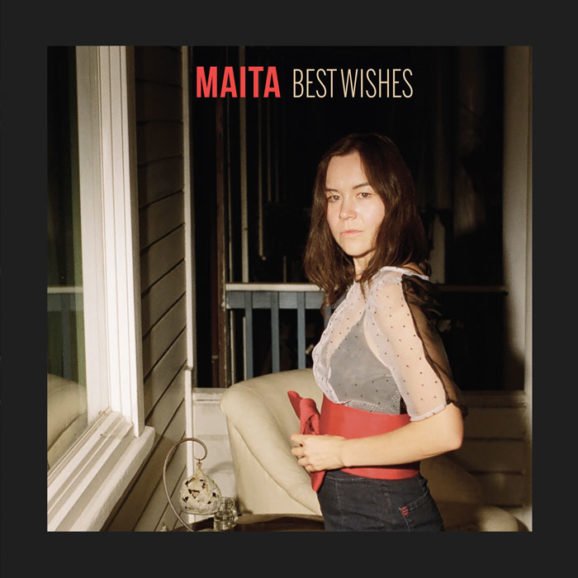 Maita is the musical project of Portland, Oregon-based artist Maria Maita-Keppeler. Like many musicians, Maita-Keppeler and her band had big plans around the release of their debut album Best Wishes. With a pre-release buzz already circulating after the indie rockers grabbed the attention of respected label Kill Rock Stars, there were plans to play album release shows and tour the country for the rest of the year. All of these plans have now been put on hold for the time being, but Maita went ahead and released Best Wishes anyways, giving us the kind of thoughtful and cathartic rock and roll album we all need right now.

Best Wishes kicks off on a high note with “A Beast,” a song that begins with a soft and dreamy shuffling folk sound before slowly building into a catchy chorus accented with crashing guitars and drums. “Someone’s Lost Their Goddamn Wallet” finds Maita-Keppeler delivering vivid, almost spoken word vocals backed by a punchy, tambourine-laden beat and reverberating guitar. On “I’m Afraid of Everything” – a song that feels especially apt with its tale of paranoia and fear – she balances intimate, confiding vocals with a soft beat and flourishes from a piano. “Can’t Blame a Kid” – an album standout – hits with punk urgency, vocals that feel reminiscent of Karen O, and a soaring chorus that would be at home on 90s alt rock radio.

Throughout Best Wishes, Maita-Keppeler and her band prove adept at balancing more quiet fare with catchy garage and indie rock sounds. We hear this on the meditative “Broken Down Boys” and the dark, mostly acoustic “Japanese Waitress” contrasting with songs like the bouncy, surf guitar-heavy “Perfect Heart” and the grungy rocker “Pay to Play.” Mixing poetry and metaphors with her own personal experiences, Maita-Keppeler often writes in a literal sense, constructing lyrical narratives that play out like mini musical vignettes. We hear these throughout the album, with a handful of songs stretching past the four-minute mark as the stories unfold, but it is perhaps best encapsulated in the album closer “Best Wishes, XO, Hugs & Kisses, Goodbye.”

As a whole, Best Wishes is an exciting debut, and Maita are at their best when they are joyfully rocking out. The more stripped down material on the album shows the band’s ability to keep their sound dynamic, yet it’s the louder songs that really shine and beckon you to see them performed live. It’s hard not to feel sad for Maita as they were about to release this special album, and they are certainly not the only band in this boat, but Best Wishes will leave you anticipating the time when we can all congregate to watch them perform.