Just as we said about The Delines’ The Imperial in 2019, an album that graced The Glide 20, in closing the review with “candidate for one of this year’s strongest albums,” we say the same about Sea Drift, which is even better. The Portland-based Delines are the musical collaboration of author Willy Vlautin and the deeply evocative vocalist Amy Boone. The backing band delivers a soft, minimalist, soulful, and mostly noir cinematic soundscape over which Vlautin’s stories about desperate characters unfold through Boone’s nuanced, emotive vocals. The subtle power is riveting, completely enrapturing the listener and leaving an indelible impact. Reference points are difficult, perhaps the closest is a slowed down, wee-hours-in-the-morning Dusty Springfield in Memphis or Tony Joe White in his “Rainy Night In Georgia” phase of his career and a touch of the tragic songs of Bobbie Gentry. These same adjectives again apply – bleak, mysterious, and somehow, stunningly beautiful.

The instrumentation that warmly bathes and underpins these songs comes courtesy of Cory Gray’s keyboards and trumpet, and his string and horn arrangements alongside soul bassist Freddy Trujillo and jazz drummer Sean Oldham, with Willy Vlautin on guitar and harmony vocals. This is the band’s third album, also following 2014’s Colfax, all three produced by John Morgan Askew, the linchpin to the cohesive sound binds all three. Askew also plays guitar, baritone guitar, and harmony vocals, and is joined by the three-piece string section of Kyleen King, Patti King, and Collin Oldam along with saxophonist Noah Bernstein.

The album begins with the single, the tender “Little Earl,” which has an accompanying video and a sound that defines the record. Vlautin says it’s inspired by a Tony Joe White groove and Gray’s arrangements set the tone for two brothers who get in a shoplifting incident gone wrong at a mini mart outside of Port Arthur, Texas. Like so many of Vlautin’s songs, the listener joins right into the middle of the scene. In this case with these opening lines – “Little Earl is driving down the Gulf Coast/Sitting on a pillow so he can see the road/New to him is twelve pack of beer/Three frozen pizzas and two lighters as souvenirs” with the rest of song having  Little Earl’s brother “bleeding in the backseat” as they drive along the coast, debating whether they should go to a hospital or just keep driving.

One of the most upbeat (a relative term in this case) tunes is the other single/video “Kid Codeine.” The song’s titular character “Kid Codeine,” has a boyfriend who is a boxer and is described as always wearing a perfect bouffant hairdo “just to walk down the street.” Vlautin’s inspiration was from a memory of a middle-aged bartender he met in downtown LA who took the guys in his last band, Richmond Fontaine, to a strip bar. She had a big bouffant hairdo and a twenty-year-old kid with her, a sort-of boyfriend. The kid never said a word. As the band sat in a booth this woman came to dance for them and she nodded out mid-move and crashed into the table. The whole time the bouffant woman was telling them how to bet horses in California. The music is set to a ‘60s French pop vibe inspired by the bouffant hairdo.

Sea Drift marks the first new material recorded by The Delines since Boone was in a brutal car accident in 2016 that hospitalized her for multiple years and delayed the recording of The Imperial in 2019. Thus, the gap between the 2014 debut. In 2019 Boone was still regaining strength but was able to help them finish the mostly completed record. Here, according to Vlautin, is the first time since her injuries that Boone felt strong and confident in the studio. In comparison to the last record, attuned listeners can sense the difference; there’s just a bit more conviction and nuance behind her singular vocals. The overused phrase, ‘most fully realized album” is appropriate in this case, given Gray’s most lush arrangements, Boone’s health, and the continuity of the process from writing directly into recording.

As the entire album reads like Vlautin’s short stories, we’ll offer a brief synopsis of each. “Drowning in Plain Sight” is about a woman escaping the pressures of family and her husband. Instead of going home, she makes a futile attempt to run away, wanting more than ever to recall what it feels like to be loved. It’s one of the best examples of Gray’s string and horn arrangements. The saddest track is “All Along the Ride,” with Boone’s vocal grimly detailing the couple’s conversation about a dissolving relationship as they drive along the Texas coast. The album takes it title from a lyric in the song, “sea drift,” an analogy for the dissipating bond of the couple. “Hold Me Slow” has a soulful groove and steady drumming from Oldham as Boone sings about a world-weary woman who is about to enter a stretch of good luck.

The brilliant “Surfers in Twilight” has a whispering half-spoken, half-sung Boone vocal that’s absolutely chilling. It’s the story of a woman in a coastal town getting off work and walking down the street to see her husband thrown against a wall and handcuffed by the police. She doesn’t know what he’s done, but she senses that he’s guilty. Here’s the closing lyric – “Flashing lights, flashing lights/The cops, the beach, the tourists, the suffers in twilight.” “Past the Shadows” is another bleak one, with this excerpt from the lyrics – “Let’s disappear past the shadows/Where only the damaged stay.”

“This Ain’t No Getaway” takes place at 6 o’clock in the morning when a woman returns to her ex-boyfriend’s house to get the last of her belongings – “There a half pack of Winstons and an overfilled ashtray/A pint of V.O. that’s nearly put away/And sitting on the TV is a loaded .38/He lights a cigarette and says nothing/Just stares out into space.” The last vocal tune, “Saved From The Sea” is the most romantic of the bunch, as the woman expresses tentative hopefulness – “He makes me feel like my life ain’t been wasted/Like my life ain’t just slipping away/ I really feel it.” The background vocals of ‘ooh, ooh’ are a classic touch. Two gorgeous instrumentals from Gray are pivotal to the album sound – “Lynette’s Lament” which comes at the midpoint and the closing “The Gulf Drift Lament.”

Use any adjective you want – stunning, devastating, captivating, or mesmerizing. Sea Drift sets the bar for the roots albums that follow in 2022. 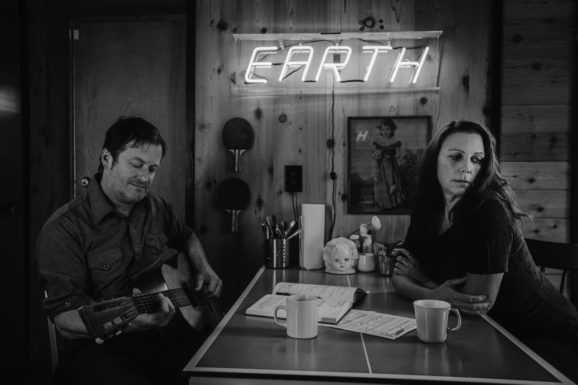