Why are so many people on the multilingual bus with Gogol Bordello? Because getting into them is as much as layered, depth-creating experience as it is the well-documented hyper-visceral one. That is, the more layers you peel back and the deeper you entrench yourself in what the band’s laying down, the richer the experience gets.

Your first time, it’s the spectacle: Eugene Hutz and his carnival of rampaging polyglots serving up a fusion of punk, klezmer, dub, flamenco, polka, rock, Russian folk, and all-out excitement. The second time, it’s the sonics and the styles: you learn to appreciate how the band draws out all those flavors and makes for an eminently musical show while keeping the theatricality—and energy—front and center. That’s what puts them in league with other cabaret punk forebears like Firewater and has already driven their popularity well past.

By the time the third, fourth, and beyond experiences arrive, you’ve investigated further the wry turns of phrase, the sharp commentary, and the cheeky wordplay. All the layers aggregate in the live show and you tailor the experience to your fancy: Maybe you’re engaging their lyrics and taking momentarily leave of the pogoing hordes around you. Maybe you’re rocking out. Maybe you’re reveling in the eye-candy—the synchronized bouncing in the background and the Bordello cast in the foreground that looks like it could just as well be one of the international pirate factions from "Pirates of the Caribbean" as the twisted authority on gypsy punk.

Doesn’t matter. Whatever commands your attention at whatever time during a "typical" Bordello rave-up, you can count on them to deliver. They do. Every time. Their New York homecoming—at the newish, spacious, intriguing club Terminal 5—cleared the high bar for set expectations, occasionally by several feet. Excitement was palpable long before they hit the stage; the line snaked all the way down West 56th Street on some rickety wooden platforms and concrete abutments, straight down to the West Side Highway—across which it would have easily cleared had it not hooked safely onto the cross-street.

It was chilly out, people were underdressed, and Terminal 5 is one drafty venue, especially on the third floor. But it’s also a fascinating place to see a show: muddled sound at times, but visually, with its battered furniture, stained tables, slick bars, Grand Guignol chandeliers, and scary-dark stairwells and other passages—ghosts of the space’s former tenant, the notorious Club Exit—providing the let-out feel of a warehouse crossed with the Addams Family mansion. You walk around and absorb, with lots of unexpected corners and nooks, interrupted light sources, and flourescent-blue hued bathrooms that seem repurposed from a Darren Aronofsky movie. It’d be jarring for a less extroverted act, perhaps, but for Gogol Bordello, it just added to the inspired chaos. (Credit the enterprising Bowery Presents group for the latest jewel in its crown, in other words).

On the third and second floors, when you could fight for a sightline from all the more laid-back fans standing on tables and couch cushions, the energy was only a little diminished. Down on the floor, it was a rager: sold out, of course, with splattered beers and bopping, churning bodies cheering every chorus and tempo crash-landing of "Wanderlust King," "Undestructible," "Ultimate," "Start Wearing Purple" and other favorites, and later, a near 30-minute encore segment that mined the best of "Super Taranta!" Gogol Bordello’s justifiably beloved latest album. You’d look up, and there’d be Hutz mugging with his lead violin player, or making eyes at Elizabeth Sun and Pamela Racine, the band’s singing/dancing/drumming priestesses, or, well, changing from sneakers to fire engine-red high heels (hey, why the hell not?).

As I exited the venue, a number of nearby fans expressed disappointment in the set length. They had to be a microscopic minority; 90 minutes is an ample playground for punk or any music relying heavily on fast-faster-fastest tempo gradations. On the contrary, the show might even have been too long: the experience of Gogol Bordello is so consuming—so exhausting—that it isn’t all that long before over-saturation bleeds into the feeling of needing a break or, worse, having a sledge taken to one’s skull. But if that’s the worst problem Gogol Bordello has—and after five shows in three years now I’m still convinced they’re one of the few circa 2007 live acts worthy of the term "essential"—then pass the vodka and herring, and try not to spill. 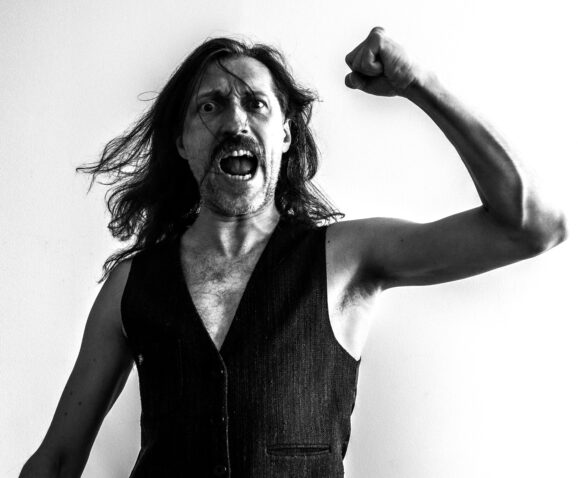