Irish singer-songwriter Fionn Regan released his new album, 100 Acres Of Sycamore worldwide this week through Heavenly Recordings / Cooperative Music, with the physical release to follow in early 2012. The album is the follow-up to last year’s The Shadow Of An Empire, and the title track is available as a free download here.

Self-made for little-to-no money, Regan’s debut The End Of History (2006) launched him to an international audience, earning a Mercury Music Prize nomination and gathering a string of big-name fans, from Lucinda Williams to Rhys Ifans, who has a tattoo of Regan’s lyrics. His second album, The Shadow Of An Empire, seemed to be a bit of self-sabotage. The young Irishman, having been hailed as “Folks’ new Pied Piper” went electric, with an album that, while critically acclaimed, confused some of his fans who were searching for something to sooth the soul. “Looking at it now, I think I wanted to kick up some dust…” But The Shadow Of An Empire was a necessary step. “If my last record was a chrysalis,” says Fionn, “100 Acres Of Sycamore is the butterfly.”

The butterfly began to emerge when Regan returned from touring, in a wilderness period that saw him travel on a pilgrimage of sorts to Deia, Majorca. A chance meeting with actress Anna Friel in Valencia, and a conversation about Robert Graves’ book The White Goddess, led Anna to invite Fionn to stay at her home in the ancient village, and most of the album was written there. “Being in Deia was like waking up inside the walls of a dream, as a place it had a profound effect on me” he says “the silver deposits in the mountains give them a luminous glow in the moonlight, I stayed up for days on end” says Regan. “I went to the edge in my head to a certain extent, and I documented it. These songs are essentially the wings which stopped me from falling to the rocks at that time.”

When it was time to record, he stuck by his belief of capturing things quickly and honestly. The album was recorded in seven days, straight to tape (with the same Calrec console The White Stripes recorded Elephant on) live, with all the players right there in the barn, honey-dripped strings and all. “The thing for me is to do things quick and to keep things simple, and you get left alone, all three albums have been made that way” says Regan, who, having once been hung out to dry by the Lost Highway label, knows a thing or two about the music industry. “If you take the dough, you have to be prepared to make bread.” 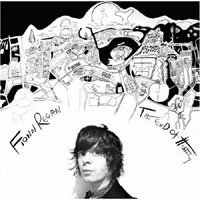 Fionn Regan: The End of History