Opening with a saturated pink conversation, sometimes split screen, sometimes not, with the panels arbitrarily switching back and forth, Izzy Gets The F*ck Across Town makes a bold declaration of the kind of film it is right off the bat. A punk rock, fast-paced, give-no-fucks neo-verite with a story that never really leaves the confines of its title — but doesn’t have to.

After the ambiguous and artful opening, Izzy starts to set the stage. The title character (a mesmerizing Mackenzie Davis) wakes up in a stranger’s house, with no memory of how she got there. The stranger,George (Lakeith Stanfied), has no recollection either, though the empty condom wrapper seems to imply that the two had sex.

Izzy, clad in an all-white caterer’s tux stained with blood, soon realizes, via Instagram, that her ex (Alex Russell) is not only having an engagement party, but is set to marry Izzy’s longtime friend, Whitney (Sarah Goldberg). This becomes her driving motivation to get from one side of L.A. to the other, crash the party, and declare that she’s still in love with him.

With her car still under the care of Dick (Brandon T. Johnson), an inept mechanic, she’s forced to rely on any means necessary to make it, as the title suggests, the fuck across town.

What unfolds is a kind of parable to The Wizard Of Oz. A solo journey across an unmarked yellow-brick road through neighborhoods she’s not familiar with, encountering a host of eccentric characters. While they’re too numerous to name, Alia Shawkat’s Agatha, Annie Potts’ Mary, and Haley Joel Osmont’s Walt all stand out with noteworthy cameos.

Things slow down just a bit when she arrives at the house of her sister, Virginia (Carrie Coon), and her husband, Bennett (Rob Huebel), who are having a party of their own. It’s there that the story takes a second to catch its breath, culminating in an acoustic performance the sisters deliver to the attendees. Though the relationship between the siblings was already mapped out in their limited screen time together, the expressions they trade while singing in harmony speaks volumes to how they feel about one another.

Earlier this year, Davis showed the world her acting chops in Tully, and she keeps her momentum up here as Izzy. Though her performance is certainly propped up by bouncing off the expansive supporting cast. Writer/director Christian Papierniack shows an impressive ability to wield an unconventional, often daring narrative in his feature film debut.

Ultimately, Izzy Gets The F*ck Across Town is a fantastic experience that deserves more attention than it will likely receive. 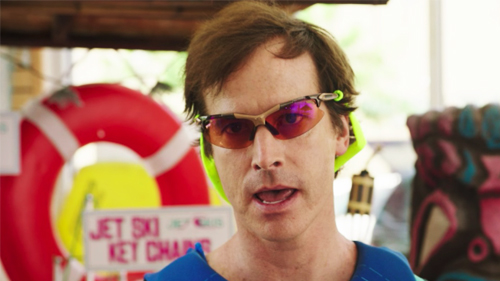