It was an anomalous cloudy evening on Thursday and Phoenix downtowners were excited by both the cooling weather and the sold out Crescent Ballroom Grouplove show.  Making their second appearance at the one year old venue (opening back in April for the Givers) and now headlining, the LA based band is still touring in support of their successful Never Trust a Happy Song album,  released  in September 2011.

The evening started out with Papa, also hailing from L.A. with Darren Weiss (also of Girls) filling the role of drummer and lead vocalist.  The rails separating underage section from the drinkers stretched across the center of the stage, accommodating for a larger underage crowd than usual.  For the most part, this divided the audience into Papa fans on the over-21 side and the Grouplove fans on the underage side.  Although Papa’s music is slightly more mature than the bouncy fun of Grouplove, it was an energetic opener with plenty of interaction between Weiss and the crowd, and a couple of intense moments when he managed to knock away his vocal mic while banging out a more explosive drum run.

After a break for stage setup, Grouplove came out in a very explosive walk-on, complete with strobes and excerpts from the Kanye West song “Monster,” Led by bassist Sean Gadd, who leaned into the crowd and screamed along as the song switched to a version of “Pure Imagination” from Willy Wonka.  After a “Phoenix, are you with us?” which received a loud roar in response, they began with “Itchin’ On a Photograph.”  After a very memorable entrance, the show remained at that high level of intensity throughout the night.

The stage decor had several circa 1980-style lamps, and bright strobes beaming from the back.  In a typical rock band setup, Grouplove’s stage equipment consisted of drums, keyboard, bass and guitars, with Hannah Hooper as both singer and dancer.  At some point, four of the five members of Grouplove played the role of front-man.  Self-described as “funge,” (think grunge for people who smile) guitarist-singer Christian Zucconi’s attire and shoulder length blond hair even resembled a younger, more clean-cut Kurt Cobain.

The crowd’s energy stayed high and intense throughout, thanks in part to Hooper’s ecstatic dancing and fascinating wardrobe.  Donning a skeleton body suit and masks on occasion, she managed to continually jump around and still sing well.  In homage to the masks that Hooper had worn in the past, three fans in the crowd held up large signs of masked faces that they have seen the female singer wear before and the held them up during “Naked Kids.”  “You guys are incredible!” responded Hooper at the end of the song.

After about an hour of playing, the band stepped off for a moment, and as they came back for an encore, Rabin asked the audience to be silent for their next song.  With absolutely no microphones or amplification, and just a single light beaming up from the ground at them, they performed an entirely acoustic “Cruel and Beautiful World” at the front of the stage.  The band was arm-in-arm singing harmony as Zicconi strummed a guitar.  Afterwards, with full production back on, they performed a jumpy  rendition of Whitney Houston’s “I Wanna Dance With Somebody”  followed by their hit , “Tongue Tied” and finally finishing with “Colours.”  The entire show proved to be wholesome fun, as even the older Papa fans were impressed by the energetic performance. 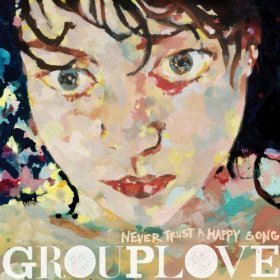