Walking into The Joint on a chilly Las Vegas Friday night, even I wasn’t sure what to expect from Guns N Roses 2012, but what I saw and heard for two nights of three  hour music marathons, was just that. If you didn’t make it out to Sin City to catch one of the shows during the band’s month long residency, you missed something special.

Friday night was certainly the most electric of the weekend. Firing on all cylinders beginning with Dj Ashba rising from behind the drums and igniting the title track from Chinese Democracy to over three hours of hits, surprises and solos, Guns took the reins and balls out rocked it.

This is not your old school GNR. Those days are gone and need to be put aside so that you can enjoy what this band has to offer. If you live in the past too headstrongly, you will miss the finer points of the musicians that Rose has assembled and what individual nuances they bring to such songs as “Sweet Child” and “November Rain.” They are not automaton players set up on stage to reenact the classics note for note, although they do try to keep the originality and integrity of said songs. It’s really on the newer material, a la from Chinese Democracy, an album that was vilified unfairly for the most part, where GNR comes to satisfying fruition.

Ashba and his guitarist brothers Ron Bumblefoot Thal and Richard Fortus are all proven talents that excel on such songs as “There Was A Time,” “This I Love” and “Madagascar.” Frank Ferrer adds a definite strength to the backbeat, much harder than Steven Adler and Matt Sorum combined, giving the band an edge that connects directly to Tommy Stinson’s punkish roots. And Dizzy Reed has developed into a purveyor of beautiful piano melodies that would seem out of place at a rock concert but add a breath of fresh air amongst the pyro and dancing girls that are extra flavor during the show.

It is finally time for the haters to stop hating and give this band a fair chance. All original members of Guns have independent bands of their own now and wish for the same chance to be heard as an entirely new entity in their rock & roll careers. Just because Rose has chosen to keep the GNR moniker, it has allowed the critics to compare to the nth degree. If the band that just had a successful whirlwind major world tour and popped a squat on a Vegas stage for the month of November roamed the Earth under a different name, would Fortus/Ashba/Thal still be compared shamelessly to Slash and Izzy? Myles Kennedy has been welcomed into the Slash fold, singing old GNR songs in his own personality. The same should be allowed for the members of GNR 2012. Burning the banner in a red hot effigy has grown old and tired, much like that t-shirt you bought in 1991. They are far from perfect but they are a million miles away from sucking.

The big production brought to The Joint for twelve performances was full of energy. Rose’s voice was a strong healthy force, able to hit – and hold – notes all night. He wore a smile more than not and shimmied and swayed with some of the dancers on the catwalks that protruded out over the crowd. “We got more fun than you got time,” he told the crowd as they neared the end of their regular set, a good two hours plus in. Only once did I notice Rose appear a bit out of breath but he revived quickly and tore through a 30-plus song setlist. If you love the Gunners’ catalog, he gave it to you.

Below is a list of highlights from the first night:

“There Was A Time” during the encore was epic, sparking from the get go with Bumble’s red hot guitar that kept rising until you thought you couldn’t take any more. It was like being caught in a tornado. Excellent.

“The Seeker,” an old Who song that Guns took as their own.

The guitar jam between Fortus and Ashba that led into a ripping version of “Nightrain.”

The mammoth “November Rain” featuring Rose on a piano that floated out over the crowd and was intro’d in with “Another Brick In The Wall” and ended with pouring down flames and explosions.

“This I Love,” featuring one of Ashba’s best solos.

Bumblefoot spiting and sweating through “Glad To Be Here.” Definitely a crowd favorite.

A rare run through of “Catcher In The Rye.”

An Axl-led “Happy Birthday” sing-a-long to Ashba after midnight (his birthday was Saturday). “You don’t look a day over 85,” he joked.

And a powerful rendition of “Madagascar,” one of the best tracks from Chinese Democracy.

Saturday night proved to be a special night for Ashba, as reiterated in part 1 of this series. With another band/crowd serenade of “Happy Birthday,” Ashba was noticeably having fun. Climbing up into the VIP seats to frolic with Carrot Top as he played and interacting with fans in the crowd, his smile was bright and his playing had an extra oomph. And during “Street Of Dreams,” Bumble brought out Katie’s handmade birthday sign.

Fortus was also getting lost in the moment, coming more alive with each song and running the stage more than he did the night before. With his intros to “November Rain” and “Nightrain,” his spotlight segment which ran the gamut of country & western to 70’s arena rock to some banjo-like picking, and the aforementioned jam with Ashba.

Although the setlist was predominately unchanged from Friday night, Guns did pull out the AC/DC staple “Whole Lotta Rosie,” a fun song no matter who covers it, to give the encore an extra one-two punch of adrenalin alongside “There Was A Time,” “Patience,” “Madagascar” and “Paradise City.”

“You Could Be Mine,” “Live & Let Die” and “Knockin’ On Heaven’s Door” all were stepped up a notch, as was Stinson’s lead vocals on “Motivation.” Chris Pittman almost gets lost in the shuffle but has a chance at some recognition during the drums/keyboards spotlight about eleven songs in.

“Could I get a round of applause for the band,” Rose announced following Bumblefoot’s turn on vocals Friday night. “They get a lot of shit from you guys.” He has never spoken truer words. And if you take a moment to listen with unprejudiced ears, you just might find that this version of Guns N Roses has more to offer than you have ever given them credit for.

This is part two of a three part series from the GNR residency in Las Vegas. In part 1, we talked to Dj Ashba and in part 3, we talk with Richard Fortus. 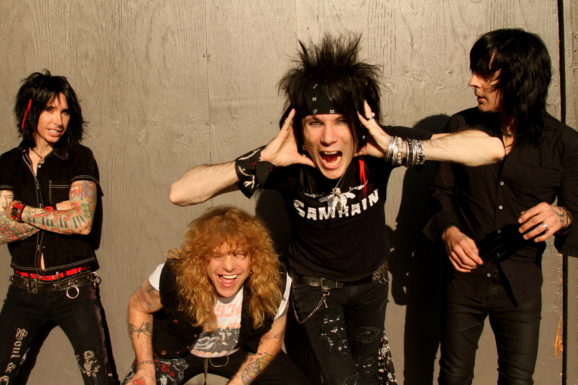