SONG PREMIERE: The Buttertones Churn Out Sublime Post Punk On “Fade Away Gently” off ‘Jazzhound’ LP 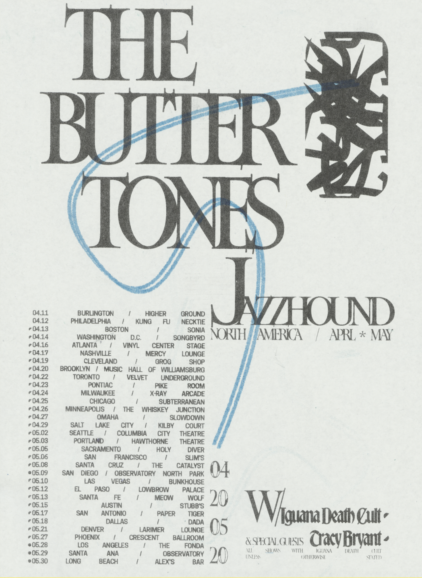 Before settling in to make Jazzhound, their most extravagant, ambitious, and fully realized album to date, The Buttertones had to face the hounds of real life. Prior to a headlining summer tour in support of 2018’s Midnight in a Moonless Dream, a fiery blast of an album capturing the band at their purest distillation, drummer/multi-instrumentalist Modesto ‘Cobi’ Cobiån had a sudden and serious medical scare involving his eye, requiring emergency surgery. He lost half his vision (it will hopefully return with a future operation), and the tour had to be canceled. Music took a backseat for the time being.

“It gave us some perspective on our health,” says bassist Sean Redman, “and the fact that we have to look after ourselves and one another first, or else the music just can’t happen.” Cobiån, Redman, and vocalist/guitarist Richard Araiza have been playing together for seven years now, having first come together for a self-titled debut in 2013; along with London Guzman on sax and keys, they’ve come to establish themselves as one of L.A.’s tightest groups, conquering stages from Coachella to Tropicalia. When one of their own had a scare, they rallied around him—and used the experience to come together stronger than ever for the record they were getting ready to make.

“He says the eye patch adds charm to his character,” jokes Araiza, who led the Buttertones back into writing mode, taking the reset moment to really focus on the approach and style of the record. The material he was working on took the band forward into a heavier sound—and it also brought them back to the spark of their first album. “It allowed us to go back to the roots and the spirit we had when we started,” Redman considers. “We are kind of a new band, in a lot of ways, is what it feels like.”

Continuing their partnership with producer Jonny Bell of Crystal Antlers, who produced Moonless Dream as well as 2017’s Gravedigging, the Buttertones waited until they were good and ready before hitting the legendary Electro-Vox Studios in Hollywood, where they arrived knowing exactly what they wanted to lay to tape. Armed with an arsenal of the most propulsive music they’ve written yet, the band recorded the album mostly live—an ideal method for capturing their cult-status live show, which carries on the torch of acts like the Walkmen and the Fleshtones. “We’d do a few takes,” says Araiza, “and then it was, ‘Alright, we got all the main instruments done, now let’s record on the vibraphone that was used on Pet Sounds,’ you know?”

But Jazzhound is completely new territory for the group, too, with Araiza, who calls this album “probably the darkest one” he’s written lyrically, pushing his Ian Curtis-via-Bobby Darin baritone to new depths, particularly on scorchers like “Phantom Eyes” and “Bebop.” It’s also the first album with Cobiån acting—and thriving—in his new role as a full-time guitarist (the drum parts were written by him and played by session musician Paul Doyle), and the first since the departure of guitarist Dakota Boettcher as well.

“We really worked our asses off on this one,” says Araiza, proudly, already talking about how he can’t wait to do it all again and make another record soon—after they tour the world, that is, making up for the lost dates last summer, and then some. “It feels like we’re still climbing.”

Glide is thrilled to premiere “Fade Away Gently” a dirty whirl of post-punk, surf and brainy art-rock, featuring thick bleeding guitar tones and gorgeously wistful vocals. With a curious sound and even more legit presentation, here’s to 2020 being The Buttertones breakout year to climb amongst post-punk upstarts Idles and Fontaines D.C.