On Saturday, April 23rd, at The Brooklyn Bowl Philadelphia, British Hard Rockers and Glam devotees The Darkness entered the home stretch of their North American tour, playing the 33rd of their 34 shows supporting their 2021 album Motorheart. They would conclude on the 24th in Boston with a European tour beginning in June 2022.

All-female Southern Rock trio The Dead Deads opened and played a very strong set delivering the outsize sound of a much bigger band with some memorable song structures. Their performance included new song “Dead Inside”, which they wrote after the Easter is Cancelled Tour was, well…cancelled, almost two years to the date from the night’s performance and managed to record in the meantime. Now they were nearing the homestretch, also, having supported The Darkness on all their North American dates so far. They also covered Pink Floyd’s “In The Flesh” with original flair and had the audience (some of which had turned up extra early to hear them, lining up outside) fully rocking by the time The Darkness took the stage.

It’s almost certainly an emotional experience for most bands right now to complete a tour without unexpected circumstances knocking things off track, but for The Darkness, a band very well known for their live shows particularly in Europe, but also in the USA, this was a tour to bring some closure to their scuppered 2020 plans to support previous album, Easter is Cancelled, with a US tour. The Darkness brought out a mass of clearly dedicated fans (many clad in band t-shirts before reaching the merch booth) with a 16 song set in Philadelphia that took in their entire discography.

Though Easter is Cancelled got only one song, “Heart Explodes”, Motorheart got a strong showing with three songs, but a particular favorite seemed to be songs from 2003’s Permission to Land. Could it be that the band were already looking toward that album’s 20th anniversary? Fittingly, they also opened with one of their newest songs, “Motorheart” and closed with their youngest song of the night, “I Believe in a Thing Called Love” from 2002.

Though fan-beloved antics and theatrical behavior are the express expectation for a show with The Darkness, that is not a stand-in or distraction from the music that this band creates and performs. Their hard-rocking latest album Motorheart is no exception, which was apparently written with live performance in mind, and hearing those newer songs alongside older favorites did show off their musical chops when moving a little further away from melody-driven vocals and Rock guitars and further into high-speed rhythm and guitars and even more nimble vocals.

Some of the particularly memorable performances of the night were “Solid Gold” from 2017’s Pinewood Smile (and there were several songs from that album featured in the show), “Givin’ Up” from Permission to Land (2003) where Justin Hawkins introduced a kind of jig dance to proceedings, and a pretty open discussion with the audience towards the end of the set about the history of the song “Get Your Hands Off My Woman”, also from Permission to Land, which upon released in the United States required a sanctioned “Walmart version” with cleaner lyrics and pixelated artwork to cover nudity.

After noticing a couple of children at the show, Hawkins discussed the merits of the “dirty version” of the song and it was voted in. During this time, Hawkins also did an impressively long headstand on the drum platform as well as (later) doing operatic vocals to be echoed by the audience in Freddie Mercury style, as well as persuading fans to link arms and sway along with the song.

Leading into their encore, Frankie Poullain also amused fans by playing his bass by running it along the mic to create distorted effects which was only upstaged by Hawkins coming onto stage in black briefs and a hat with a “chin strap made for jumping” for their final number.

Fairly surprising in this day and age was Hawkins’ fairly gentle, but repeated insistence that fans put down their phones before they’d begin “I Believe in a Thing Called Love” and cease recording and taking photos for the duration of the song. It may have been due to his revealing costume but it felt far more like a throwback to the days of bands interacting directly with fans without the interruption of screens at shows. The song was definitely a little more poignant without the distracting glow of phones.

There’s a wider context for some of this fan interaction from Hawkins, in case you haven’t come across it yet, and that’s Hawkins’ growing fandom on Youtube where he produces comedic but also earnest reactions to different types of music and holds musical discussions, in general. If that sounds appealing, you can check those out, too, at Justin Hawkins Rides Again on Youtube. 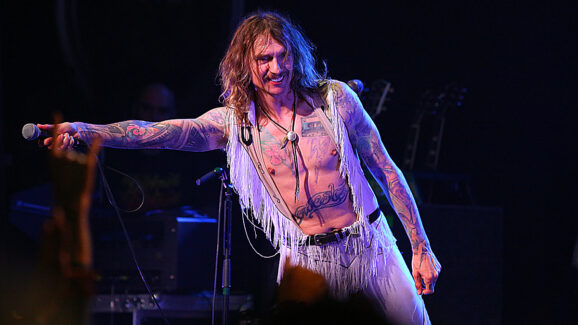 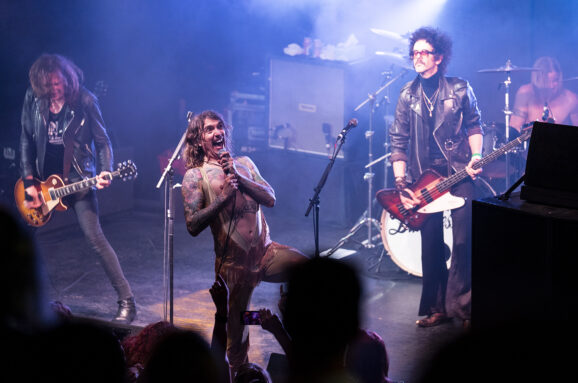