Torpedo Boyz, “Headache Music" (Sounds From the Roof Records)
Funky, kinda crunky Europeans with refreshingly major attitudes (all the funnier given their Ahnold accents), Torpedo Boyz are a lot like 70s funkadelica as seen through a Felix Da Housecat prism.  There are plenty of layers going on, which gives weight to anything nowadays, but they’re irrepressibly modern in their approach, sort of like someone taking a baseball bat to all those poopy, quasi-ethnic hack bands that wouldn’t be polluting your local yuppie dive if they didn’t have a million friends.  Blaxploitation trumpets battle turntablist wetware, samples fight for space with plonked bass, the singers repeating doofy catch phrases for entire song-lengths.  Feel the ’64 Impala, brothers and sisters.Order from Amazon.com

Clouds, “Legendary Demo" (Hydra Head Records)
It’s endlessly tragic to hear young suburban kids proclaim that 30-year-old bands like Zep and Sabbath are the only things worth listening to nowadays, especially with bands like this around.  Influence-wise, Clouds are into MC5 and that kind of trip, but whether or not their sound concurs isn’t so much the point; they’re properly unhinged like Wolfmother but tightly knotted in the right places, and Adam McGrath’s bliss-jacked rippage on both guitar and vocals is less evocative of Boris than early Blue Oyster Cult (on “New Amnesia”).  Inspired by all the bloozing going on, McGrath eventually settles on a vocal sound that’s a dead ringer for up-and-comers The Sword, but that’s all the similarity to such semi-lost indie hard-rockers you’ll find here – these guys are in the same weight class as End Of Level Boss.  There is hope, kiddies.
Order from Amazon.com

Get Set Go, “Selling Out & Going Home" (TSR Records)
Unfortunate timing for such a moniker, yes, infinitely so being that these guys are so much better at everything than their tuneless, corporate-alt-bot competition.   OK Go may have the nu-mod dorks and TGIF Corona-burpers in their back pocket this fiscal quarter (and worldly art connoisseur Jimmy Kimmel waddling around claiming he “really likes” them), but they’d never be able to pull off a Kinks-vs-Who thing like this, let alone measure out the right amount of Dropkick Murphys to add in order to make it slam-dunkedly pub-worthy, not to mention the fact that the Get Set Go chaps look a lot more “what, no free trail mix in this dump?” than that inexplicably enthusiastic Abercrombie knockoff.  Not for nothing, but Get Set’s got a lot catchier material, too, legitimately sticky stuff that doesn’t need twenty force-feedings to get one lonely head bobbing at the pool tables.  All for naught, of course, if they don’t change their name on the double.
Order from Amazon.com

Chadwick, “Blood Soaked World" (TSR Records)
Misogynist gothies advertised as a cross between techno and a bunch of other stuff, but what you’ll hear depends on your mood at the moment:  it’s either the next Bauhaus or utter, utter bollocks.  Recorded in an outhouse most likely, the production values are what you’d expect from a band on pretty much no budget at all, and if there’s supposed to be synth on every track it’s a mystery where it is, not that it’d make much difference what was going on in such a cacophonous racket.  But as referenced above, there’s a Bauhaus element afoot, unforgiving in its badass grooving, scratchy/meaty guitar and antiestablishment production.  In a parallel universe they’re probably lord high masters of the underground.
Order from CD Baby

Various Artists, “Elaste 1: Slow Motion Disco” (Compost Records)
Decent but woefully overlooked dance music’s been around longer than the Charleston, if for no other reason than that the planet’s C-student mentality demands that its cutting-edge art survive a minimum of five years gestating in safely out-of-the-way places like Manhattan to work off any verist energy that may be hiding in its pores.  Superstar DJs and their associated wannabes, whose stock recently started plummeting like a bag of Buicks once people realized that paying $45 to watch someone play records for 30 minutes was possibly maybe a ripoff, are running up the flagpole for weird-ass records to add to their rucksacks, Munich’s DJ Mooner being the perp in this case, holding mid-70s Italian Cosmic songs up for a public yea/nay.  Mooner wants critics to say things like “that’s some wild beats, man,” but it basically reads like disco that didn’t blow up for whatever reason, most likely because it doesn’t do much.  Nice as it is to know that Donna Summer wasn’t the only diva alive in 1975, there may not have been a good reason for it.
Order from Amazon.com

Switchfoot, “Oh Gravity" (Columbia Records)
Since they assuredly don’t suck, Switchfoot can be forgiven for riding Jesus’ coattails into major label semi-legend status, that show-biz dreamland where Keane is bigger than U2 and Muse gets to tour with Queen for two years straight.  Still trying to shake off their born-again-virgin Xtian fankid minions (now more than ever their press soundbites are devoutly Unitarian, and you can literally feel them squirm), they’ve managed to scrape some very worthwhile (even lo-fi at times) AOR-post-punk together, not the easiest feat being they’ve only taken a year to mull it over.  Unlike the antidepressant-popping Nothing Is Sound, Oh Gravity is more grounded in hard pop, relying on emo bludgeoning, Powerman 5000 cold-clocking and latter-day Ramones stomp to prove that, hey, they were just kidding about their generation being a bunch of wastes.  Plenty to like here either way, from the Socialburn-esque “American Dream” to “Awakening,” which wants to be Beck, to the more-garagey-than-thou “Amateur Lovers.”
Order from Amazon.com

Tristania, “Illumination" (SPV Records)
One thing you learn in Music Critique 101 is never to trust press releases.  If a press release promises a band sounding like “the second coming of David Bowie” – particularly if the blurbage came from the keyboard of a random-praise-generator guy/guyette from Spin or Rolling Stone – you can expect something that’s a lot like Babyshambles, or worse, if there is such a thing.  This here “Evanescence-soundalike” dame, Tristania, a completely unachievable megahottie from Norway, doesn’t have a Marky Mark boytoy tossing asexual counterpoint lines at her, just some out-of-work kraut-rock vampire-baldy, and what this really sounds like is Elise, but since you’ve never heard of that band it’s a not-totally-laughable unreturned high-five to Sisters of Mercy, Nephilim and Lacuna Coil, swiping Sarah McLachlan’s “I Love You” along the way to prove that Tristania is aware that there is a device called a “radio” and that it plays music.
Order from Amazon.com
Fujiya & Miyagi, “Transparent Things" (Deaf Dumb & Blind Records)
NME darlings who’ve found themselves venturing beyond the tremendously challenging 4/4 of refried motorik grooves into condensed indie-soup for the angstful soul that sounds exactly like the Lilys trying to be serious about structure.  In order to remind people that these 100% non-Japanese limeys are into Kraftwerk and motorik in general, “Ankle Injuries” boots the album up with an utterly disaffected stream of drone-alt best befitting MTV strobe-action brain-dada that screams for no particular reason I’m At The Wheel Driving And The World Is Changing Instantly and Completely Every Eighth-Of-A-Second.  Most of the rest of this is Gil Mantera-style innocuousness, breezy like Donovan without the importance, drum patterns that don’t require fan-cooling of the 808s and whatever other common chintz they prefer, so unobtrusively catchy that you could picture Jessica Biel and five other Jessica Biel-things listening to it as they cruise along, oddly enough with no one holding any X, in an SUV toward certain doom at a makeout-getaway cabin on Alien Brain Parasite Lake.
Order from Amazon.com

Clinic, “Visitations" (Domino Records)
Very little gray area here: if you like the idea of Clinic in its base form you’ll sign right up, elsewise you’ll be holding out for whatever aspires to such greatness.  Out of the gate (“Family”) you hear what amounts to Thom Yorke stammering angry gibberspeak while stumbling out the nuthouse exit in a Tornadoes tee shirt, convinced he’s the human embodiment of a 12-cylinder “Bron-Y-Aur Stomp” – Ade Blackburn is serenading a god of something somewhere, but happily no one can understand a bloody thing he’s saying, so it’s definitely something positive.

In “Animal/Human,” we find our blessed, surgical-masked limeys gathered around the campfire, banging tambourines and chanting outright now, and even when they shut down the autoharp and incidental skronk to go a capella the lyrics may as well be the phone book, although the word “tell” is clearly in there, which must mean something. It’s a record with the potential to create an army of boombox-carrying indie-goober Radio Raheems, each bopping around Greenwich Village replying to second-guessers with an impatient “But I don’t LIKE nuttin else.”
Order from Amazon.com 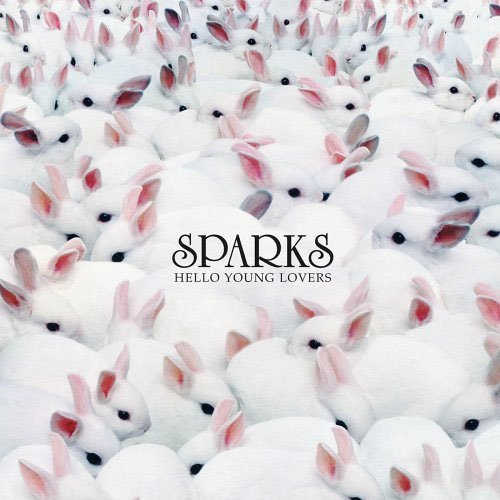 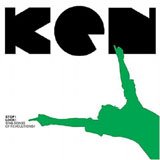 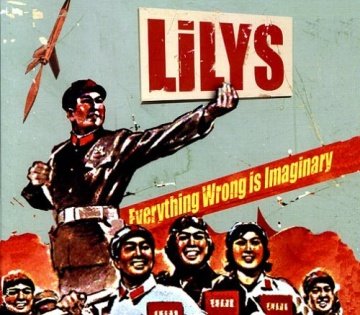 Lilys: Everything Wrong Is Imaginary