Ultra Records will continue dictating the modern dance-club paradigm until further notice; the compilations the imprint churns out invariably focus on who’s-who remixes of the world’s biggest songs.  In March, to cite just one example, Tommie Sunshine compiled Ultra Rock Remixed, which included techno-fied versions of tunes from Good Charlotte, Glitch, Mindless Self Indulgence and Gang of Four.  Sunshine’s a weird guy, with his ZZ Top look and never shutting up about his love for his hot girlfriend, but he’s a go-to guy in that space, as DJ 4 Strings (a 2-man collaborative fronted by Carlo Resoort) is within the realm of progressive trance.

If you’ve been out of the scene for a few years, you’re advised to listen to a few samples before committing to this album.  4 Strings is into progressive trance, a major jump from traditional trance, which is characterized by its hyperactive thumping beats and anthemic melodies.  Progressive trance has a much more subtle way of implementing high BPM (beats per minute) counts, thus if you’re expecting crazy-ass stuff like Darude’s “Sandstorm,” you’re going to be bummed.

Thin White Duke retrofits Gwen Stefani’s mid-tempo ghetto-torch “4 in the Morning” with a lot of extra blips and whaps and maybe one or two upticks in overall speed, but it comes off more as a glorified house tune than a laser-blasted mind-blower.  More obvious is the Vission vs Aude remix of Hilary Duff’s “Stranger,” which is without question general-issue house.

So it goes through disc 1, the most action coming from Tiesto’s original “Break My Fall.”  Disc 2 is more enticing going by the track list alone – Above & Beyond have the progressive trance genre down better than anybody, and their “Good For Me” is a sight for sore ears.  Other pay-attention names on disc 2 include Sander van Doorn (with the original “Grasshopper” in all its cataclysmic, system-crashing glory) and Armin van Buuren’s hard-charging “This World is Watching Me.”  Speaking of van Buuren, keep in mind that his more traditional State of Trance albums are the ones trance-heads buy up without hesitation;  the progressive trance thing is cute and all, but it’s ripe for creating mass confusion, which has indeed happened on more than one occasion.

A no-brainer choice for NPR freaks, and in fact the band – formerly the Goran Ivanovic Group – made an appearance recently on the network.  Ivanovic is a Croatian guitarist, joined here by flutist/saxophonist Doug Rosenberg to manage all the harmonics, which are in turn backed by top-drawer jazz bass and drums.  The deal here is a pastiche of pan-cultural folk music (Middle Eastern and East European, mostly), classical and Spyro Gyra-style jazz-prog, a mishmash broad and Hollywood enough to have gotten the band a few spots on the soundtrack for Angelina Jolie’s Wanted.  Being that it’s Ivanovic’s vessel, we steer into Django Reinhardt speed-picking waters first off with “Tango Pajdusko,” a few Borat-like passages sneaking in to spell out “eclectic” for listeners unfamiliar with the concept of polyrhythm.  More Borat on “Balkan Healer” didn’t impress me as much as “Sorrow’s Secret,” a slower piece that’s symphonic in scope. You’ll have to pardon a short curmudgeonly segue here.  A lot of people would die for this stuff, and it’s won a lot of recognition, but if it was made for anything, it’s NPR program-reminder wallpaper, which bums me out – I’m getting quite weary of the network’s tacit cheerleading of the ongoing Bush crisis, but don’t mind me.

Hurt didn’t hit the New Artist chart at #1 simply because their drummer’s the son of Zep/Van Halen producer Andy Johns; they’re worthwhile because they treat nu-metal like the urinal it is.  Best described as a cross between Live and Candlebox, they’re organic without telegraphing such, like a crew of hillbillies out to throw a monkey in the wrench of a Linkin Park listening party, sort of like Dropbox but with real purpose in life and no sourball-puckered Creed vocals.  Their entire trip can be grokked for what it is through a few listens to teaser single “Ten Ton Brick,” a drag-and-drop exercise in ringout riffage, Ozzy arpeggios and front-guy J. Loren’s feigned instability.  When in ballad mode, they don’t screw things up by playing fist-in-the-air cartoon characters, this demonstrated in “Aftermath” through simple but wonderfully ambient piano/guitar interplay and Loren’s fragile – occasionally croaking – normal-dude vocals; the song works not just on the level of Bic-flick arena-metal-stopper but could have made it onto any modern pop record.  Only misstep is “Abuse of Sid,” whose refrain is pure Candlebox filler.

Creature Feature, The Greatest Show Unearthed (Sumerian Records)
The demographic that goes in big for Corpse Bride can jump right in and start bobbing its collective head to this wholly similar product. Firmly rooted in visual imagery – from say a Maurice Sendak-inspired Tim Burton re-energized for a go at whimsical goth cartoons – it’s comfort food for the ears of pancake-face hallow-teens and people whose collections of Famous Monsters of Filmland magazines are pathetically gigantic (guilty). Old-school kraut-electro outfit Das Ich feinted in this direction with their 2006 album, Cabaret, but couldn’t muster the conceptual nerve to provide the record the constant barrage of honking calliope and carnival barker bullhorn it needed, but Creature Feature (presently on tour with Wednesday 13, goth’s answer to Iggy Pop) are burdened with no such qualms, trotting out all manner of squishy, bony, needle-fanged Muppets doing a lot of Nightmare Before Christmas-like la-la-la-ing accompanied by 80s synth lines straight out of Lost Boys and Fright Night.

It’s odd that Otep Shamaya, after being freed from her Capitol Records contract and handing her life over to the world’s biggest indie, chose to skip the glaze-eyed spoken word babblings that put her on the map.  Not completely, mind you; she goes into a Saw-vs-martians stream of consciousness soliloquy for the entire length of the hidden track, and she’s still the spookiest person in metal, what with her Lucia Cifarelli-like puma-screeches and beware-the-nutty-chick hiccups hot-linked to every song.  But this is a comparatively straightforward screamo/nu-metal exercise, which in turn puts the burden on her to make her (always creepy) poetry heard over fast-chugging KMFDM guitars and double-bass breaks; sometimes it works, sometimes you miss the wigged-out spontaneity.  Music-wise the band remains edgier and more slickly produced than anything the Metal Bladers are knocking together between band-member firings; in “Confrontation” she makes a play for the Evanescence kids, blending goth and sheer hardness with riffing you might hear from Megadeth.  Similarly, “Noose & Nail” throws its Amy Lee pomposity into an industrial-metal blast-furnace in time to prevent it from becoming completely useless.

Until recently, a greatest-hits album from someone who spins records for a living would have been near-unthinkable.  Oakenfold, however, is held in higher esteem by the mainstream than even Tiesto, never mind guys like Paul van Dyk.  A lot of this stuff you’ve heard if you ever watch movies – “Dread Rock” is here in all its Darude-like power-flute glory, as is his remix of David Arnold’s James Bond Theme from Die Another Day (in turn cleverly paired up with the like-minded spaghetti-secret-agent guitar of “Ready Steady Go” from the Korean disco scene in Collateral).  Other material here is lesser-known to non-wonk dance-clubbers – English techno band Underworld recently released the hypnotic, very danceable album Oblivion with Bells, and the band’s autobahn-cruising “Born Slippy Nuxx” received an Oakenfold makeover that’s part of this package.  Massive Attack’s urban-desperation-opus “Unfinished Sympathy” may not have been my first choice to get remodeled into a deep house joint (just picture “Karmacoma” getting its brains dubbed out), but then again, if rock critics ruled the world you wouldn’t want to be in it.

The single nicest surprise so far this music-product off-season is, perplexingly enough, Canadian.  Maida, the singer for Our Lady Peace, watched his band run the table at Canadian awards shows and rack up sales everywhere but here in the US, where their biggest exposure came via the song “Whatever,” which, as luck would have it, crazy-murdering steroid-gulper Chris Benoit adopted as his WWE intro song.  The band progressively toned down their hard rock, story of everybody’s life, but that didn’t play in Peoria either, so here he’s gone solo to see what American lovin’s in store by edging a little toward the hip-hop side.

That’s not to say he’s decked out in grills nowadays, but the menacing piano loop in album roll-out track “Careful What You Wish For” does forebode gat-fire and hard pipe-hittin’ hood tales.  It never deteriorates into in-your-face honky rap, though; Maida mixes a few unobtrusive, natural rhyme-flows up with his Sinex-blasted nu-metal croak, sounding nervous but musically aware.  “Yellow Brick Road” is a drop-dead post-Beck hit that seems to have simply slipped out of him; great chorus and enough hip-hop to inspire bursts of table-drumming in the sports bars down here in Bushworld, one would think.  Just in case, though, “China Doll” tables a little French-café alt-folk for the home crowd.In sum, the album’s a grower if given half a chance, familiar but a little dark and cold and unsure of itself, although it really needn’t have been.

No matter what cultural vacuum Sebastian Bach gets sucked into, he always runs back to his beloved Screamy Screamington thrash and axe-demon crunch.  There were the Broadway turns, the Gilmore Girls episodes, and the reality TV BFF heart-to-hearts with Kurupt, but you didn’t seriously think that a massive shift of artistic paradigm was taking place in Johann’s head, did you?  Plus, for a while there it looked like Guns n Roses were going to get back together, and there was no way Bach was gonna sit still while those guys ran off with all the hot Mensa babes.  Besides, we all know that those art-snob departures were heartfelt but overdone atonements for the Homophobic Slur On The Tee Shirt Incident back in ’89.  But I won’t mention that.

When Velvet Revolver was forming, Slash gave Bach a tryout but canned the idea, saying that the sessions sounded too much like Skid Row.  Jeez, what was he shooting for, Collective Soul?  Because that’s the thing – if Bach’s the singer, it’s Skid Row.  QED, then, Angel Down is a Skid Row album.  When guest screamer Axl Rose trades screams with Bach during the cover of Aerosmith’s “Back in the Saddle,” he sounds like he’s been helplessly assimilated, stressing to keep up.  As usual, there’s polite thrash-metal, blues scales getting beaten to pulps, and Bach’s screaming – nothing new, a fish gotta swim thing.

This late entry was a stowaway on an Astralwerks care package that included the new Air Traffic LP, which doesn’t hit stores until February.  Untested new albums are scarcer than Nintendo Wiis this time of year, so I had three choices: review this, which is old news; review one of the 10 billion Compost releases that I’ve been ignoring for months now (I’m on Ultra’s promo list, so why pretend to be engrossed in unusable Euro-tech acts like Jazzanova?); or do a high-school-book-report-style snoozer on a best-of or live album, which is all that’s been coming out.

For once, luck shone.  By going with the most interesting-looking thing (pretty much anyone would give a band called Shocking Pinks at least fifteen seconds to make their case) I can now atone for the Bill Buckner I pulled last year by tossing Cold War Kids’ Robbers and Cowards on the Teensy Bit Too Late To Review stack instead of doing my job and writing it up months before every natural-born-hipster on earth started wearing Cold War Kids tee shirts.

Like Robbers and Cowards, Shocking Pinks is made of parts you’ve heard before, but taken as a whole it’s a jaw-dropper.  Nick Harte’s absinthe-drowned voice synchs perfectly with the music’s paisley drone, blurry shoegaze guitars and New Order-like rubber-band bass, but there’s a depth to all of it that can only be described anecdotally – for me, it was like hearing early Cure tunes for the first time; minimalism gone wild.  Very nice surprise here.
Outraged ranting, indie label release news and spaghetti sauce recipes are always welcome.  Email [email protected] 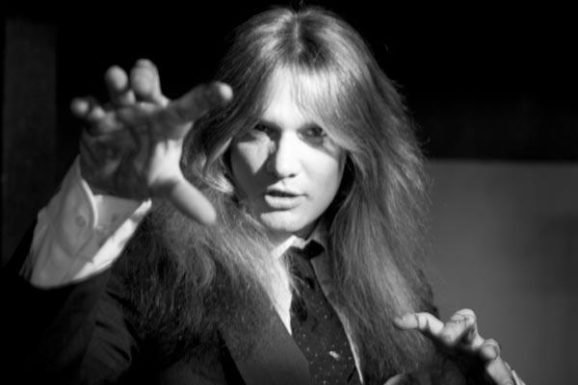