Following the release of their newest album Amen Corner, Railroad Earth took their west coast tour through Portland’s Crystal Ballroom on June 20th to ring in the summer solstice in style. In teaming up with Portland’s own prankster production team of Peak Experience, RRE decided to bring more than just their own special sound to the mix; they brought a horn section, a rocking guest guitarist in the form of Scott Law, a top notch opening act of Greensky Bluegrass, and more eye candy and costumes than most shows this side of Ringling Brothers.

Having heard the impressive Amen Corner prior to the show, I knew we were in for a serious musical treat.. The fact that RRE had teamed up with Peak Experience to celebrate the solstice, us Portland locals knew we had something real special to look forward to (and we were right).

Anyone who has seen some of the spectacles that Peak has been a part of, had to wonder how these local artists would team up with the Jersey boys and their musical style. It didn’t take us long to confirm the impending insanity, as we walked into the venue and were immediately greeted by folks dressed as satyrs, and all forms of horned and winged creatures from lore. There was a large manmade tree on the side of the dance floor, called the tree of dreams, adorned with iridescent streamers that acted as the ever growing leaves of the tree.  There were a multitude of plants and flowers all over the stage that were beautifully arranged, and served as a reminder of the solstice celebration at hand. While behind the stage there were multiple giant screens that displayed all sorts of visual enhancements throughout the night.

Greensky Bluegrass opened the night up quickly and powerfully. Their unique tweak to the traditional bluegrass sound was terrific and the audience seemed to really enjoy their originals. Their choices of classic covers were perfect, as they played Pink Floyd’s “Time” and Talking Heads’ “Road to Nowhere.” This gave the casual listener a measuring stick to gage their pleasure with Greensky, and the response was quite positive. Bringing RRE’s Tim Carbone to sit in a couple of tunes didn’t hurt, and it seemed to get us all primed for the show to come.

For the RRE purist, this was not the typical show, as there were a bevy of guest appearances, community jams, and Peak performers that pushed traditional RRE tunes in new directions. Yet for most in attendance the additional layers of all of the performers were much appreciated, and musically and visually inspiring. Scott Law reminded everyone as to why he is a local guitar icon. He added a rock and roll feel to many jams, and he shredded some classic RRE tunes, including the first set closer “Like a Buddha,” which may have been the musical highlight of the evening.

There were also a couple of choreographed parades during the music. One of which was a group of performers dressed in all white, carrying long poles with lit up stars dangling from the end, who then proceeded to move through the venue in unison. During RRE’s “The Butterfly and the Tree,” there were also stilt walkers with bubble machines and long iridescent streamers that added to the visual insanity.

The horn section of Joe Cunningham on alto saxophone and Patrick Finney on trombone also gave a thicker feel to the jams. They added a different dimension to both new tunes off  Amen Corner such as the fiery “Hard Livin” and “Waggin’ the Dog.” They also added their skill to some of the older tunes like “Elko” and the thematic encore of “Long Way to Go,” which also featured Greensky Bluegrass’s Paul Hoffman on mandolin and Anders Beck on Dobro respectively.

This night was all at once a celebration of the return of summer, the release of a wonderfully produced album Amen Corner, the collaboration of a variety of talented musicians from around the country, the teamwork of a community of artists who specialize in tantalizing a variety of senses, and the birthday of one of my best friends for nearly 20 years…Not a bad way to spend a Friday night if I do say so myself. 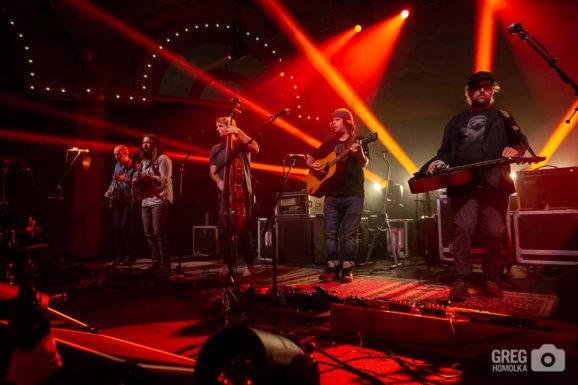