Anything Milwaukee in your name usually won’t get you very far in St. Louis these days.   The Cardinals are chasing the Brewers (and the Cubs), and once-proud Bud Light drinkers are depressed about the sale of Anheuser-Busch, so don’t come at them with your Miller Lite or High Life.  So really, who in St. Louis gives a crap about a band named What Made Milwaukee Famous, right?

Well, wrong. Maybe it was because the hot band from Austin was playing after one of St. Louis’ up-and-comings, Gentleman Auction House, which had earlier created a buzz in the room — I’m not sure — but what I witnessed was an attentive crowd having a grand time soaking up what WMMF supplied them, which was steady amount of energy, from rockers to mid-tempo beauties.

Opening with “Blood, Sweat & Fears,” which also leads off their superb new album, What Doesn’t Kill Us, lead singer Michael Kingcaid took charge with his strong vocals and drunken demeanor.  Perhaps egged on by drummer Jeremy Bruch, Kingcaid was playful with those that came out, often making jokes about Absinthe, which was being delivered to the band from a nearby bar.

I’m not sure if this is a common occurrence at WMMF shows, but the Absinthe was working.  While they consumed, WMMF continued to pound out danceable numbers like “Sultan” and “For the Birds,” and the crowd agreed with them, rocking to their lead.  At one point during “Cheap Wine,” Kingcaid looked like he had reached his peak, soaring during the chorus where he sang, “It makes me smiiiilllle.”

“That song rocked,” screamed one fan. Kingcaid grinned at her, drank some more Absinthe, and jammed into the night.  And when the final song of the night was about to end, there Kingcaid was, knees on the ground, shaking near his Orange amp, making any noise he could to end the set in style.

There would be no encore (it was well past midnight), but a valid point had already been made: Whatever did make Milwaukee famous didn’t matter to WMMF or the St. Louis concertgoers — great music won out on a night that didn’t want to end. 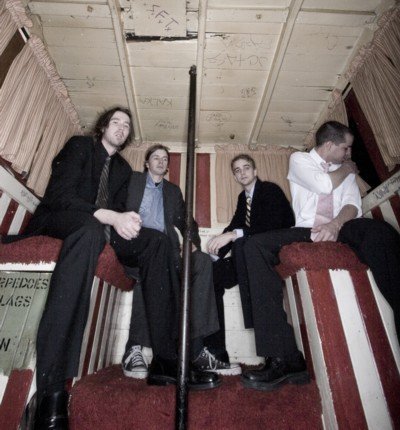