Dir En Grey, commonly referred to as Diru, is a Japanese metal band formed in 1997 out of the ashes of La:Sadies.  The band considers themselves to be prophets here to shed light upon “the feeling of hurt and sorrow caused by the weak, shallow egotism of humanity.” Guitarist Kaoru has stated that the band’s name was selected based upon comprisement of several languages, disallowing any specific meaning to be attached to it.

Their dark humor and fascinating live shows garnered them an early cult following, which attracted the attention of renowned X-Japan drummer Yoshiki Hayashi, who shares production credits on their major debut album.  They’ve been dubbed “the most successful metal act without English lyrics since Rammstein.”

The bands more notable appearances include headlining the legendary Budokan Theater and slots on the Rock Am Ring, Taste of Chaos, SXSW, Download Festival, Sonisphere and “Family Values” tours.  Their single, Saku, was a hit on Headbangers’ Ball.
Dir En Grey’s style has proven difficult to classify.  Over the years, Diru has abandoned their “post-visual kei” status in favor of a more gothic death metal slant and complex song structure.  They’ve been categorized as alternative, prog metal and hardcore at various stages of their career.

They currently have seven full-lengths out and are working on an eighth.

Dir en Grey is:  Kyo on vocals, Kaoru and Die on guitar, Toshiya on bass and Shinya on drums.

Diru live is not an experience to be missed.  This band pours their heart and soul into every set, always leaving you wanting more (literally – they refuse to do encores.)  I met their awesome manager, James, for the first time last year as he waved me inside to catch the show as I was slipping my adopted daughter, Justine, money so that she could purchase a meet and greet with her favorite band.

Everyone in their camp is an absolute pleasure to deal with, from James to their publicity agents, Charm School PR.
The band themselves are engaging, dark and mysterious.  They’re also seasoned professionals who deliver a powerful punch onstage, always more than overshadowing their studio efforts live.

Justine and I were also lucky enough to score a rare interview with the soft-spoken, yet fascinating Shinya.  His equally lovely translator, Nora, was on deck to help out with the language barrier. Many thanks to Rebecca Collazzo and Marisa Melendez for question collaboration.
—————————————————————————————————————

Deb:  Welcome back to New York!  I understand that you guys come pretty much every year, and I wanted to know what your favorite hangout is here in the city?

Shinya:  One thing’s for sure; we always go to Yoshinoya every year.

Deb:  What is your feeling about the intimacy of the club environment that you play in America versus the arena environment that you play back home?
Shinya:  In Japan, the production is always much bigger – not just the visuals, but also the lighting, everything is pre-planned.  We haven’t really been able to bring the whole production here to America, but we hope that one day, we’ll be able to do that in New York.
Deb:  Is it exciting to pull up a venue to an American venue and see so many fans lined up for days?Shinya:  I’m of course very surprised and happy by the fact that the kids are always lining up, but I worry that they might catch cold or something!

Justine:  My friends and I camp out for every Dir en Grey show; we stay warm and healthy – we’re just so excited that they’re here!Deb:  It’s sweet that you’re concerned.

Shinya:  Especially in New York, it’s always so cold!
Deb:  Yeah, even now; it’s summer, it should be a lot hotter.

Justine:  We have a joke that Dir en Grey brings the cold to New York (all laugh.)

Deb:   You’ve started playing some older material at your shows; how does it feel when you play it now as opposed to when you first wrote it?

Shinya:  We hadn’t played them in so long!  Now, playing them again, we’re finding new things to implement into the songs.

Deb:  A new way of looking at them (Shinya nods.)  You stated recently that you’re trying some new things next album, can we get a hint; what kind of new things?
Shinya:  It’ll definitely be different from the last album, Uroboros.  Right now, we’re only one third complete, so at this point, we ourselves don’t know what kind of album it will be!

Deb:  Oh, that’s exciting; so it could turn into anything at this point and you’ll be as surprised as we were!

Deb:  Do you think about fan reaction at all during the writing process, like “What are the fans going to think of this” or does that come later?

Shinya:  We don’t really think much about how people will perceive the songs just yet; we keep the emphasis on whatever we think is cool and that’s what comes out.

Deb:  Over the years, the band has gotten heavier; each album is a little more metal than the last.  Is this in response to the world around you or maybe more personal changes, just preference?

Shinya:  It’s not individual, but more that the band as a whole is moving in that direction.

Deb:  Do you have any particular influences right now – anybody that’s jazzing you guys, like “Oh, I want to write to that!”

Shinya:  I’m not really listening to a lot of newer music these days; more stuff that I’ve always listened to.

Shinya:  X-Japan…I went to their concert the other day.
Justine:  Yeah, they’re coming here next year.

Deb:  You should come in for that!  When you first started thinking about playing music, did you ever imagine that your songs would have such an impact on people’s lives?

Shinya:  Of course, there was always the possibility that we would one day be at a certain level, but we never thought that we would ever be the Dir en Grey that we are today!

Deb:  What is the most mind-blowing thing that a fan has ever said to you?

Shinya:  (thinking) Even if it’s bad, it’s okay?
Deb:  We hope it is bad, actually, that’d be interesting (all laugh.)

Deb:  Well, how about the best compliment that you’ve ever received from a peer then?

Shinya:  Someone said to me once that they’ve never seen anyone play drums as coolly as I do.

Deb:  That’s awesome – nice compliment.  Who is the most annoying out of all of the people that you travel with?  Someone you just wish you could leave at a truck stop?

Shinya:  We’re all annoying on the same level (all laugh.)

Deb:  That’s good, that’s helpful.   Well, thank you for your time and have a great set!

Megadeth Offer More Pulverizing Thrash On ‘The Sick, The Dying … And The Dead ‘ (ALBUM REVIEW) 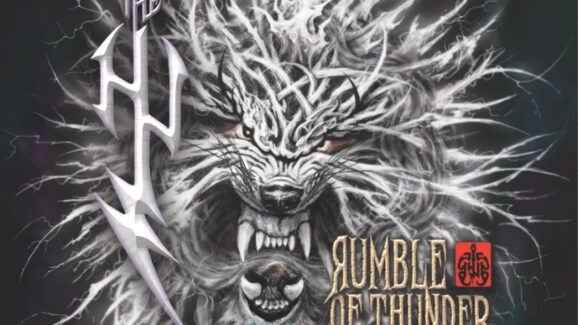 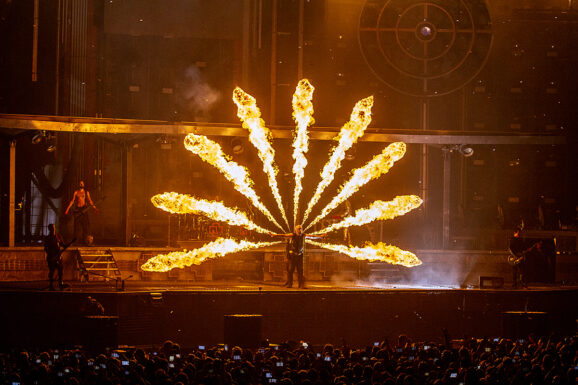 Rammstein Kicks Off U.S. Tour In Minneapolis With A Bang (PHOTOS)