Some nights it’s worth staying up late to catch the magic.  Coming off an extra long day and a longer than usual week, my buddy and I made the trek out to Carrboro to see Alejandro Escovedo, the always fabulous, eclectic, and debonair musical treasure, who is in the midst of a month-long cross-country tour that coincides with his 60th birthday.  Despite having seen Escovedo about a dozen times, including a stop in Raleigh just two months ago at a benefit for ailing singer-songwriter Chip Robinson, I simply can’t pass up an opportunity to see him live.  From solo acoustic shows to chamber pop orchestrations to full-blown rock assaults, Escovedo always entertains and brings a fresh approach to each of his tours.  This night brought forth the rock show as Escovedo was backed by “The Sensitive Boys”, a muscular trio that featured two long-time members: guitarist David Pulkingham and drummer Hector Munoz, along with bassist and fellow fashionista Bobby Daniel.

Wasting no time upping the amps and wattage, the band fired off “This Bed is Getting Crowded”, “Anchor”, and “Tender Heart”, three quick cuts from Escovedo’s latest release, Street Songs of Love, sending a charge of electricity through the modestly sized, mostly, middle-aged crowd.  Soon, heads were bobbing, feet were shuffling, and beer was flowing.  The frenetic pace continued as the band plowed through the set with reckless Crazy Horse abandon, evoking ragged guitar freakouts on the semi-autobiographical “Chelsea Hotel ‘78”, stepping to the edge of the stage and soloing during “Faith”, and squaring off in an epic guitar duel in the middle section of concert staple, “Everybody Loves Me”.  Escovedo has a genuine guitar god in Pulkingham, who at times is just as much the front man of the band, setting his deft guitar leads front and center in each song, complementing the lyrics, but also putting out a unique signature sound that bulks the soundscape into a force to be reckoned with.  Munoz’s drums and Daniel’s bass lock in the back row with a tight, pulsating rhythm section that stands out when needed, but also drives each song along with the proper groove and soul that the arrangements demand.  Alas, Escovedo has a band he could play stadiums with if we all existed within some parallel universe where rock and roll was king and still appreciated and revered by the masses.   Reality, however, bring benefits, as us fans can revel in this music, up close and personal amongst the confines of a sweaty rock club.

As long-time fans know, Escovedo, however, is not a one-trick pony.  Like kindred spirit, Neil Young, he can tone down the bombastic tempest and enrapture the audience with his brilliant songwriting and storytelling.  Back catalog classics like “Five Hearts Breaking” and “Rosalie” slowed the pace and brought a reverent hush over the crowd.  And as the name would suggest, “The Sensitive Boys” can follow suit, adding subtle accompaniment and elegant grace that match the introspection of Escovedo’s words and images.  The arrangements at this show stood on their own and came to life just as they do when Escovedo tours with his “Orchestra” and plays a more intimate setlist.

Finally, no Escovedo show is complete without the spoken introductions and narratives that bring scope and context to the messages being conveyed.  Some levity was brought out this night, as Escovedo acknowledged being served with divorce papers two nights earlier before taking the stage in Maryland.  Having elicited some sympathetic responses from the crowd, Escovedo carried on explaining that his soon-to-be Ex was the inspiration and co-writer on “Deer Head on the Wall”, the song he would next play so as to “bring some good karma to the messed-up situation”.  Later, Escovedo dedicated “Down in the Bowery” to his rebellious teenage son, Paris, who despite ridiculing his Dad’s songs as “old people music”, is showered with love, attention and guidance nevertheless.  This touching anecdote perfectly conveyed the message of Escovedo’s new record, Street Songs of Love.  As he himself pointed out, love can be found, discovered, and appreciated in all shapes and forms.  The songs on the album and many that he and the band are carrying to venues across the country reflect that concept and show that despite the whirlwind nature of life, time should be taken each day to reflect and appreciate on things you love and value.  Despite my initial weariness I left the Cat’s Cradle Thursday night feeling like a better person for having taken that time. 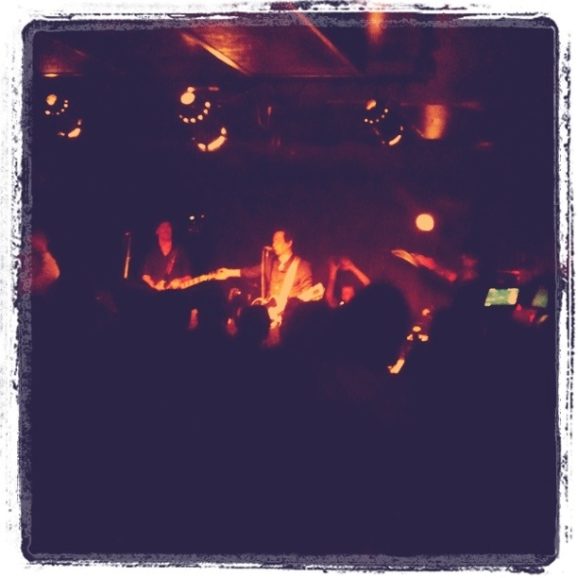