San Luis Obispo, CA, was in for a treat.

Small town residents tend to wrinkle their noses when talking about larger cities such as Los Angeles or San Francisco.  The horrendous traffic is reason alone for Central Coast residents to stay put.  However, the opinions on the large abyss that is Los Angeles may have shifted for the better after listening to The Belle Brigade at SLO Brewing Company on April 14th.

Matthew Wilder, a longtime friend of the siblings’ father, co-produced the album.

“We played with our close friends.  We’ve been friends forever and have always played on other records.  It is good to have professional friends and no strangers,” says Barbara, on the phone.  “Los Angeles is a community of people, and a place filled with variety.”

Being the grandchildren of television and film composer John Williams is yet another indication that musical talent runs through the siblings’ blood.  Fortunately, Barbara and Ethan are anything but the preconceived notions of the children of industry greats.  They are friendly, funny and attune with one another.  After our first conversation and casual dining experience prior to their set at SLO Brew, we connected quickly.  It was like swapping stories with old friends.

“Hi! We were supposed to have a beer tonight!” greets Barbara with a hug.

That personal welcome was the same warm voice that I heard on the phone two weeks prior.  At the time of our casual sit-down, The Belle Brigade was on tour supporting G Love & Special Sauce, and had already been on the road for a month.  They also had a successful run in Austin, TX for South by Southwest.

“We had eight or nine shows in Austin,” says Barbara.  “It was a zoo… I’ve been there before as a drummer with other bands.”

Barbara has played drums for artists such as Jenny Lewis and The Bird and The Bee’s Inara George before forming The Belle Brigade with younger brother, Ethan.  Ethan plays guitar and keyboard, and his sister joins him front and center with her guitar.  Fortunately she hasn’t ditched percussion completely, as she took a seat behind the drums for “Where Not to Look for Freedom.”  The crowd at SLO Brewing Company absolutely loved that.

“Everything is collaborative,” says Barbara about their songwriting process.  “We each have 50% equal say.”

Ethan agrees.  “We know each other well emotionally.  Barbara can write about the way I feel and vice versa.  We are relatives and friends.”

Their lyrics are based on personal experiences and basically the ups and downs of what any normal human being would experience.  Claiming that their subject material is “nothing unique,” the siblings simply sing about their feelings.

They are influenced by artists spread across different genres, and name Simon and Garfunkel, The Beatles and Stevie Wonder as musical inspirations.  One would call their album as folk-rock, infused with tight harmonies, catchy melodies and danceable rhythms.  When Barbara and Ethan sing, they sing as one tightly knit, well-executed, story-telling voice.  Being siblings as well as best friends give the other a solid shoulder to lean on.  At the end of their set, Barbara could not be happier introducing her younger brother to the appreciative crowd in San Luis Obispo.

Regardless of the size of venue, city or band, the talent that was spread to the small town that night was well received.  “We love you, San Luis Obispo!” yelled Ethan from onstage, before breaking into “Losers,” a track that has already garnered attention from music critics nationwide.  Unfortunately, their merchandise table was lacking their anticipated album at the time.  Fortunately, it was only a matter of days before fans could purchase their album.

And once that album drops, it will no doubt be played in cities far and wide, big and small.  It is more than just a debut; it is a refreshing look at the reemergence of great music. 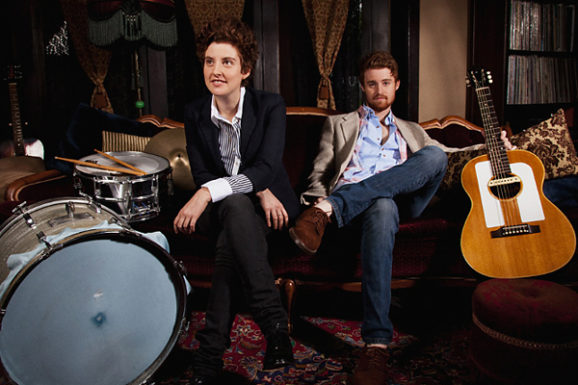