Robby Takac is loving the new stage lights that are multi-color flashing on a screen behind the drum kit. We are standing on the stage at Hard Rock a few hours before show time and Takac is totally psyched about what their fans will be experiencing tonight. “This is our third summer traveling,” The Dolls longtime bassist explains as we sit on a ramp backstage. “We figured if people have come to two shows they’ve seen almost the same show twice, so we decided it was a good idea to add some new songs and come up with some new gizmos, which is what you saw out there; make the show kind of exciting and change it up a little bit.”

And they definitely fulfilled their goal. With a changed up setlist and more sparkle, the Goo Goo Dolls put on a show full of energetic vigor and special treats for longtime fans. “We’re doing a few old, old, old songs from like 1993, which we haven’t done in years,” Takac shared, a mischievous smile taking over his face. “I love doing this. I still can’t believe I get paid for it.”

That vitality and love of performing certainly shows when they take the stage. Johnny Rzeznik chats with the crowd often, even playfully teasing an overly excited young fan: “She’s just the happiest girl in the world. Did you drop a little ecstasy before you came here? Cause you got that smile”. There was a lot of laughing going on, sometimes even in the middle of songs, and you could tell that these guys were still enjoying themselves. I asked Takac how they’ve stayed friends for so long: “I think we learned how to be around each other and we learned how to not be around each other, which is important. You can’t be in people’s face all the time … I have a pretty positive outlook on how that whole chemistry thing operates. I try to, anyway. It’s crazy. We’ve been playing together now for a quarter of a century”.

Coming into Biloxi from a shortened set due to rain in Memphis the night before, the guys are looking and feeling a bit on the tired side. “We’ve been out since April 2010, so it’s been a long, long, long tour”, Takac says. When I asked him if they would be going home and resting anytime soon, he shook his head. “I don’t know. Lately it seems it’s just what you do. It used to be it was all about putting out a record. You put out that record and if your record did well it was awesome. Then you’d go out and do a tour but it wasn’t like, you know, the end. It was just part of the component of how you were able to survive as a band. Now it’s different because everybody goes to YouTube to listen to music. They go to Pandora to listen to music. Everybody does … So this has become what you do. We’re bringing our show around.”

Michelle Branch opened with a wonderful set of old familiar songs sprinkled with a few new ones from a forthcoming long-awaited album due out in October. Her voice was clear and refreshing and she certainly exhibited a welcome stripped-down no frills singer-songwriter vibe. She rocked, she gently swept you away, she won over everyone, especially the young man in the audience whom she (jokingly) told could be her new drummer. Having taken some time off to be a mom and rejuvenate, she is back with a revitalized spirit. Rocking out on the new song “Spark” definitely gave a hint of what will be coming.

The Goo Goo Dolls had a tough act to follow but fell right into synch with their crowd, who were there to rock. “Last Hot Night In America”, “Slide”, “January Friend” and “Fallin’ Down” got things off on a positive note. Takac took over the vocals on several songs, doing his usual invigorated happy-to-be-here twist on “January Friend”, “Lucky Star” and “Now I Hear”. Keyboardist Korel Tunador took his turn on a highlighted keys solo on the title track of the latest CD, “Something For The Rest Of Us”, and some fine sax playing on “Broadway” and the closing “Give A Little Bit”. Mike Malinin never lost pace on the drums and extra guitarist Brad Fernquist had some fine moments as well.

A definite highlight of the night started with “Cuz You’re Gone/1000 Words”, a song that Rzeznik introduced as “One that about ten of you know,” from the 1993 album Superstar Car Wash. From there it was the lovely “Something For The Rest Of Us” with Rzeznik on acoustic guitar spotlighted in blue, and the insanely still-popular “Name”, whose guitar melody remains fresh and still very pretty after all these years. “So you guys know this one?” asked Rzeznik after playing just a few of the opening chords. Other highlights included a wonderful version of “Home”, a slightly different “Iris” and a peppy “Still Your Song” where a young fan handed Rzeznik a bouquet of red roses.

So what is the future looking like for this band that has been together for over twenty-five years? “Well, we’re recording songs as we speak,” Takac reveals. “I think we’ll probably record a bunch more songs in the next few months … I don’t know if we’re working on a record yet. I think we’re just recording songs. But like I said, the way things operate these days it looks like you just kind of got to be out there. So I don’t know if we’ll ever stop for a year and record a record again [that way].”

Which means more touring and getting things done as they move along the rock & roll highway. So does it feel like it’s been twenty-five years? “Some days”, laughs Takac. “Some days more than others. There’s been such distinct different phases of this thing. We spent ten years being an indie band that nobody cared about, drawing at best a few hundred people in places, barely selling records. And then we had ten years of having like a lot of huge songs and living in that record industry. And now we got the last three records that we’ve put out have been in a whole different music industry than what we were involved in in the past.”

“I think it’s good in a lot of ways,” Takac continues, talking about how fans have easier access to music via Facebook and YouTube. “I think people stay in touch with you, they feel in contact with you, they know you like they’re friends with you. So when you come through town they feel like they want to be there. So I think that really helps. It makes people listen to your music more cause it’s available, it’s on their phone, they don’t have to carry a separate device, all they need to do is sign onto Pandora and hit play and they can hear your songs.”

Closing out their time with the Biloxi fans with “Give A Little Bit”, the jolly old Supertramp song from the seventies, was a fun way to send them home happy. “It changes your life doing this, especially when you grow up doing it,” explains a happy Takac. “But I love just playing music. I love the energy that happens when you’re out there and there’s people watching and singing along. I think the minute you lose that, you’re done. And when you lose the appreciation of that, then you have no reason to be out there.” And tonight was proof positive that both the fans and the band loved being here. 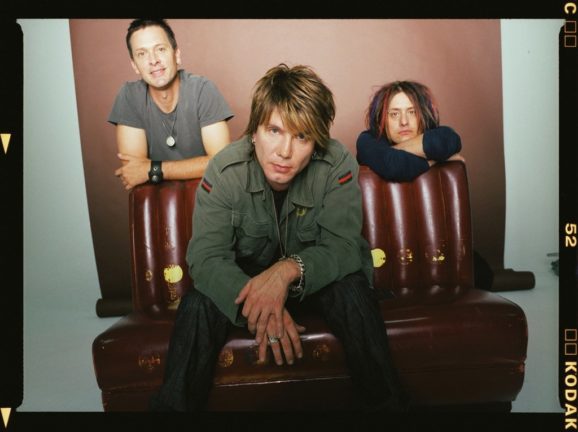