The Front Bottoms – The Front Bottoms (Bar/None Records)
Microwaving the Dead Milkmen for Generation Text pretty much on schedule, although this unplugged New Jersey guitar/drums punk duo have a darker edge, obsessed not with booger-fingered AIDS jokes but uber-emo concerns, from taking steroids in the hope of impressing a Snooki-like bimbo to the joyful fantasy of beating dad to death with a baseball bat.  From what I see, the quandary posed by these two fellers revolves around whether such a thing can be taken seriously, demanding a vague measure of artistic respect while hawking sounds right out of Presidents of the United States of America’s dweeby playbook, Brian Sella’s schoolyard-punchbag vocals evoking Weird Al and not Pavement.  Eh, you get it by now, skater-boi tongue-in-cheekiness without a whole lot of humor, an idea mounted on the broken-down deconstructionist vibe that’s common as bong hits at Bonnaroo.  Someone’s going to hit this shtick out of the park; may as well be these guys, sure.
Grade: B [Release Date: 9/6/11]

Arrica Rose & The … –  Let Alone Sea (pOprOck records)
This stuff is just a few DNA strands away from being something you’d picture your mom doing with her for-the-hell-of-it bar-band.  Said genetic sequences are comprised of faraway spaghetti guitars, a few puffs of synth, and a debatably desirable gift for Chris Isaak alcoholic-Americana.  “When The Clouds Hang This Low” is a dobro-dotted lullaby that winds down in a wintry synth-orchestral bum-out, but if one is really motivated enough to take her up on her publicity bullets, yes, “Summer’s Gonna Burn Me” does exhibit her nebulously professed fetish for throwback torch – like Peggy Lee after too many drinks with Tori Amos, the percussion held down by tom-toms, a phlegmatic “la-di-da” chorus making it a near-Siouxsie exercise.  Past that it’s scarily average chill-rock, a vehicle for addressing her quirky, overblown issues, whatever the hell they are.
Grade: C+ [Release Date: 8/22/11]

In One Wind – How Bright a Shadow (Primary Records)
Rooted mostly in twee-folk, these too-long-in-the-city Brooklynites erupt in occasional Boredoms no-wave (“Death By Sea Air”) and play to their inarguable strengths with dweeb-prog (opener “Tuck Me in with Bells”), all the while dabbling in the cracks in between and offering singing that should have stayed in the shower, save for a few Anthony Kiedis-like vocal deliveries from leader/guitarist Angelo Spagnolo.  It’s like Versus after listening to way too many Yes albums, as urban as a gallery full of unnecessary verist art, but that’s just me talking; some will hear Belle & Sebastian possessed by the Pixies, what the hell do I know.
Grade: B- [Release Date: 8/16/11]

Last Winter – The Heart & The Broken Compass (Six Degrees Records)
Last Winter have a lot of things not-going for them.  One, they’re from Florida.  Worse, they’re from Orlando.  And last, they’re trying to find safe haven for their unadventurous rawk in the plain-vanilla waters of the emo-rock Bermuda Triangle, hoping to survive the soulless vortex that’s swallowed so many Vans Tour wannabes that, come on, it’s fricking sad, man.  Straight-up stuff here, overly compressed guitars, government-issue vocals that’ll be mistaken for Taking Back Sunday as often as for Bowling For Soup.  Intro song “Copper Bones” whips out the melodic strength associated with Good Charlotte et al, and then comes “Nightlaunch,” a careless fail of filler native to bands that have one song to offer the world.  “The Northern Lights” fades out nicely on a spastic fractal, leading into chick-magnet sort-of-ballad “Neptune,” basically Avril Lavigne with (a certain amount of) testosterone.  Faint signs of life here, but almost nothing to differentiate this lot from any other pack of rich suburban yahoos who’ve ever shown up at a studio brandishing dad’s Amex.
Grade: B- [Release Date: 8/2/11]

Karmacoda – Eternal (Sola Musa Music)
This column offers safe haven for all trip-hop comers, even this debatable effort from the stubbornly DIY San Fran threesome.  Obviously the fetish is there, being that they kinda-sorta named the band after a Massive Attack tune, so points for fanboyism get chalked up from the get-go.  But the electronics are really thin, no bleeps or cavitation or even (despite the annoyingly omnipresent slow-breakbeats and the band’s professed interest in the genre) DnB attributes.  Drilling down, far from being trip-hop, “Into Each Life” is Mohegan Sun-getaway lounge patter in which Heather Pierce comes off like a Gen Y soccer mom doing a Justin Bieber chilldown.  Matter of fact, you know what a lot of this stuff reminds me of, right, is when Gwyneth Paltrow sang with Huey Lewis, and, gahh, kickoff song “If You Give It To Me” is like a toned-down version of Roxette’s “She’s Got the Look.”  I know, I’m being mean and rotten to this (nicely produced and actually quite pretty at times) album, but there’s a point to my bringing this up, that being a lesson in marketing for DIY bands without major label support.  See, pay attention for a second, this could actually be accepted in different circles, like if they dressed the chick in nothing but a few strategically placed pieces of torn cardboard and peddled it to the acid jazz contingent (cripes, I should offer this as a service and just take the money, my God WTF is wrong with me).
Grade: B- [Release Date: 8/2/11]

Steve Lipman – There’s A Song In My Heart (Locomotion Records)
What rapturous justice that this Sinatra-loving dentist (from Connecticut!) has released a terrible vanity album that I can torture with impunity!  Just like all of you people, I’m staring down the barrel of tens of thousands of dollars of dental work – do all those guys honestly think people have brand new Volkswagens growing wild in their gardens?  But anyway, I can dig that even dentists might have garage-band projects, and I don’t begrudge Lipman for sort-of attempting to become some sort of local-cable “Singing Dentist” or whatever this is as long as he never sings at me again, but gawd, the only 2 things worth a damn here are the song selection (“Come Fly With Me,” “The Lady Is a Tramp,” etc.) and his passable rendition of “Fly Me To the Moon” (at least I wasn’t contemplating mass murder while that one was playing).  Past that, Lipman has one tonal color, a dark gray crayon of Steve Lawrence, often off-key in the way of a kindly oaf. I must say furthermore that it’d be nice if dentists wouldn’t make vanity albums with their bloated bank accounts but instead take seriously the concept of “do no harm,” as in finding a way to lower their costs so people wouldn’t die, or even just making patients aware of Ora-MD (a natural oil mixture that actually does stop gum disease in its tracks and won’t poison you with fluoride).  Wait, wait, one last one, I can’t resist: would you let Harry Connick do your root canal?
Grade: D [Release Date: 7/19/11]

Mike Bloom – King of Circles (Little Record Company)
Though mostly a one-man operation run by this Julian Casablancas solo band associate, this project has a money trail leading to actor Tobey Maguire, who funded it up to the time it was picked up by this new record label from Pierre de Reeder, itself bankrolled in turn by de Reeder’s bass slot with LA child-star band Rilo Kiley.  Although that’s enough LA incestuousness to make me puke in my mouth a little, Bloom does seem to want to make some nice southern Americana, with arpeggios and finger-picking wisping around his airy and alienated Thom Yorke tenor on opener “Til It’s Over.” Essentially it walks a tightrope over the 2 opposing sides of Rhett Miller’s last album, not too bar-rock-hard and not too google-eyed-stagnant (even if “Afterthought To War” dawdles a bit before settling on a southern-gothic hook).  The songwriting is impressive, reaching deeper levels than you’d associate with your everyday LA hack, this despite “Devil’s Island,” an eye-rollingly contrived major-chord strummer that found a soundtrack home on The Roommate.
Grade: B+ [Release Date: 6/7/11]

Wyld Olde Souls – Ensoulment (My Generation Productions)
With Florence & The Machine making Grace Slick cool again, it’s important to pay attention to every bunch of second-hand hippy fashion plates that barge in.  Album opener “Ferris Wheel” dredges up every 60s acid-pop trick in the book, including an irresistible Spanky & Our Gang vocal round and phase-shifting the whole mix for maximum mushroom effect (they pull that again in the dirgey “The Dam,” immediately bringing Zep’s “Kashmir” to mind).  The Jerry Garcia-esque solo-flecked “Give It To You” wants to be a female Crosby Stills & Nash, and such-and-so, but if anything sticks out it’s these girls’ love of mellotron, the distinctive prehistoric keyboard that never fooled anyone into thinking it was a full orchestra but died trying – you get it, the Flower Power authenticity level is through the roof.  While all this is going on, they give a sideways nod to King Is Dead-era Decembrists with Celtic banger “Wyld Maiden.”
Grade: B+ [Release Date: 6/7/11]

Dida Pelled – Plays And Sings (Indie Europe Records)
My great hopes for this jazz-guitar record were negated, but that’s a preference thing, so don’t let that stop you if you’re into standards as examined by subdued, dreamy, barely-plugged guitar.  Dida Pelled studied at Thelma Yellin High School Of The Arts in Tel Aviv, the got-to school for jazz talent in Israel.  That boded well, and my ears were recently enchanted by jazz singer Yaali Ballin, who, like Pelled, is female and Israeli by birth – you get where I’m going, I’m sure, so I was a bit surprised how thuddingly average this stuff was.  Pelled’s core vocal sound is similar to Ballin’s but without the range; you’ve probably been disappointed yourself by all the cookie-cut Betty Boop-y backgrounders who’ve taken the Billie Holiday ball and headed for the end zone without a plan B.  Obviously you should be thinking of Wes Montgomery, whose “Fried Pies” receives a particularly grating Miles-wannabe trumpet solo out of nowhere, breaking up the until-then livable chill permeating the entire record, like having a drunken spastic suddenly burst into your yoga class.
Grade: C [Release Date: 6/7/11] 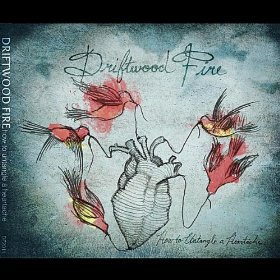 Driftwood Fire: How To Untangle a Heartache