Never underestimate the opening band. I’ve seen it way too many times – people show up late, linger in the lobby talking to friends or perusing the merchandise table all while the first band of the evening is pumping its heart out on a stage that in forty-five minutes will belong to the headliner. So I’m here to say = don’t linger, don’t dawdle, don’t blow off that band who is out there to build YOU up and get you ready for the main band. They’re not out there to be background noise to your waiting.

So when Night Ranger fired their cannons and opened up the rock & rolling in New Orleans, they were energetic flamethrowers who played their ever-loving hearts out, as they always do.  Their energy is so vivacious and fun, it’s like being at a very cool beach party where the band is running around amidst the crowd incorporating you into their sing-a-longs instead of actually staying put on their stage.  “Our mentality is to go out and actually show people that we are having fun,” guitarist Joel Hoekstra told me a few days after this show.

Playing approximately nine tunes, Night Ranger had them dancing in the aisles from the word GO. “Lay It On Me” started things off with a kick and by the time they finished up with “(You Can Still) Rock In America”, they were stiil rocking harder than ever. Drummer Kelly Keagy came out from behind his drum set, which was set up to the side next to guitarist Brad Gillis, to sing “Sister Christian”, a fan favorite, and vocalist Jack Blades decided to add in the Damn Yankees classic “High Enough” after talking with the Nuge a few nights before.

Highlight of the set was “Don’t Tell Me You Love Me”, featuring steaming hot guitars from both Hoekstra and Gillis and a verse thrown in from “Hotel California” mid-song. “That was an Eagles song,” joked Blades after having the crowd help them sing. “That was the whole city of New Orleans singing”, he exclaimed happily.

Foreigner was also more than ready when vocalist Kelly Hansen sprinted out onto the stage singing “Double Vision”. This band has come a long way and the additions of both Hansen and bass player Jeff Pilson have given this monster of a seventies band fresh new life in the current decade. With a voice close to Lou Gramm’s and moves more like the sinewy Steven Tyler, their sound is actually a little more bolder around the edges; perhaps the influence of both Hansen’s and Pilson’s former hard rock/metal roots. But whatever it is, the vitality is there and the music just soars.

So how could anyone not enjoy this set: “Head Games”, “Cold As Ice”, “Dirty White Boy”, “Urgent”, “Hot-Blooded”, “Juke Box Hero” and “I Want To Know What Is”, the latter featuring the high school choir from local SSA. There was no song to cause you to leave your spot for any reason. “Do you hear that beat? Do you feel that groove?” asked Hansen at one point.

With Mick Jones MIA due to illness, Night Ranger’s Hoekstra came aboard and absolutely took over with blistering riffs and on “Juke Box Hero.” His rapport with the band was apparent and he played well with his new playmates, especially Pilson. Hansen, not to be overshadowed, went into the audience several times, causing fans to explode with excitement. Introducing “I Want To Know What Love Is”, he called out for everyone to “put your arm around the person close to you … make a new friend, meet a new ex-wife”; and on a more serious note, honored America and 9-11 victims and families by pledging, “We’re here for you and we recognize”.

And then came Journey. With the opening power chords of “Separate Ways”, the arena started rocking and it was on. Arnel Pineda, a spitfire of a vocalist, jumped and pumped his way out to the end of the catwalk and made friends with every fan, including those way up in the nosebleed seats. His vocal presence is three times his physical size and he sucked you in from moment one. Playing such classic hits as “Faithfully”, “Lights” and of course “Don’t Stop Believin”, is it any wonder this band is still as popular today as it was in the 70’s and 80’s. Neal Schon still plays a mean guitar. Ross Valory stands up straight, looking almost like a gentleman, evoking his predecessors of stillness John Entwistle and Bill Wyman. Jonathan Cain on keyboards and Deen Castronovo slamming on the drums all came together to boil at the right temperature. And Pineda certainly won over New Orleans by coming out later in a Drew Brees Saints jersey.

Journey is not just out there promoting old songs via a new voice. They have a new CD out called Eclipse which sounds like the Journey everyone knows and loves but carries a harder-edge punch. They played two new songs, “City Of Hope” and “Edge Of The Moment”, which teased the crowd that this band is moving forward in the right direction and not standing still.

I asked Hoekstra about being on tour with these legendary bands: “Well, it’s great on many levels. Number one, we feel it offers people a night of hits that they can sing along to. And for me on a personal level, it’s just wonderful cause I get to be around such experienced musicians, many of whom are heroes of mine that I literally studied growing up as a musician … It’s really great, there’s a lot of camaraderie, the bands are all very friendly with each other. I think at this stage of the game we’re not fighting each other, just totally embracing each other and having a wonderful time, showing everybody that rock & roll is alive and well.”

What a perfect way to describe what happened on this Saturday night in the city by the Gulf.

Below, I have included a few more excerpts from my interview with Hoekstra. He will also be featured in an upcoming installment of my column MY ROOTS, so watch for that coming soon.
Tell me how you came to be in Night Ranger.

I was in a house band for a guy named Jim Peterik, who most people know from the band Survivor. He’s written a lot of hit songs for a lot of artists. He co-wrote with .38 Special and Sammy Hagar. He also was in The Ides Of March. So he has these events pretty much like once a year called World Stage in the Chicago area. He has a house band and all his artist friends will come out and sing a couple of songs. So Kelly Keagy, Night Ranger’s drummer, would come out and sing the Night Ranger hits. I would see him once a year at that and he always thought, “Man, Joel plays the Night Ranger stuff pretty well”. As it turned out, one year he came in and said they were working with an interim guitarist and I said, “Well, I’d love to get a shot” and he ended up calling me a week later saying the guy they were working with needed to miss a show. He said, “We can’t rehearse. We either need to cancel the show or just have you learn all the stuff and come in”. So I learned twenty-five songs, I think, in about eight or nine days. Flew up to Michigan and played this show with them and it was really fun. It was like jumping out of a plane and not knowing if you had a parachute or not. And when the parachute opened, it was an awesome feeling (laughs). It was one of the greatest moments I’ve ever had in my life.

(laughs) Yes, exactly. The rest kind of worked itself out. As soon as I did that, I think we just looked at each other and went, “Man, that was really cool” (laughs) That worked out really well, for not having a chance to even rehearse or anything. So I started up full time in January of 2008.

What do you think is the secret ingredient that keeps Night Ranger going after all these years?

I think number one has got to be a true love for music, because I don’t think that at this point in time anybody is doing it necessarily to make a living. I think that they’re very passionate about what they do. So the love for music and I think actually how much they enjoy doing it. It’s not just doing it out of necessity, I guess … I mean, at the end of the day that’s the way I think everybody on the whole tour looks at things. I don’t think anybody’s trying to prove they’re something they’re not. I think we’re all just having a great time playing rock and the tour has done so well that we can’t wipe the smiles off our faces.

Night Ranger has a new CD out called Somewhere In California. It’s a fun CD with the carefreeness of “Growin’ Up In California” to some other actual harder rocking songs.

I mean, I grew up playing Night Ranger’s music so I’m not really that far removed (laughs) from sounding like a good fit with them. So I really don’t have to edit myself very much in those regards. So yeah, we had a really good time. It was really neat the way we wrote. Kelly, Brad and Jack got in a room together and put together most of the material and then towards the end they called in Eric Levy, the keyboard player, and myself and we ended up writing a couple songs as a total band. Like we just came up with a couple of things and said, “Hey man, we all just wrote a song together, let’s do this”. So it was really neat and really fun and really kind of organic. We sat in Jack’s live room with amps cranked up loud.
Well, the album is great and I remember Night Ranger in the eighties and you’re still out there doing it and doing it well.

For me, being on Somewhere In California just makes me really happy to be like a small part of their recording history and it’s all an honor for me and like I said, we’re blown away by the outpouring of love we’re getting on this. We didn’t really see it coming. We just kind of thought, let’s make an album and have some fun and as it turns out people are saying it’s the best album that the band has made in thirty years and so be it. It’s great and we’re very happy about that. 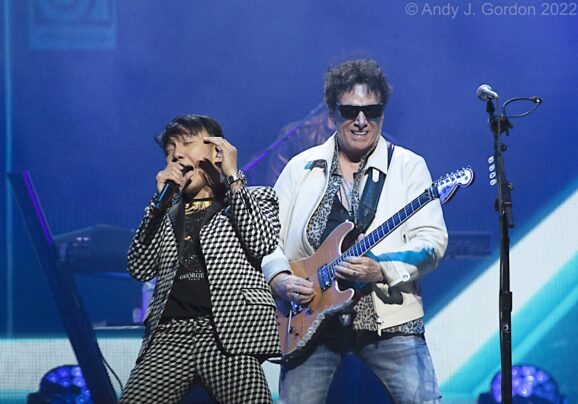