Swedish post-punk export The Sounds have a lengthy track record of crafting high-energy music with attitude and an 80’s dance-pop feel. If nothing else, the band’s sold-out concert at the Black Cat in Washington, D.C. on November 5th showcased their ability to bring that sound to a live setting and figuratively burn the venue to the ground. Feeding off of the shouts and applause of an invigorated audience while charging up their live sound with their hard-hitting beats, synthesized riffs and emotional vocals, The Sounds dug deep into their decade-long repertoire to give the crowd a spirited and memorable performance.

Though the band is currently touring in support of their newest record, Something to Die For, they’re clearly prioritizing their fervent fan-base in their setlist selections. New material comprised only one-third of the show at the Black Cat as vocalist Maja Ivarsson and company traversed from album to album, playing all of The Sounds’ most intense and beloved songs over the course of the night. Whether or not this is the band’s response to somewhat chilly critical reviews of Something to Die For, their partiality toward the fan favorites drew excitement from band members and galvanized an audience full of anticipation.

They took the stage to Something to Die For opener “It’s So Easy” and then kicked off the show with the album’s third single, “Dance with the Devil.” This track served as an anthem for the entire concert, as song after song Ivarsson and company dramatically danced around stage, bouncing from side to side and relentlessly encouraging everyone in the crowded room to do the same. Singles like “Queen of Apology” and “Painted By Numbers” accompanied classic tracks like “Rock and Roll” and “Hit Me,” and in spite of a setlist that has become fairly standardized and unchanging on their current North American tour, The Sounds gave an overall passionate and crisp performance.

Ivarsson’s visibly heavy emotional interpretations and electric connection with fans at the Black Cat transformed the show from a musical performance to a personal experience, making this a particularly special night to see the band live. After nearly crying at one point during the first part of the set, Ivarsson thanked the crowd for their love and support and proclaimed, “I love this city” several more times throughout the remainder of concert. As the show progressed, her antics and interaction with the audience and her bandmates became increasingly animated. The singer smoked cigarettes during songs like “Better Off Dead,” endearingly exhorted her “ bitches” (the fans) to sing along more loudly to beat New York City (the band’s previous stop) from atop a guitar amplifier, and even sprayed beer into the audience during an encore featuring “Tony the Beat,” and “Hope You’re Happy Now.”

More than anything, The Sounds’ sold-out performance at the Black Cat was about energy. In a set tailored for the fans, the buzz and excitement in the audience grew as the band took in the electric atmosphere and played a forceful yet touching concert. The Sounds truly adore their fanbase, love the music they play and insist on having fun. Along with the dedication The Sounds have for their live performance, the combination of these factors undoubtedly left hundreds of D.C.-area fans with vivid memories of a show they won’t soon forget. 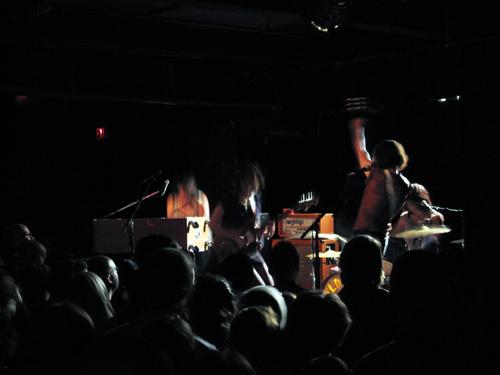