Thanksgiving is certainly one of the most family friendly holidays and Robert Randolph & The Family Band made the days surrounding it an extended family throw down.  The group decided to host a residency from Tuesday until Saturday, taking Thursday off for the obvious turkey obligations.  On Friday night the venue was approximately half to three quarters full for the band’s third show at this fantastic location.  Brooklyn Bowl may have pins on strings, but that is the only downside to this great space, and most concert goers won’t even roll any rock (which is a shame) as they are entranced by the great acts, food, drinks and sounds that emanate from the venue.

RR&TFB took its time getting things going on this night, perhaps still tryptophan filled and sluggish, they didn’t take to the stage until 9:15 (after doors at 6 and show at 8 announcement) but when they did arrive,  they got right down to business.  The six piece had two ‘normal’ guitarists (Bret Haas and Cousin Ray-Ray) and keyboardist/violinist Jason Crosby augmenting the core of the band; Danyel Morgan on bass, birthday boy Marcus Randolph on Drums, and Robert playing his now famous peddle steel.

Unlike some recent efforts, tonight’s show played to the group’s main strengths; its down home vibe, its ongoing songs, and its group playing mixed with virtuoso musicianship.  The band didn’t get bogged down trying to play three minute pop songs or misplaced ideas of what a “rock star” should be; they were just themselves and they put on a better show for it.

Dressed to the nines the guys began with a riffing and thumping instrumental that pushed ten minutes and had sweat dripping off their brows as they engaged in circular solos to get each member warmed up. The band then dug out the Unclassified track, “Why Should I Feel Lonely” which had the crowd yelling “Tell Me Why!” at the top of their lungs.  Some sound issues seemed to be plaguing the band with Randolph pointing to his in-ear monitor constantly while crewman rushed onstage; nothing could be detected in the crowd, but it was distracting to watch.

The band floated around with a low-end centric instrumental that showed off Marcus via a drum solo before the bass talents of Morgan made the tune reminiscent of a Primus jam.  Robert then welcomed vocalist (and sister) Lenesha Randolph to the stage.  A gorgeously rollicking cover of a song from another great musical family, The Staple Singers “I’ll Take You There” was toyed with and explored inside and out, highlighting the first set.

The band twisted its family hoedown vibe into extended jam cuts with pieces of covers (Doobie Brothers “Black Water”) slapped on the BBQ to add flavor to the ongoing meal.  A quick guest appearance by Lettuce guitar player (and fellow Knicks fan) Adam Smirnoff began a set closing duel that had Robert standing on top of his pedal steel, quite a site and sound.  The second set was exactly more of the same with chicken scratch riffs blending with thumping bass runs and falsetto yells from Morgan.  The group was interlocking and flowing with ease, covering “Papa Was a Rolling Stone” with passion as the phrase “funk & lightning” comes to mind when that number is pumping.

Easily the most interesting song of the night was “Good To See Ya” during which the group brought audience members on stage to join them playing guitar for a few stanzas.  The band allowed the audience members to live out some fantasies and in all fairness the party vibe was enhanced, but the song never suffered.  Crosby got his violin going adding an extra southern vibe into a band that already has a knack for sounding like a funkier Allman Brothers, but then again the flashes of Michael Jackson’s “Wanna Be Starting Something” signaled the group is its own family. 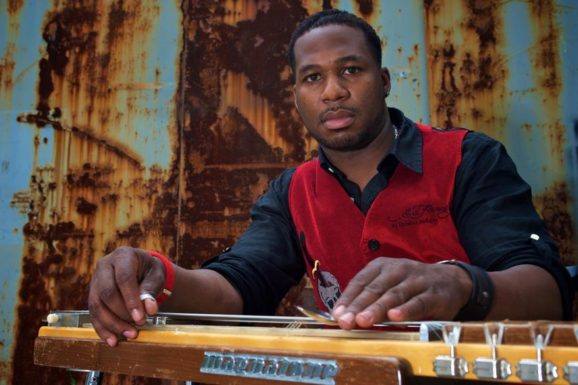