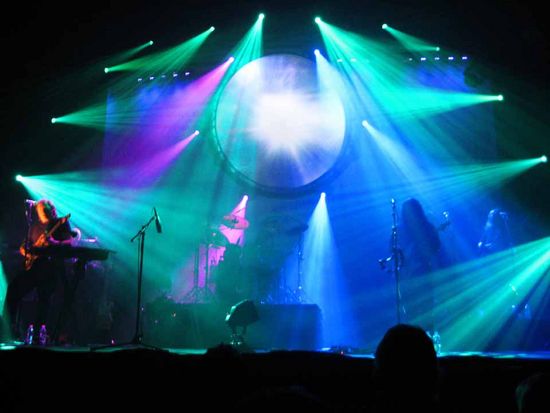 The Pink Floyd Experience, a highly skilled veteran sextet from San Diego, is the most perfect kind of tribute band imaginable. Taking the stage late in the evening in Knoxville’s grand, cathedral-like Tennessee Theatre, there was—thankfully—an absence of look-alike wardrobes, distracting make-up, and dated retro swagger. Instead, the band (which originally formed back in 1994, the year of Pink Floyd’s full-length swan song, The Division Bell), focused intently on recreating the heady, heavy majesty of psychedelic rock’s most powerful act—with a series of note-perfect performances that kept every glistening guitar solo and organ vamp tightly in-tact, much to the delight of the venue’s highly appreciative (and largely intoxicated) audience.

Which isn’t to say they didn’t take the opportunity to branch out when the moment arose—in fact, the band’s unique line-up allowed for some subtle shake-ups. Guitarist-vocalists Tom Quinn and Zachary Throne managed to nail the studio nuances of David Gilmour’s layered, harmonized leads, trading off melodic patterns and mammoth riffs at ease, even adding their own colorful touches on occasion. And jack-of-all-trades Jesse Molloy consistently stole the show, even when he wasn’t throwing down jaw-dropping sax solos on highlights like classic rock staple (and fan favorite) "Money" and "Shine On You Crazy Diamond." He also turned out a funky-ass clavinet romp on "Have a Cigar" and (hilariously) contributed a sweeping, air siren-like backing vocal wallop to early Floyd classic "Astronomy Domine."

Though one could sense the crowd positively aching for the band’s classic rock staples, PFE were quite eclectic in their setlist, moving from early epics like "Set the Controls for the Heart of the Sun" to later day, Gilmour-led anthems like "Learning to Fly." Though the show’s second half was a delightfully schizophrenic romp through Floyd’s wide-ranging history, the sextet outdid themselves pre-intermission with their full-album rendition of Wish You Were Here. With "Shine On You Crazy Diamond" flowing through its endlessly psychedelic stream, it might as well have been 1975 in Tennessee.

About the author: Ryan Reed