The founding members of The Beach Boys, one of the world’s most legendary bands in popular music history, have reunited for a global 50th Anniversary celebration, including a new album release, a major international tour, and commemorative catalog releases. Today, The Beach Boys announce details about their new studio album, That’s Why God Made The Radio, to be released June 5 by Capitol/EMI.

The album’s lead single, “That’s Why God Made The Radio,” showcases The Beach Boys’ soaring harmonies in an upbeat, beaming ode to music’s radio champions around the world. Beginning today, the song is available for download purchase from all major digital service providers, and it makes its national radio premiere today on “Mike & Mike In the Morning” on ESPN Radio and ESPN 2 (6 AM-10 AM ET/PT, check local stations). A new lyrics video for the single has been launched today on VEVO and The Beach Boys’ YouTube channel, where a video about the making of the song is also available for streaming.

“I got a lot of my appreciation for all of the creativity in the world, in terms of music, through the radio,” says Mike Love. “For all of us who grew up in the ‘50s, ‘60s, ‘70s and beyond, the radio has played such a huge, important part in our lives. When we were kids, we’d sneak out of the house and go and sit in Brian’s car and listen to the local radio stations on his car radio.”

The album’s other new songs include “Think About The Days,” “Isn’t It Time,” “Spring Vacation,” “Private Life Of Bill And Sue,” “Shelter,” “Daybreak Over The Ocean,” “Beaches In Mind,” “Strange World,” “My Life Suite,” and “Summer’s Gone.”

The Beach Boys’ collaborative approach to writing and recording their new music is evidenced throughout the album, with all of the band members participating to create its glorious harmonies, lyrics, and arrangements.

“We’ve come full circle,” says Al Jardine. “Sharing our memories and our present in the studio has been really remarkable. I can especially feel it when we’re all singing around the mic together, because we all hear each other and we really lock in.”

“We have reunited as a band, but we never ‘un-reunited’ as friends,” says Bruce Johnston. “To be back in the studio with these guys is like a prayer that’s been answered and I am thrilled to be sharing it with everybody.”

“This is more like a family reunion than anything,” says David Marks. “When we’re together, we get along great. The chemistry always works the same as the last time we were together, and the five of us become a single element.”

The Beach Boys’ 50th Anniversary tour, the band’s first major outing to include Brian Wilson in more than two decades, began this week in Tucson, with other North American stops including their first concert at the Hollywood Bowl since 1965, headlining performances at the New Orleans Jazz & Heritage Festival (“Jazz Fest”) and Bonnaroo Music and Arts Festival, and concerts in major cities including New York, Chicago, Boston, Philadelphia, Atlanta, Las Vegas, Washington, DC, Toronto, and Montreal.

Starting May 1, a custom 72-page Beach Boys ‘ZinePak magazine, bundled with an exclusive CD featuring 11 of the band’s classic hits and their 2012 version of “Do It Again,” will be available for purchase in the music department at Walmart stores nationwide. For more information and to purchase the ‘ZinePak online, visit the Walmart site.

The Beach Boys are scheduled to head to QVC Wednesday, May 16 to unveil their much-anticipated new release with a special hour-long live performance at 7 PM ET / 4 PM PT. During The Beach Boys’ QSessions Live broadcast, fans will have the opportunity to order the new album, which has been specially packaged just for QVC shoppers with a greatest hits bonus CD, nearly a month before the new album’s release date. The QVC-exclusive album package with bonus CD will be available starting May 16 at QVC.com or (800) 345-1515, while supplies last.

The Beach Boys have confirmed several other national television appearances, including an interview on “CBS Sunday Morning” to air this Sunday, April 29, a multi-song performance and interview on NBC’s “Late Night With Jimmy Fallon” on May 7, a performance on NBC’s “Tonight Show With Jay Leno” on June 6, and more to be announced.

The Beach Boys and Capitol/EMI have also partnered for 50th Anniversary commemorative releases celebrating the band’s entire catalog, with a new hits collection and a career-spanning box set planned for later this year.

About The Beach Boys

For five decades, America’s first pop band to reach the 50 year milestone has recorded and performed the music that has become the world’s favorite soundtrack to summer. Founded in Hawthorne, California in 1961, The Beach Boys were originally comprised of the three teenaged Wilson brothers: Brian, Carl and Dennis, their cousin Mike Love, and school friend Al Jardine. In 1962, neighbor David Marks joined the group for their first wave of hits with Capitol Records, leaving in late 1963, and in 1965, Bruce Johnston joined the band when Brian Wilson retired from touring to focus on writing and producing for the group.

The Beach Boys signed with Capitol Records in July 1962 and released their first album, Surfin’ Safari, that same year. The album spent 37 weeks on the Billboard chart, launching the young group known for its shimmering vocal harmonies and relaxed California style into international stardom. The Wilson/Love collaboration resulted in many huge international chart hits, and under Brian Wilson’s musical leadership, the band’s initial surf-rock focus was soon broadened to include other themes, making The Beach Boys America’s preeminent band of the 1960s.

In 1966, The Beach Boys were one of the first bands to found its own record label with the launch of Brother Records, Inc. (BRI), with the band’s members as its shareholders and Capitol Records as its distribution partner. BRI continues to manage The Beach Boys’ intellectual property, including the band’s catalog with Capitol/EMI and other label partners, as well as its name, logos, image and likeness.

The Beach Boys continue to hold Billboard / Nielsen SoundScan’s record as the top-selling American band for albums and singles, and they are also the American group with the most Billboard Top 40 chart hits (36). ‘Sounds Of Summer: The Very Best Of The Beach Boys’ has achieved triple-Platinum sales status, and ‘The SMiLE Sessions,’ released to worldwide critical acclaim in November, has been heralded as 2011’s #1 Reissue of the Year by Rolling Stone magazine.

Inducted into the Rock and Roll Hall of Fame in 1988 and recipients of The Recording Academy’s Lifetime Achievement GRAMMY Award, The Beach Boys are an American institution that is iconic around the world. 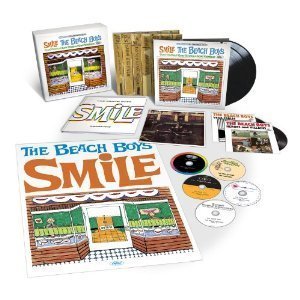