Bubbling up from the tar balls that washed ashore following the BP Gulf oil spill in 2010, DeLuna Fest was born, surely as a response to fading tourism in the region. Now in its third year, the festival promises good times on a pristine white sand beach. Where else can you have your feet in the ocean whilst enjoying a rock show? Needless to say, flip flops and swimwear are pretty much mandatory attire for the weekend. How many places can boast such a fantastic setup?

The main stage easily filled the audience area with sound, even carrying well down the beach for hundreds of yards. Gates opened at 2pm on Friday, but lucky beach-goers and nearby hotel guests were even treated to an 11:30 am Pearl Jam soundcheck. The band’s mid-morning cover of The Clash’s “Know Your Rights” was a little bit of unexpected fun.

Opening the festival on the 2nd stage was Pioneers! O Pioneers!, a 4-piece local Pensacola band. Their sound is reminiscent of Explosions in the Sky, mixed with El Ten Eleven, but with vocals added to the mix. Michael Bishop helms the band on guitar and vocals, but bassist Ric Hohn added a wonderful harmony part to song "Former Faces." Other standout performances include “August Pt. II”, with some melodic fret tapping by Bishop. Also “This Town is a Ghost Town Pt. II” with the hopeful refrain of “This town’s not dead yet” resonated with the audience. And if this band is any indication, we can’t help but agree.

City and Colour is the moniker under which Canadian singer-songwriter Dallas Green performs and records under. Dallas=City. Green=Colour. Get it? The band was a little late beginning their set and the natives were getting restless. During an instrumental break in the opening number, Green introduced the newest member of his band…..”the camera guy!” apparently referring to the intrusion of the handheld video guy planting himself squarely in the middle of the band. Green laughed it off and the crowd was eager to laugh along. His voice was great, showcased nicely during catchy indie folk rocker “Sleeping Sickness” and the country-tinged but soulful “Grand Optimist”.

The Gaslight Anthem, who hail from New Brunswick, NJ, took the main stage as Fugazi’s “Waiting Room” played through the PA. The band donned their instruments and proceeded to interrupt the song just as Ian MacKaye belts “…I’m in the waiting room!” This clever little show-opening was a fitting way to prepare the crowd for the night that lay ahead. Some call these guys punk, but that’s not quite accurate. They’re certainly punk-influenced, but really these guys have evolved into a straight-forward, honest rock band. And they carry the blue-collar baton passed by the likes of Bruce Springsteen quite nicely. To further prove their working-man street cred, lead man Brian Fallon talked about the fact that as a musician “…you can’t phone it in”. With that segue, he brought out Eddie Vedder to join in on the Pearl Jam fan-favorite “State of Love and Trust”. It was a very faithful live cover and the band wears this particular song. They’re a tight outfit and, with the way Eddie fit right in, you could tell that this band has played that song more than a few times. After thanking their guest, they finished out their set with the single “45,” a cover of The Animals “House of the Rising Son” and a crowd-pleasing “Great Expectations” finale.

Later on, Ben Folds Five took to the 2nd stage. The reunion seems to be holding strong, as the trio sounded as tight as ever. Folds was in fine form, getting several songs into the set before realizing that he could actually sit at his piano. Shortly after they dove into their enormous hit “Brick” to begin their third act, Trampled by Turtles could be seen on the smaller stage across the way. Apparently, bluegrass is alive and well, as they drew a rather large crowd to this little piece of the DeLuna site. The audience was especially ecstatic to hear them begin after a delay due to some issues with the stage monitors. Five musicians + 5 different instruments + 5 mics + 5 monitor mixes often are the type of headache for the audio team that can derail an event like DeLuna, but once the technical difficulties were solved, a foot stompin’ time was had by all.

Day one’s headlining act was, of course, Pearl Jam. Many festival-goers had come to this beautiful beach just to see their favorite band play and they were not disappointed. Earlier in the day, we watched as a number of people ran directly to the main stage barricade as soon as the festival gates were opened. That’s over 7 hours prior to the headliner’s act. In any setting, this is dedication, but in the Florida sun it is a potentially dangerous undertaking. Of course, by the time 9:30pm rolled around the beach was packed to the gills and the crowd was frothing.

The stage went black and the band came on stage to an enthusiastic roar. Starting the show with the rare-ish “Oceans,” off of their classic debut album Ten was the perfect way to kick things off, considering the festival’s surroundings. After that, they ripped right into a bit of Pink Floyd’s “Interstellar Overdrive,” which always leads into the tour staple “Corduroy”. As PJ are winding down their celebration of 20 years of making music together, we were treated to no fewer than seven tunes from Ten, as well well as several cuts from other earlier albums. Between songs, Mr. Vedder often spoke to the crowd, quipping “I don’t know when Pensacola got so fucking beautiful” and “It’s not often you get to play right next to the ocean”. He also brought up Florida’s voter ID woes as he warned attendees “This is a Public Service Announcement….don’t lose your ID’s when you take off your clothes and go swimming in the ocean….no matter how you wanna vote, make sure you vote”.

Of course, Vedder was not here to educate, and the whole band was happy to stay on task of providing a fantastic headlining set for the audience. Lead guitarist Mike McCready, especially, was in rare form– must have been the home field advantage as he was born in Pensacola (which was news to Vedder, as he informed the crowd). The 2-hour-plus, 2 encore set was capped off with The Who classic “Baba O’Riley” and “Yellow Ledbetter” which McCready transitioned into an amazing version of “The Star-Spangled Banner” as someone waved an American flag in the front of the crowd. Jimi would have been proud. The fans certainly were. 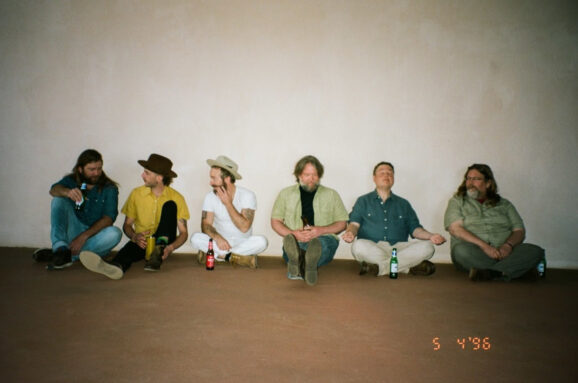 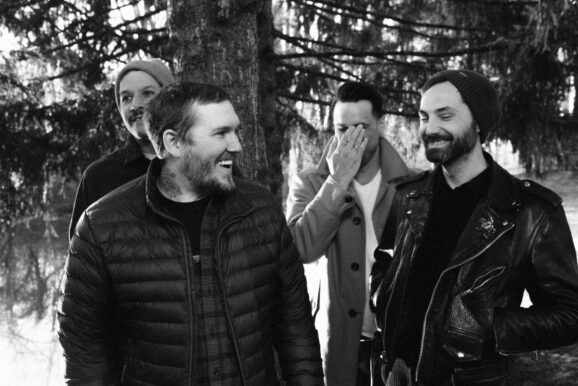 The Gaslight Anthem Kick Off U.S. Tour with Triumphant Portland, OR (SHOW REVIEW) 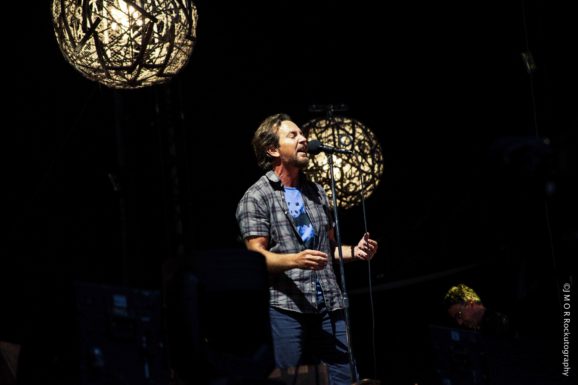