The meat of the The Lone Bellow’s impressive self titled debut album is country but it is dipped in soul, sprinkled with soaring, three part harmonies and served with a big side of rock and roll.   The LB’s sold out show at the Brighton Music Hall, Saturday night drew largely from the songs on the record.

The Lone Bellow consists of Zach Williams (vocals, guitar) who was center stage in jeans and a sport-coat, to his left was Brian Elmquist (vocals, acoustic guitar) in jeans, t-shirt and vest.  To their right was Kanene Doheney Pipkin (mandolin, vocals) in a black dress and boots.  Slightly behind was Dave Pipkin (stand-up bass) and Brian Griffin on drums.

The set opened with the slow building, "You Can Be All Kinds of Emotional".  From the first note the partisan crowd was overly enthusiastic.  As the song grew, Williams, Elmquist and Pipkin hopped around the stage which met with hootin’ and hollerin’ approval. "You Never Needed Nobody" followed which featured the band’s signature three-part gospel tinged harmonies.  Lyrically, the band’s songs speak to life’s peaks and valleys.  The music also ebbs and flows with the big swings of a full moon tide.

The bitter, painful dirge, "Two Sides of Lonely" captured the crowd with soaring, ethereal harmonies, while the song’s antidote "Tree of Life" followed.  The commercial sounding, toe-tapping, sing along chorus, "Green Eyes and a Heart of Gold" was another crowd favorite.   The sound at this point was as if some maniacal musical genius had mixed the DNA of Old Crowe Medicine Show and the 80’s alternative band, Big Country.

The bluesy "You Don’t Love Me Like You Used To" featured Kanene’s soulful vocals.  The song was dedicated to her father, who was born in Somerville on April 20.  William’s briefly mentioned the band’s support for Boston at which point Brian then followed with the hymnal like "Watch Over Us".

The pace picked back up with "The One You Should Have Let Go" another rocker which had the band and crowd peaking at the same moment.  Set closer, "Teach Me To Know" ended with the band standing on the monitors directing the adoring crowd in a sing along.  Between the material and the musicianship there is no doubt that the Lone Bellow will be at the arena level in short order. Their live show removes some of the record’s Nashville slick, production varnish which allows the music’s roots and influences to shine through- in part its almost like attending a good ol’ Southern Revival.

In honor of National Record Store Day, The Lone Bellow did a four-song acoustic in-store performance at the Faneuil Hall Newbury Comics.  The event was well attended by about fifty people. Half way through the first song every customer in the store was captivated.  Despite being overdue for sound check band members Zach Williams (guitar, vocals) Brian Elmquist (guitar, vocals) and Kanene Doheney Pipkin (mandolin, vocals) were kind enough to answer a few questions.

How did the Lone Bellow get started?

Zach:  Me and Brian are old, old buddies.  I had a little life transition thing and wrote some sad songs about it.  I needed some safe haven for the songs.  Brian and I grew up in the South listening to Country music.  I stopped by a diner in New York where Brian was working.  I asked if he was interested in work shopping the songs.   The next morning at 9 AM we had a rehearsal with an eight-piece band.

Where does the name come from?

Zach:  First it was Zach Williams and the Bellow.  I didn’t think that reflected our values of making music together.  So I took my name out.  The Lone Bellow is a stand-alone feeling for us, that’s how we got to it.

Are you surprised at the overwhelming positive response?

Has this project been an accidental success?

Zach:  Yeah, this started off as a Kickstarter project, we made the record in New York over 2 and a half years ago.  We wanted to do our best to steward the music.  It took two and a half years to find the people who care about the music as much as we did.

Musically the album covers a lot of ground from 20’s vamp to country to Americana where does the diversity come from?

Brian:  We just played what came natural.  We weren’t looking for a particular sound.  We were just trying to capture what we were doing live.

Kanene:  I think we all have pretty eclectic music backgrounds and that comes out in the writing.  We all grew up in the South listening to country but also R & B and Motown what was on the radio at that time,  Brian and I sang in choirs. 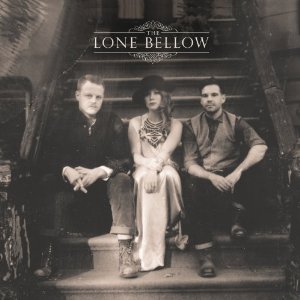