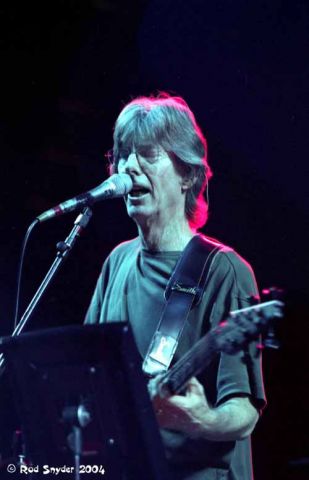 Under the blazing sun, Phil Lesh and Friends (Larry Campbell guitar, Barry Sless pedal steel, Joan Osborne vocals, John Molo drums, Greg Osby sax, and Rob Barraco keys) began stretching it out from the first note, with a patient jam that eventually fell into “Truckin’,” before the band eased into some bluegrass with the help of Mike Gordon on electric banjo. With the low end guest still on the stage, the twang of “Cumberland Blues” rang perfect in the heat, and the “Big River” that followed was more ramshackle, with Gordon stumbling at points, but still pleasant to the ear. Larry Campbell (looking like Gram Parsons) added a few vocal stanzas in the delta marching “Stagger Lee” and made his presence known with a few searing lead guitar lines. But it was the set closing blues of “Sugaree” sung by Joan Osborne that proved sweetest. Dressed as the Virgin Mary clad in white, she was more reserved than in past outings, and though not notably exuberant, she always brings her deep, passionate vocals to the free-wheeling musical dynamo.

Lesh’s extra-loud bass opened up the second set with the old warhorse of “Playing in the Band,” and followed the playful rocker with the night’s highlight, the massive “Eyes of the World,” on which Osby’s spirited sax accompaniments reminded many of Branford’s contributions on 3-29-90 to the same song, immortalized on Without a Net. The “Eyes” meandered with some arpeggio runs and colorful fills that never felt forced, as if the musicians were on a casual sunset stroll. “Magnolia Mountain” – from Ryan Adam’s acclaimed Cold Roses – added a contemporary compostion to the vintage setlist before the “Turn on Your Lovelight” and booming “Help On the Way> Slipknot!> Franklins Tower” that followed upped the energy quotient, as the amphitheater grew abuzz when the much anticipated red headed guitar player walked out for the “Franklins Tower” intro. Trey Anastasio’s appearance was a welcomed spark, but his contributions didn’t stand out as much as fans had ultimately hoped, with his part merely blending with the collection on stage as another of Phil’s friends. Though his reappearance for the encore of “Going Down the Road Feeling Bad” pumped up the early evening crowd for the second half of the night.

Forty minutes or more after the encore, the lastest post-Phish outfit, loosely entitled, Trey Anastasio & Mike Gordon with The Benevento/Russo Duo, took the stage. This being only the band’s 4th show together, you have to question the nature of this pairing as equal co-headliners. Despite the unquestionable talent, it’s fair to say this infancy stage band should be claiming the opening slot each night, allowing audiences to see the unpolished foursome experiment without the added expectations of closing a complete day of music – not to mention following Phil’s impressive performance. 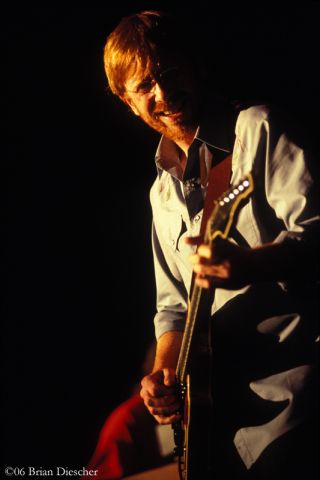 That being said, some intriguing promise was shown, most notably in the Gordon penned “Suskind Hotel,” which became a flight of electronic adventure. The set opening, riff-heavy “Plasma” and dark “Mr. Completely” were well done and entered uncharted waters, but too often the group floundered with simple thoughts, not complete songs.

When Trey initially went solo in ‘99 with his own trio, you had a sense that he was trying to break away from Phish and develop his own voice. Then when he incorporated horns and a back-up singer, it seemed he was stretching himself as a band leader. Even his recent pop/rock outfit was a new direction for Anastasio, letting him flush out his obsession with sun/moon/star/sky lyrics and a more mainstream career path. Though this latest project is somewhat full circle. It actually seems odd that after all that purposeful separation, he’d choose to join forces with The Duo and Mike – an unofficial trio that had a good thing going. The four of them together is easily the most Phish influenced work Trey has done since, well Phish. Throw 10,000 tie-dyes in the mix and you’re basically right back where you started, but with far less polish and flair.

Comparing this outfit to one that played together for over 20 years isn’t fair, but it was telling that the best reception “GRAB” received on this night was in their playing of The Beatles “Get Back.”

Send any comments and locations with good Guinness to Shawndonohue@yahoo.com