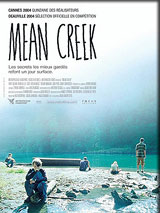 The search for a moral compass has become a major coming of age theme in indie films over the last year or so (see: Elephant, The United States of Leland – even in some ways, Closer). With today’s blending of news and entertainment, it seems we are fascinated with how ambiguous right and wrong have become. Mean Creek, which has just been released on DVD for those who missed its theatre run, tells the story of a group of teenagers whose plot to get back at a bully becomes a rocky journey of friendship and responsibility.

First time writer-director Jacob Estes uses his talented cast, including Rory Culkin and Joshua Peck, to confront life’s ambiguity by bringing teenage angst to the surface and allowing it to simmer and spill into the different cracks of our moral barometer.

You’ve talked about your bully being a big part of how you were inspired to write Mean Creek. Did you ever find out what made him tick?

As soon as one bully falls into the background noise, it seems another is sure to emerge. I think as adults, there are bullies everywhere, although their apparent sadism is manifested perhaps through means of aggressive manipulation rather than physical brutality. I think we are each the victim and the victimizer at different times, although some of us may fall to one side much more heavily. People behave out of all kinds of motives. Most of them neurotic, if neurotic has any meaning to you. The biggest bully I know today is just plain old insecure about himself, as a man via his professional status. He acts out in all kinds of aggressive ways as a result, sabotaging himself beyond belief. He even understands his own mechanisms, but he just can’t help himself to fall into his own traps.

Can you recall any poignant childhood moral dilemmas of your own?

I did all kinds of horrible things. I chased around girls with dog shit scooped up on a stick. I called people names. I lied. My father was gay, and so I was always trying to figure out who I could be honest with and who I couldn’t. Until I finally decided just to be honest with everyone. That was only a moral issue in the sense that I had to realize that it was immoral to pretend my family was something other than it wasn’t. It was immoral because the world needs to know about the reality of sexual identity, because the more it is kept secret, the more bigotry and hatred is allowed to fester. What else? Yah, I used to steal my dad’s change out of his car to go play Donkey Kong. The worst thing I ever did was on the scale of putting a live snail in a microwave to watch it explode. I felt pretty bad about that, but there was nothing I could do to recoup after the thing exploded except change my future behavior. Luckily I didn’t turn out to be Jeffery Dahmer.

How did you approach working with your young cast? Was there anything in particular you needed to either treat differently or take into consideration?

I treated them like intelligent adults. I gave them a lot of respect. I let them be their own boss. I gave them the tools I thought they needed. I was careful especially not to step on them, because kids don’t recover from being stepped on by adults as fast as other adults do—much less kid actors. I listened to my wife, who has done some teaching in her life, about how kids benefit from Maria Montessori’s teaching methods. So I generally practiced the Montessori school of directing, telling them what I saw in their performance and what I’d like to see different next time, rather than praising them all the time or telling them they could do it better, or more something-or-other.

Which character from Mean Creek do you most identify with?

I identify with all of them for various reasons. With George, I identified with the way he felt about himself—persecuted, fat, lonely. With Clyde I identified with the structure of his family life—the way he so desperately needed to stay in social situations with Marty, despite Marty’s blatant homophobic taunting. I didn’t identify with Marty. And the other characters just seemed normal to me, a lot like me in the sense that they were just trying to figure out the right thing to do, how to deal with social boundaries and moral quandaries the best they knew how.

Does being the writer and director offer a greater ease or challenge in making a film?

I’m very attuned to the material I write. I feel I know what it’s about, even when other people don’t. When I read other people’s scripts, I’m sometimes struggling to figure out what it’s about. As a writer, I practice a kind of rigorous detachment in the rewrite phase. I listen to people and I take pride in not being defensive. So my work gets better as a result but it also becomes a malleable form—in other words I try not to get attached to words even in the writing phase unless they’re obviously marvelous. After all the rewriting of Mean Creek, by the time I was directing it, it was as if it was and wasn’t my script. As a director, I didn’t feel bound to the words, as I understand is the common perception about writer-directors. In a way, I felt liberated to change them any way I wanted to on set, and I felt like the actors could do the same thing, which was a very nice feeling. My only job regarding the words was to make sure that whatever was said off script was still serving the story.

When you look back on making the film, what immediately jumps out to you? As a project, what is the film’s defining moment?

Casting Josh Peck as George. Without him we had no movie. With him, we had a pretty darn good one. Also hiring Sharone Meir as the DP. He dropped out of reality with me for two months before we shot the movie and we processed the entire script visually. That was a key collaboration.

If you could change anything about the film, what would it be?

First of all, in some instances of making a film, politics can override reason. In that light, the truth is that originally (as scripted), the fight sequence at the beginning where George pummels Sam was going to be all told from the point of view of the fallen video camera. But the politics of the situation demanded we shoot some internal coverage of the fight also, which looked fine and we did well. Unfortunately, those same politics existed in the cut of the film. To be certain, a mental weakness on my part to defend what I felt also existed while we cut the film. That mental weakness was particularly acute as it pertained to that spot in particular. There was also a feeling that it didn’t matter either way. So much of what I wanted in the film, was in the film. The film was not truly going to suffer because of politics. If one little piece of the puzzle wasn’t exactly how I wanted it, I could live with that. There’s not much else I would change—maybe a shot here or there that is of no real consequence.

What current themes are you writing about or working on now?

Vanity, fear, aggression, charity… I just bought a new chair to sit on so maybe my themes will get better along with my back.

The Making of Big Star: An Interview With ‘Nothing Can Hurt Me’ Filmmakers