Circus Contraption, the Northwest’s premiere one-ring traveling carnival is not your Mama’s circus.  Mixing traditional circus skills such as trapeze and aerial dance, acrobatics, juggling and clowning with elements of cabaret, vaudeville and physical comedy; the troupe also creates its own fantastical masks, costumes, puppetry, props, sets and banners. Created with a leaning toward the surreal, Circus Contraption juxtaposes the dangerous with the whimsical and the exotic with the absurd.  The Circus Contraption Band rouses audiences to their feet with its gypsy-carnival-opera musical theatrics. Glide recently had a chance to speak with Lara Paxton, co-founder Circus Contraption and artistic director, aerialist, dancer, costumer, acrobat, insect tamer, aardvark, stilt walker and fortune teller.

“Tim Burton would sell his soul for just a sip of this vintage vaudeville.”
The Stranger (Seattle)

At some point in our childhood, most of us thought that clowns were scary.  Circus Contraption intentionally embraces this frightful side of the circus.  Where does the impetus for that come from?

Honestly, I am surprised that the ‘darkness’ of our group’s work is what people pick up on and comment about most.  While there are definitely elements – especially from earlier work, that I agree could be a little macabre, much of what we do is very straightforwardly funny, whimsical and cute. We don’t go into the creation of a piece with the goal of disturbing people or creeping them out. Mostly, as we all hang out brainstorming, an interesting theme for the next show emerges.  Then I, along with anyone else in the group who’s motivated, tend to do some research on it.  For example, for Dime Museum I put together a notebook with a statement about mood, some examples of characters that could be in the show, and pictures of costumes, art, sets, toys and mechanical amusements that could serve as inspiration.  It’s kind of like putting all the ingredients for a stew into a crock-pot.  Then people simmer on it a while, and we see what ideas come out.  We really strive for each performer to create work that thrills and delights him or her, stuff that will be fun to think about, craft and then perform over and over again.  Maybe it speaks to the eccentric tastes of some of our members that what’s fun and appealing to them is creepy to many audiences!

Explain the "Contraption" part of what you do, or don’t do:

Originally, we thought the group would be more performance-art oriented… less a literal circus and more circus-themed.  So ‘contraption’ kind of meant ‘thingy.’  Like when you say something like ‘hand me that potato masher thingy.’  As the group grew it included members who wanted to showcase circus skills.  Now the contraption could refer to the many props that our members create for use onstage in their pieces.  For example, Colin, our juggler, welded the big bicycle he rides six performers on during the show.

The lineup for the upcoming Sea of Dreams New Year’s event in San Francisco includes Circus Contraption, some familiar music acts (String Cheese Incident, ALO, etc.) and several other circus and burlesque acts.  To what do you attribute the rising inclusion of circus, vaudeville and burlesque in more mainstream music events?

Almost since our group started around eight years ago I’ve been thinking we were reaching the peak – and thus imminent decline, of the circus resurgence.  I think the genre appeals to people because it is so malleable.  There is room for performers with many different types of talent. There are clever ways to make the most of what you can do: for example, those of us who weren’t trained 12 hours a day from the age of two can enhance our skills by thinking creatively about theme and presentation.  You can choose to be serious, funny, political, sensual.  Aside from physical safety, there are no rules.  Circus also has an undeniable sexiness about it.   And it’s a very immediate kind of sexiness, very alive.  It’s not the airbrushed, anorexic, unattainable appeal presented in popular media.  You can look at almost anyone performing in a renegade circus and think, ‘wow, I bet they’d be really fun to fuck.’

While you’re based in Seattle, you recently completed a seven week run of your Grand American Traveling Dime Museum in New York.  How does the audience reaction to your work differ from coast to coast?

We were intimidated by the thought of performing for New Yorkers, just because they are constantly surrounded by the best of the best in performance.  Actually, though, if anything, I think we were even more warmly received in New York than in Seattle.  New York audiences laughed more.  I found it really fun and gratifying, actually.  There are a lot of little moments in my acts that I always meant to be funny, but that usually didn’t get that response in Seattle.

I also think that coming to a city from another place gives you a little leg up.  It’s fun for people to see something that has been created and seasoned entirely in another part of the country plop in their lap.

What does it mean to operate your performing group as a non-profit?

It’s pretty much a specific legal definition for the Circus as a corporation.  It makes us eligible for a lot more grants.  It allows folks who donate money to write it off as tax-deductible.  It doesn’t mean we can’t earn money or get paid as performers.

You and other members of Circus Contraption teach workshops in circus arts.  Are there many people that come to see you that want to run off and join the circus?

I have been teaching aerial in Seattle for five or six years now, and it’s been one of the best things in my life.  My students are the warmest, coolest people. I always leave class with more energy than I had before.  I do think people who see the show think that it looks like a lot of fun.  I think our group comes across as we really are: a kind of loving but slightly dysfunctional family that throws together crazy shows by the seat of our pants.  It’s natural to want to be a part of that in some way.  We have been really lucky that our performances have drawn an amazing group of supportive volunteers.  We would never be where we are without them.  It’s one thing to love the show, it’s another to hang out afterwards, sweeping up popcorn at two in the morning.

Describe the feeling of flying through the air on the trapeze during a performance.

I’ve been involved in performance for about twelve years, and, sadly, you get a little desensitized to the magic of it.  Sometimes it really is just a dumb job, only instead of chopping veggies or cleaning floors, you’re pulling on tights and putting on make-up.  But then there are times that magic flies vividly back to you.  It’s at moments you might not expect.  Often for me, more than when I’m actually doing an act on stage, it’s backstage while I’m waiting to go on.  The dim red lights make everyone look very poetic.  The smells of sweaty costumes and rosin are very evocative, and I do feel this welling-up of connection with performers from past centuries.  In those moments I have a sense that I’m part of a real history and tradition.
For more info see:
Circus ContraptionSea of Dreams NYE 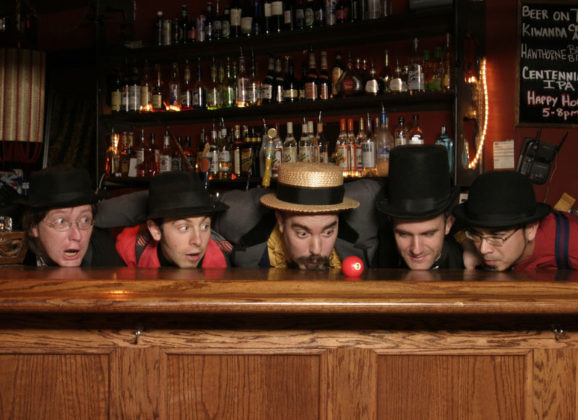 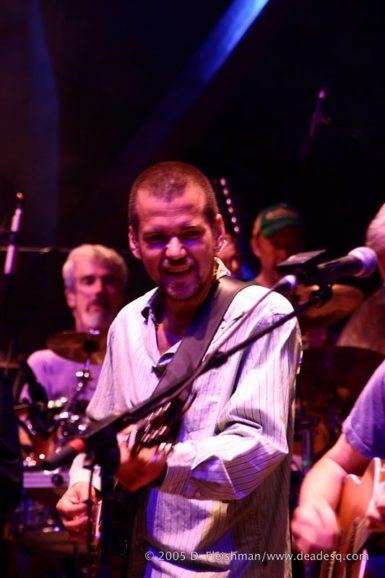