Warren Haynes’ Christmas Jam has been around for 18 years, but was a strictly provincial affair up until the late 90’s. WarrenBase, the side project section of the indispensable MuleBase, reveals that it was still a loose gathering of acoustic and electric sets, local bands, and the appearance of only one or two major acts before it began to mushroom.  Later it moved to the Thomas Wolfe Auditorium, and finally the main arena in the Asheville Civic Center, where it’ll presumably stay.

Now, of course, the event is a behemoth, and this year the Christmas Jam sported a jaw-dropper of a lineup that including Gov’t Mule, The New Orleans Social Club, Dave Matthews, The John Popper Project, The Taj Mahal Trio, Marty Stuart and his Fabulous Superlatives, and a gallery of additional jam-hands and collaborators. Tickets get tougher every year, as some sources listed all 7,200 as being gone in minutes this year. The tickets headed to fleet-fingered buyers in 42 states and, according to the Asheville Citizen-Times, as far away as the Czech Republic.

Structurally, the Christmas Jam means a bunch of announced acts, supple for genre-melding, with a guaranteed blowout at the end from a Warren Haynes-led band that’s usually Gov’t Mule but has also been a collection of Mule or Allmans-associated players. Unlike at  similar events (say the Jammys), the collaborations at the Christmas Jam are far more logical–and certainly genre-splicing at times- the emphasis is on serious and electrifying music, and not the giddy, but inchoate thrills of, say, watching Travis Tritt jam with the Disco Biscuits.

This year, 7:05 p.m. was your starting gun, and the last harmonic resolution of the night was called to order ’round 2:30 a.m. The people danced, and the Sweetwater 420 Pale Ale flowed. And there were newsmaking moments of all kinds, not the least of which was a slew of sit-ins from the most recent American Idol victor Taylor Hicks.

Slotting all these players means bumper cars pretty quick, and Haynes does a stellar job of both assigning sit-ins and leaving enough room for on-the-spot script changing. That does mean some of his artists get shortchanged and the distribution of talent slightly lopsided. Both Dave Schools and Brendan Bayliss, for example, didn’t see stage time until about 1:45.

The question mark this year was Dave Matthews, whose appearance on the bill guaranteed not only a sell out (Haynes could these days manage that easily without even announcing the talent ahead of time), but a lightning fast one, and an injection of Dave fans who pushed to the front for his set and then went toward the exits as soon as he was gone. Predictably baked and amusing, Dave did right by the jam crowd, choosing some of his best songs for the occasion. "Bartender," the country ballad "Grace is Gone" and the swampy, sexy "Crush," were all transcendent in the acoustic format.

There was some palpable worry among the ranks of the jam faithful that Dave was going to close the evening instead of the Mule. His name was first on the marquee, he was the highest profile guest in the house, and Mule tech Brian Farmer and his crew configured the stage in the Mule set up after the New Orleans Social Club had wrapped. But it became clear that something far more interesting was afoot: there would be no clear marker where Dave’s set ended and The Mule’s began.  The tune selected to bleed the two together was a towering "Cortez the Killer" as Matt Abts, Danny Louis, and Andy Hess filled in behind them.

At the end of the night, it was time for a hymn, as various mic stands were shuffled around behind the stacks and Farmer went about preparing more guitars. As a good percentage of the night’s talent filled in any remaining stage space, Warren asked the crowd, "So, have you guys ever seen ‘The Last Waltz?’" and there was a collective energy rush as it became clear what was to come – “I Shall Be Released.”  Another Christmas Jam, another year, another triumph.

BAND OF THE NIGHT: Though there was nary a dull moment in the whole stretch, there was no stopping Marty Stuart and his Fabulous Superlatives, who wasted not a minute of their allotted 50. There was roadhouse, there was gospel, there was "Great Big Woman, Little Bitty Bottle of Wine" and "In the Pines." It was hot shit the whole way.

BEST SIT-INS: Where to begin? Randall Bramblett turned "Mule" into a futuristic boogie freak-out during Gov’t Mule’s set, tricking out his tenor sax to sound like a full brass-and-woodwinds orchestra. The three-man harmonica blowout–John Popper, Taylor Hicks and Mickey Raphael–in the middle of the Social Club’s "Walkin’ to New Orleans" was a hair-stander. But for the historical combination and the ephemeral, one-time-one-night-ness of it, you’d have a tough time beating Gov’t Mule’s "Leavin’ Trunk," which brought Taj Mahal back to the stage and stacked him between Haynes and Branford Marsalis, blazing away on a harmonica with the full weight of the Mule behind him.

CONSPICUOUS ABSENCE: Edwin McCain. Even if recordings are your only exposure to the Christmas Jam, you know McCain’s soulful strains are a staple. Along with Mike Barnes, Kevn Kinney and a handful of others, he’s been there since before it got big. Though hardly a void–there’s no "void" in a lineup like this–one of those nourishing three way harmonies between Haynes, Kinney and McCain was a missing piece.

BEST NOD TO THE OLD SCHOOL: Taj Mahal is the epitome of the old school, and the Social Club is the sound of timeless Crescent City, but for the jam faithful, it was a treat, as always, to see Col. Bruce Hampton serve up his spacey psyche-rocker "Time Is Free" with an appropriately genre-unspecific ensemble (the John Popper Project) to back him. Being treated for illness and almost retired from the road, Hampton is visibly withdrawn, but he was nodding his head, tapping his toes, and harnessing the rock.

LEAVE-US-HANGING MOMENT: During Taj Mahal’s set, the wily old master finally went over to his banjo, and began to pick a bit, testing the waters for what was likely to be "Fishin’ Blues." Alas, Mahal gave a disgusted grunt (presumably at an inability to get to the tuning he wanted), and shelved the banjo. He wouldn’t go near it again, despite audible pleas from the crowd.

MVP: Uncle Warren doesn’t count: it’s his party and you know he’ll be up there most of the time. But mega special guest Branford Marsalis was up there almost as often, sitting in (and enhancing) every act except the Taj Mahal Trio. He harnessed the cool funk of the John Popper Project’s "Lapdance," stuck a bit of Stax/Volt into Marty Stuart’s "Wait Til the Morning," and anchored jam after transcedent jam with the New Orleans Social Club ("Lovin’ You > Africa" being truly sublime). He stuck it out right into the Mule, set, too: smoky tenor in "All Along the Watchtower," sprightly soprano in "Soulshine."

Runner-up: Mickey Raphael, whose calming harmonica sound was a nice contrast to John Popper’s blitzkreig of notes and Taylor Hicks’ strained intensity. He appeared alongside Dave Matthews and Haynes for "Long Black Veil," drawing out the tune’s ancient roots.

VISUALS: Too many to designate. How about Warren Haynes and Kevin Kinney, old buddies sharing a song? Or, Haynes shredding while the hulking Taj Mahal got eye to eye and shoulder to shoulder with Andy Hess, driving the rhythm section of "Leavin’ Trunk" as Branford Marsalis blew underneath? Or maybe it was Marsalis embracing Ivan Neville after the Social Club set, filling a snapshot of New Orleans’ great musical families in momentary union? Or Blues Traveler’s Tad Kinchla driving the groovy John Popper Project, egged on by Col. Bruce?

LEAST EXPECTED SIT-IN THAT DID HAPPEN: Branford Marsalis with Marty Stuart, "Wait Til the Morning." You wouldn’t peg Marsalis’ stately sax playing as the easiest fit for Stuart’s crew, but that’s the thing about top-flight artists and creative minds: they mesh, with no seams.
MOST EXPECTED SIT-IN THAT DIDN’T HAPPEN: George Porter Jr. with Gov’t Mule. Warren Haynes must have a bear of a time figuring out how many of the night’s performers he’s going to slot in for a Mule kick, but those patrons feeling nostalgic for a nod to the heady Porter/Mule tours of 2002 were left holding their breath. Then again, Haynes did rip it up with the Social Club, so where’s the complaint?

LEAST EXPECTED SONG THAT WAS PLAYED: Everything is fair game for the Mule, which has rarely met a cover it couldn’t make into something special and, well, Mule-ish. Still, leading off the encore with "Sugaree" was a kind surprise, made even kinder with Stuart’s mandolin, Bayliss’ guitar, and harp and harmonies from Taylor Hicks.

MOST EXPECTED SONG THAT WASN’T PLAYED: Had you looked at all the acts on paper, judged the occasion and thought about song selections, no one would fault you for guessing Dave Matthews’ tender "Christmas Song" as making the cut. Alas, no dice.
I SWAGGER LIKE YOU BRUSH YOUR TEETH AWARD: Marty Stuart, his billow of hair all around, his fingers married to strings and light glinting off his leather pants, clearly owns the spotlight. Or how about Henry Butler, stage right behind his electric piano, banging out stride lines with decades of authority, with Leo Nocentelli to his left? And Taj Mahal, a larger-than-life presence, prowling the stage, shaking ass and punishing his guitar?

GOOD SPORT AWARD: Audley Freed and Mike Barnes. Again, logistics mean you can’t have 30 musicians on stage at a time, much as you’d like to. But Freed and Barnes, fixtures of the jam for years (and in Barnes’ case, decades) were on stage for only a song a piece in seven and a half hours: Freed lending a solo to Kevin Kinney’s "Blues On Top of Blues" and Barnes for the Dylan finale.
WELCOME TO THE PARTY: Brendan Bayliss, humble, and happy to be there, despite what was reportedly a long day of travel for the Umphrey’s axeman. Emerging for "Sco-Mule" during the Mule set, Bayliss laid a dazzling, sheety solo and then answered Haynes’ call for a good old-fashioned guitar duel. Bayliss is reverent, but isn’t afraid to push the envelope even when surrounded by musicians twice his age and five times his stature. Don’t be surprised if Umphrey’s McGee is the first band announced for Xmas Jam 19 in December 2007.

"He just dosed me. In an hour I’ll be freaking out as an elephant tries to eat my face." – Dave Matthews, handed a bottle of water for his sore throat

"THAT right there, is why we have to rebuild New Orleans." – Warren Haynes, at the end of the New Orleans Social Club set

"Checkin’ Up On My Baby" Taj Mahal Trio

PLEA FROM A SATISFIED MUSIC FAN TEMPORARILY STEPPING IN FROM HIS JOURNALISTICALLY OBJECTIVE DISTANCE: Keep it rolling, Warren. This is one of the year’s most important musical events, aging gracefully and growing ever more exciting. 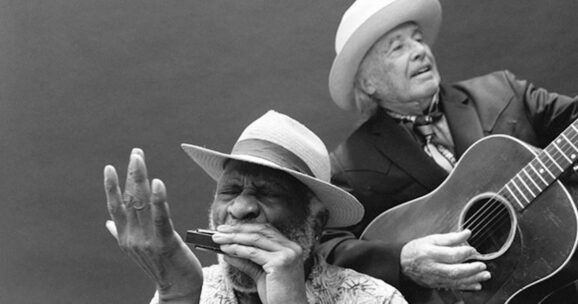 Taj Mahal & Ry Cooder Reunite After Half-Century on ‘Get on Board: The Songs of Sonny Terry and Brownie McGhee’ (ALBUM REVIEW)