As we mourn the loss of James Brown, who suddenly passed away on Christmas Day at 73, we remember Brown as more than just the Godfather of Soul. He was also: Soul Brother Number One, Mr. Dynamite, The Hardest-Working Man in Show Business, Minister of The New New Super Heavy Funk, Mr. Please Please Please and The Boss.

Yes, the man of many titles was also the commander in chief of genres that formed from his evolution of gospel and rhythm & blues into soul and funk. Out came disco and hip-hop, as Brown would set the standards for all funk bands that hoped to set a spell on an audience and keep em’ dancin’  Although his music speaks for itself, Brown was outspoken and his loud individuality (and tattooed eyebrows) made his common birth name, unique in itself. While there’s no better time than now to revisit Live at the Apollo, (1963)  The Payback (1973) or In The Jungle Groove (1986), we couldn’t help but share 20 of James Brown’s greatest quotes.

– “I’ve outdone anyone you can name – Mozart, Beethoven, Bach, Strauss. Irving Berlin, he wrote 1,001 tunes. I wrote 5,500.”– “Hair is the first thing. And teeth the second. Hair and teeth. A man got those two things he’s got it all.”– “When I’m on stage, I’m trying to do one thing: bring people joy. Just like church does. People don’t go to church to find trouble, they go there to lose it.”– “… I’m not going to be joining ZZ Top. You know they can’t play my stuff. It’s too complicated.”–  “The one thing that can solve most of our problems is dancing.” – “[Life philosophy:] I don’t really care what people think, … I just do my own thing. … I like being loud and letting people know I’m there.”– “Retire for what? What would I do? I made my name as a person that is helping. I’m like Moses in the music business.”–  “I’m twice as old, but I feel good.”– “I got a wife who likes expensive things, so she takes all the cash.”–  “I taught them everything they know, but not everything I know.”– “Sometimes you struggle so hard to feed your family one way, you forget to feed them the other way, with spiritual nourishment. Everybody needs that.”      – “It doesn’t matter how you travel it, it’s the same road. It doesn’t get any easier when you get bigger, it gets harder. And it will kill you if you let it.”– “I used to play one job and have 125 pair of shoes on the floor. What was I doing? I couldn’t wear but one pair.”– “My expectations of other people, I double them on myself.”– “Now, we own a publishing house that’s way up in the billions of dollars and gets bigger and bigger. That’s probably the only thing that makes me look like Bill Gates!”–  “Sometimes I feel like I’m a preacher as well, ’cause I can really get into an audience.”–  “The hardest thing about being James Brown is I have to live. I don’t have no down time.”–  “I did the thing with bonds, which was about 30 million dollars, and didn’t get none of the money on them.”      –  “They had a chance to see me look good and perform and be so neat again. A lot of young people felt shaken, ’cause there I was, 70 years old, looking half as young as they did!”–  “You can’t teach others if you are living the same way.” 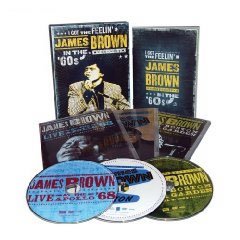 James Brown: I Got the Feeling: James Brown in the 60s