Madness, mayhem, David Bowie? No, but more on that later.

Lollapalooza ended with attendees divided between the long-awaited return of a grunge hero and indie wall-of-sound innovators. But before Soundgarden and Arcade Fire closed out the fest on Sunday, those gathered witnessed the use of a keytar in a cool way, some recycled weed references and MGMT’s snooze-inducing new music.

If it ever felt more crowded than years past, it’s because Lollapalooza 2010 brought a record 240,000 people to Chicago’s downtown, with about 80,000 in attendance on each of the three days.

Yeasayer started my day after narrowly missing Hockey. The New York trio is among an ever-growing contingent of electronics-colored rock, but they stand out as one of the few whose music still retains organic emotional feel in spite of the toys. They rallied the crowd gathered up north through several tracks off their album Odd Blood that ranged from brooding contemplation to bright upbeat release.

Read about Phoenix, Metric and Cut Copy in Day Two

Read about Mavis Staples, Lady Gaga and the Strokes in Day One

READ ON for more from Day Three of Lollapalooza… 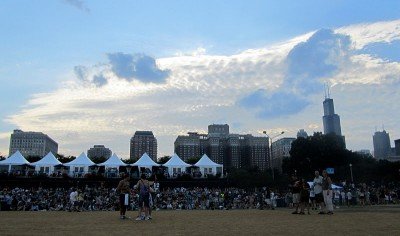 Gogol Bordello served as the rowdy greeters to day two of Lollapalooza 2010. Describing the band as gypsy punk sells them a bit short, though Ukrainian born bandleader Eugene Hütz has used the same words to describe his world circus ensemble. Hidden Track’s Benji Feldheim courageously covered Gogol Bordello and the rest of  this past weekend’s Lollapalooza festivities at Chicago’s Grant Park.  Head on over to Hidden Track Day Two coverage where Benji covers sets by Deer Tick, Metric, Social Distortion, Cut Copy and Green Day.  And for Day One coverage swing on over to this link where the likes of Drive By Truckers, Mavis Staples, Devo, Black Keys and The Strokes.

Gogol Bordello served as the rowdy greeters to day two of Lollapalooza 2010.

Describing the band as gypsy punk sells them a bit short, though Ukrainian born bandleader Eugene Hütz has used the same words to describe his world circus ensemble. Racing punk drumbeats serve the backbone for snaky violin and accordion, furious chords and Hütz’s vital yelping vocals. As a testament to the combinations of Romany Gypsy music, punk rock and eastern Europe folk, Hütz introduced all band members by nationality. Those mentioned included Ecuador, Israel and Russia, after a stomp rousing Start Wearing Purple to close their set.

Onward back up north we went through the woods back to the Sony Bloggie Stage to hear Deer Tick and their haunted blues-spiced rock sounding straight from the south. But it’s not. Somehow they are from Providence, R.I. but they sound like anywhere between Memphis and Georgia. Singer John J. McCauley III led the quartet with a high-pitched rasp, and the band keeps pace with clean tones, even with distortion.

Metric greatly aided a clear trend among the Friday and Saturday performances where the women stood out farther than many of their male counterparts, a great feat to see among male-dominated festivals. Taking better parts of dance rock like clear melody lines, dynamic changes in the instrumentation and overall high energy, Metric will likely be remembered as a stand out set from this year. Singer Emily Haines whirled around the stage, capturing the audience with her movements, but then backing it all up with her emotional vocals, especially during Help I’m Alive. Metric performed a deep set with drummer Joules Scott Key, guitarist James Shaw and bassist Joshua Winstead producing equal parts organic beats and distorted synth-inflected noise.

READ ON for more on Day Two of Lollapalooza 2010…

Lollapalooza has never been a quick jaunt around Grant Park.

Try to see too many of the 126 bands and DJs performing at the ever-growing festival behemoth, and much will be missed getting to and from stage to stage. But this year, a new addition to the grounds made it easier to trek from north to south with ease compared to past years. The grounds were extended west toward Michigan Avenue, giving all attendees the use of Columbus Drive as a walkway.

So with the welcome drop in humidity on Friday and more room to maneuver on the grounds, Lolla Day One started off with soul. Raphael Saadiq on the south big stage was a good warm up with horns blazing while he sang, but I only caught a minute before jogging up north to see Mavis Staples.

A major force behind 60 years of gospel, blues and soul singing, Mavis Staples rallied the growing Lollapalooza crowd as if she was still teaching The Band how to sing. The group’s harmonies during The Weight brought me chills as Mavis and crew belted out reflections of pain and struggle. Jeff Tweedy appeared to play guitar on a song from the group’s new album he produced, but he knew to just let Mavis do the singing. Her voice still rich and striking after decades kept the crowd focused.

READ ON for more on Day One of Lollapalooza…

Ernie Hendrickson and the Make Believe : Only A Dream 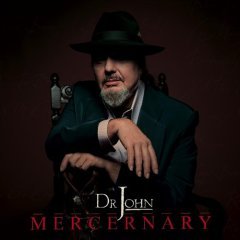 A gorgeous time capsule with a hard beat.