The Rolling Stones’ 2002-03 Licks world tour posted the second-highest gross ever, Billboard Bulletin reports. The tour grossed nearly $300 million and played to more than 3.4 million people, putting it behind only their own marathon Voodoo Lounge stadium tour, which grossed $320 million in 1994-95.
For Licks, the Stones played stadiums, arenas and theaters — sometimes all three in the same market — and filled venues to 99% capacity over 116 dates. Billed as the band’s 40th-anniversary tour, Licks began Sept. 3, 2002, in Boston, and ended Oct. 2 in Zurich.
Source Billboard.com.

Stephen King was expected to remain in a Maine hospital on Thanksgiving as he recovers from pneumonia, a spokesman said.
Bangor Daily News reports there appears to be a connection between the pneumonia and a 1999 accident in which King was struck by a van and nearly killed while walking near his summer home. He suffered a punctured lung and a broken leg, hip and ribs in the accident.
The puncture resulted in a “fair amount” of scar tissue in King’s lungs, creating what doctors see as a vulnerability to ailments such as pneumonia, Silver said.
The best-selling author had been diagnosed with pneumonia in his right lung before a recent trip to New York to receive an honorary National Book Award for lifetime achievement. His condition worsened when he returned to Maine and the pneumonia spread to the other lung, Silver said.
King checked into the hospital Sunday. He underwent a procedure on Tuesday to remove fluid and scar tissue from the right lung, Silver said.
Source yahoo.com.

Fans of the late Johnny Cash have a lot to keep them occupied: A box set being released Tuesday contains a staggering 64 never-heard-before recordings.
The five-disc box, “Unearthed,” is all material recorded during the last decade, during Cash’s fruitful partnership with Rick Rubin, who had been known best as a rap and rock producer.
Cash died September 12 at age 71 of complications from diabetes.
“It seems like a nice punctuation,” Rubin said. “It seems like a bookend with the beginning of his career and the Sun [Records] work. It’s a beautiful way to sum things up.”
The set includes a duet with the late Joe Strummer on Bob Marley’s “Redemption Song,” and collaborations with Fiona Apple, Nick Cave, Carl Perkins and Glen Campbell. Cash tackles two Neil Young songs, “Heart of Gold” and “Pocahontas,” as well as material by Kris Kristofferson, Dolly Parton, Steve Earle, Roy Orbison, Chuck Berry and Willie Nelson.
Source cnn.com.

Rock duo Ween will release a new live disc exclusively through its official Web site, via its own Chocodog Records. The site will begin accepting pre-orders for the release — documenting an “All Request” concert the band played in July — on Dec. 1, marking the third straight year the band has made a live album available to fans during the holiday season.
The show, performed live on Weenradio.com, featured a set list entirely chosen by fans through voting on the band’s Web site. It includes such rare cuts as “Pollo Asado,” “Demon Sweat” and all five installments of the group’s “The Stallion” song cycle.
As previously reported, Ween kicks off a European tour Thursday (Nov. 27) in Stockholm. Fresh off the August release of its seventh studio album, “Quebec” (Sanctuary), which debuted at a career-best No. 81 on The Billboard 200, the band is also hoping to turn a recording of a recent three-night stand at Chicago’s Vic Theatre into a live DVD.
Source Billboard.com.

Releasing their fourth film in only two years, The String Cheese Incident finally decided to put the shtick aside and simply issue their first uninterrupted, full-length live concert. Recorded during their annual Winter Carnival tour – consistently known for first set sit-ins and second set monsters – this particular selection is the final night of a three-show run at Denver 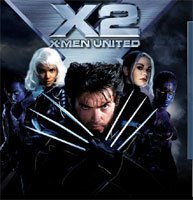 X2 is one of those sequels that truly outdoes the original. With the addition of prolific new characters, a fast-paced plot that focuses on action without detracting from the characters and some of the most impressive special effects to date, X2 makes the original look like a mere introduction. Look out Spiderman, the X-Men are taking over.

When they released their first album of holiday material in September, the Blind Boys Of Alabama said they’d be taking the tunes to the stage. And they’re doing just that for nine shows in December.
Treating fans in major cities from West to East Coast, the Blind Boys will play songs from their Go Tell It On The Mountain CD starting December 9 in Colorado. Mavis Staples and John Medeski are on all dates, while Aaron Neville joins in a handful.
A big show will take place in New York City at the Beacon Theatre. There, the gang will be joined by many of the same guests on their album, including Chrissie Hynde, Michael Franti, Robert Randolph, Charlie Musselwhite and Duke Robillard. Like the holiday shows, the album is chock-full o’ guest appearances, including spots by Tom Waits, Hynde, Neville, Solomon Burke, Mavis Staples, George Clinton, Shelby Lynne, Randolph and many others.
Source Pollstar.com.

David Crosby and Graham Nash will enter the studio in January to record their first album together as a duo in almost 30 years. “We are excited as hell because we have a terrific bunch of songs for it,” Crosby tells Billboard.com. The last Crosby & Nash studio album, “Whistling Down the Wire,” their third as a duo, was issued in June 1976.
The pair is in discussions with several labels, including Sanctuary, says Crosby, adding that the set will be helmed by drummer/producer Russ Kunkel (Jimmy Buffett, Carly Simon).
Backing Crosby and Nash will be bassist Lee Sklar and guitarist Dean Parks, as well as Crosby’s son, keyboardist James Raymond, and guitarist Jeff Pevar of Crosby’s side project CPR. Conkel’s son, Nathaniel, will engineer.
After 11 years between albums, Crosby, Stills, Nash and Young returned in 1999 with “Looking Forward.” Since then, the act has embarked on two major tours and a slew of one-off performances, such as Neil Young’s recent Bridge School benefit outside San Francisco.
Source billboard.com.

The late George Harrison, Prince, Traffic and ZZ Top are among the 2004 Rock and Roll Hall of Fame inductees. Jackson Browne, the Dells and Bob Seger round out the group.
Harrison was previously inducted in the Rock Hall’s 1988 class as a member of the Beatles; former bandmates John Lennon and Paul McCartney have already been inducted as solo artists.
The 19th annual induction ceremony will be held March 15 at the Waldorf Astoria Hotel in New York. A Lifetime Achievement Award /Non-Performer honoree will be announced soon.
Artists become eligible 25 years after the release of their first recording. A Foundation committee nominates eligible artists, who are then voted on by an international body of about 700 music experts.
Source cnn.com.