In America: Life, Liberty and The Pursuit of Family (Interview With Jim Sheridan)

There is no other time more perfect for Jim Sheridan 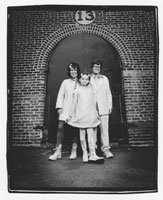 Of all the artists we

If you want to find the pulse of a culture, discover where the innovators are finding inspiration. So with that in mind, we decided to go right to the source and ask some of our favorite artists what they enjoyed most over the past year. Since Glide covers a diverse helping of artforms, we sought out a truly eclectic mix and asked them all sorts of questions, ranging from great music to great moments. With praises you’d expect and many others you would not (see Keller’s affinity for naked kayaking), it’s a candid sneak peak to life off stage. Though, coming as no surprise, it seems every tourbus rolled the highways this year with Hail To The Thief on repeat.

If a picture speaks a thousand words, then Robert Massie

Herein, Chris McGregor of Stage II Design & Production neither confirms nor denies the whereabouts of the oversized sea life remnants included in the Aquarium from Phish’s 1993 New Year’s run. Whether or not the props are indeed stored in Fishman’s basement remains anyone’s guess. Nevertheless, McGregor kindly shares incisive commentary regarding his role in masterminding some of the most epic moments in Phish history.

The White Stripes have confirmed a New Year

Three decade long, rock and rollers, NRBQ will be the subject of a tribute album, “The Q People,” to be released March 9 on the Boston based Spirithouse Records. Artists on the album include Bonnie Raitt, R.E.M. guitarist Mike Mills, Los Lobos, Widespread Panic, J Mascis, and Steve Earle.
The cast of Nickelodeon cartoon series “SpongeBob SquarePants” also weighs in with the song “Little Floater

There are some Super Furry Animals on the loose next year. The Welsh power pop group is set to add more stamps in their passport books as they take on Europe, North America and U.K. theatres.
The SFAs are taking just a brief rest for the Christmas/New Year holidays before launching their tour January 21 in Madrid. It wraps April 8 in London. There’s no word yet on support acts.
They’ve got a new-ish LP/CD/DVD out since the summer. The Phantom Power disc is yet another notch on the group’s ever-expanding discography list and showcases the group’s taste for eclectic sounds.
The band has been experimenting with different DVD formats to accompany their new albums. Starting with 2001’s Rings Round The World and continuing with Phantom Power, Super Furry Animals have helped design visual “wallpaper” for their music.
Source Pollstar.com.