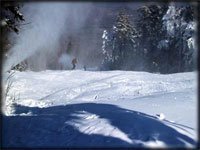 With the unbearable wind-chills and sub-zero temps, this year’s northeast ski season has been less than legendary. There have been some large storms, and snowfalls have been reported steady at various resorts, but lately, braving the cold has been a far greater challenge than the terrain.

In a message posted on the Wilco website – multi instrumentalist Leroy Bach has decided to leave the band.Amongst the departure of Wilco guitarist/keyboardist Jay Bennett in 2001, Bach began to play an important role in the band on rhythm guitar and various keyboards. Wilco is currently wrapping up work on their next record, their is no word on a replacement.

Soul singer James Brown was arrested Wednesday on domestic violence charges, authorities said.
Brown, 70, was booked into the county jail and was to appear at a bond hearing, said jail supervisor Nicholas Gallam.
Brown, who lives in South Carolina, served a 2 1/2-year prison term after a 1988 arrest on drug and assault charges and was convicted of a drug-related offense in 1998. He was granted a pardon by the state in May.
Known as the Godfather of Soul, Brown was honored last month at the Kennedy Center as “one of the most influential musicians of the past 50 years.”
Source CNN.com.

Keller Williams has added a simple way for fans to request specific tunesfor upcoming shows. By visiting kellerwilliams.net and fill out the little form, including date of the show you’ll be attending, and send it on through, you probably have as much control in setlist as Keller himself.

R.E.M.’s July 19, 2003, concert at Bowling Green in Weisbaden, Germany, is captured in its entirety on the DVD “Perfect Square,” due March 16 from Warner Bros. The 23-song set sports such performance rarities as “Maps and Legends” from the 1985 album “Fables of the Reconstruction” and the ancient non-album track “Permanent Vacation.” Prior to the 2003 tour, the former had not been played live since 1989, while the latter hadn’t been unearthed since 1984.
Also featured are “Bad Day” and “Animal,” the two new songs included on the recent best-of “In Time,” plus such R.E.M. favorites as “The One I Love,” “Orange Crush,” “Country Feedback” and the show-closing “It’s the End of the World As We Know It (And I Feel Fine).”
“Perfect Square” is bolstered by the documentary “A Stirling Performance,” which chronicles the set-up for R.E.M.’s summer 1999 three-night stand in the small Scottish town of Stirling. The film features performance footage, behind-the-scenes clips and interviews with the band.
Meanwhile, work continues in earnest on R.E.M.’s next studio album, extensive sessions for which have already taken place in Vancouver. According to a post on the band’s official Web site, group members are in Athens, Ga., writing songs and revisiting some of the previously recorded material. Working titles include “Around the Sun,” “Wanderlust,” “Magnetic North” and “I Wanted To Be Wrong.”
“The band will be heading into the studio in the next few weeks,” the post continues. “We’re hoping for a fall record and hopefully will be touring some of the places we didn’t on the ’03 tour (and some of the ones we did).”
Source billboard.com.