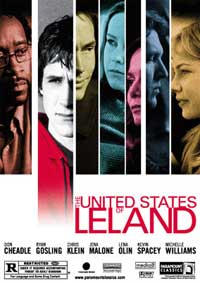 The United States of Leland: The Line Between Good And Evil (Matt Hoge/Jena Malone Inteview)

Matt Hoge talks of his debut film, The United States of Leland. A murderous tale of ironic hope, it continuously dives into emotional intangibles: fear, desire, hate, love. As a result, the multi-layered story offers a cracked window into the heart of tragedy.

Although it’s an election year, politically active singer Natalie Merchant is making time to focus on the music. The singer is doing a series of U.S. dates on both coasts this summer, beginning July 31 in Northampton, Mass., and continuing through late August.

It’s her first road trip since 2002, when she shared headlining duties with Chris Isaak on a cross-country trek. The singer, who keeps a busy schedule of social activism and volunteering, promises that this will be her only tour of 2004.

She’ll be accompanied by the same band that played on her most recent release, The House Carpenter’s Daughter. The album features Merchant’s interpretations of seven traditional folk songs and four covers by the likes of the Carter Family and Fairport Convention.

Liz Phair will headline the Chicks With Attitude Tour, which will visit 18 North American cities from August to early September. Other artists set to appear include Cardigans lead singer Nina Persson, Katy Rose and Charlotte Martin. Maybelline has signed on to be the tour’s sponsor; a preview show will take place May 3 at the Hudson Theatre in New York.

Persson and the Cardigans will launch their first U.S. tour in five years on May 8 in Hoboken, N.J. The group’s latest album, “Long Gone Before Daylight,” will be released May 25 in North America via Koch.

Newcomers Rose and Martin will be touring in support of their debut albums. Rose’s “Because I Can” was issued Jan. 27 via V2, while Martin’s “On Your Shore” is due Aug. 10 via RCA.

Want to use this article? Click here for options!
Copyright 2004 Billboard

Pioneering Washington, D.C.-based rock act Fugazi has begun selling 20 complete concerts from its archive online, under the banner Fugazi Live Series. Priced at $8 for a single-disc show and $10 for a double-disc, the performances run the gamut from Fugazi’s first show on Sept. 3, 1987, in D.C., to a May 7, 1999, appearance in Kilkenny, Ireland.

“These are very much the original recordings without any attempt to correct for things like volume changes, strange mixing effects, or the occasionally out-of-tune guitar,” reads a statement on the Live Series Web site. “Though the sound quality on these tapes does vary, if a show was too poorly recorded it didn’t make the cut.” The discs will be burned on-demand and will come housed in a “generic cover with concert information and a track listing.”

Fans can sample MP3s and view set lists from each show on the Web site. Fugazi’s members have been kicking around the idea for several years, but the concept finally came to fruition in the past few months, while the group enjoys a hiatus from recording and touring.

In related news, Fugazi frontman Ian MacKaye’s new band, the Evens, will play May 1 at the Coachella Valley Music & Arts Festival in Indio, Calif. MacKaye has also launched the Northern Liberties label, to release “work that may seem obscure, but in MacKaye’s opinion speaks clearly to the point of music and expression,” according to its official Web site.

In celebration of both their music and their legacy, MC5/DKT (Davis, Kramer, Thompson) will begin a worldwide tour in mid 2004 that includes a stop in their hometown of Detroit as well as Japan, Canada, Europe, America and Australia. As they did in London last year, they will be joined by a rotating cast of guest musicians, making each show a singular celebration of the work of the MC5.

The tour coincides with the release of the DVD Sonic Revolution: A Celebration of the MC5, which includes footage from the 2003 Concert, a 30 minute documentary narrated by Mojo editor, Andrew Male, that traces the band’s history from their working class beginnings in 1960’s Detroit, through their controversial, politically charged and short lived career, into the present, and even US Dept of Defense footage of the MC5, taken from the government’s investigation of the notorious rock group during 1968’s Democratic National Convention.