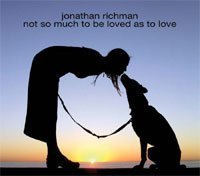 Jonathan Richman: Not So Much To Be Loved As To Love

On Not So Much To Be Loved As To Love, Jonathan Richman

Unreleased Wilco Music Due With Oct. Release Of Book

Members of the lo-fi

Marlon Brando, the stage and screen actor whose performances in “A Streetcar Named Desire,” “On the Waterfront” and “The Godfather” earned him plaudits as one of the greatest actors of all time, has died, his attorney told The Associated Press. He was 80.

Brando died in Los Angeles. The cause of death is unknown.

Brando shot to fame in the late 1940s with his groundbreaking performance in Tennessee Williams’ play “A Streetcar Named Desire” as the brutal, animalistic yet shy Stanley Kowalski.

Brando, a devotee of the Method, gave a raw, vital performance under Elia Kazan’s direction that had critics swooning. Using the technique, fostered by the Russian director Konstantin Stanislavsky and popularized at Lee Strasberg’s Actors Studio, actors draw on their own psychology and experience in creating roles.

Brando’s first film, “The Men” (1950), earned raves, but it wasn’t until the 1951 film version of “Streetcar” that he became a major movie star. Three years later, Brando won his first Oscar for his performance as ex-boxer Terry Malloy in “On the Waterfront,” also directed by Kazan. One of his lines from the film, “I coulda been a contender,” has been widely imitated.

He followed his early ’50s films with hits in “The Teahouse of the August Moon” (1956) and “Sayonara” (1957), but his career went into decline in the 1960s, particularly after his mannered performance as Fletcher Christian in 1962’s big-budget flop “Mutiny on the Bounty.”

His career revived, however, with perhaps his most famous role, that of Don Corleone in “The Godfather.” Director Francis Ford Coppola had only Brando in mind for the role, a decision not favored by producers, who almost fired the filmmaker over the decision.

Coppola was rewarded when the film became a huge hit — it was the highest-grossing movie of all time until “Jaws” came along — and Brando’s quietly regal, brooding performance as a Mafia kingpin was the film’s centerpiece.

The actor followed up “The Godfather” with a role in a different kind of film, Bernardo Bertolucci’s “Last Tango in Paris” (1973), in which he played a depressed American expatriate who strikes up a charged affair with a young Paris woman (Maria Schneider). Brando and Schneider were nakedly fearless, both physically and emotionally; the film was rated X upon its release.

Snoop Dogg will return to recording with the fall release of the tentatively titled new album “R&G (Rhythm & Gangsta): The Masterpiece.” The set will be issued jointly on the rapper’s own Doggy Style imprint and the Neptunes’ Star Trak label, through Geffen Records.

Snoop is collaborating with the Neptunes on the album, as well as Gap Band founder Charlie Wilson. Although unidentified, other producers with whom the rapper/actor/ubiquitous media presence has previously worked will also be involved, as will “some surprise superstar appearances.”

“Masterpiece” will be the follow-up to the 2002’s “Paid Tha Cost To Be Tha Bo$$” (Doggy Style/Priority). That album featured the Neptunes-produced cuts “Beautiful” and “From tha Chuuuch to the Palace,” plus guest appearances by Jay-Z, Nate Dogg, DJ Premier, Redman and Ludacris, among others.

“Bo$$” debuted at No. 3 on Billboard’s Top R&B/Hip-Hop Albums chart and No. 12 on The Billboard 200. It has sold 1.16 million copies in the United States, according to Nielsen SoundScan. “Beautiful,” which featured vocals by the Neptunes’ Pharrell and Uncle Charlie Wilson, peaked at No. 3 on the Hot R&B/Hip-Hop Singles & Tracks and Hot Rap Tracks charts and No. 6 on the Hot 100.

As previously reported, Snoop will be hitting the road later this month on Linkin Park’s Projekt Revolution tour.

As an actor, the rapper was most recently seen piloting the film “Soul Plane,” and as infamous pimp Huggy Bear the big-screen version of the 1970s television cop drama “Starsky & Hutch.”

The White Stripes have gone on the offensive against a filmmaker they say has released an unauthorized documentary about the duo. “Nobody Knows How To Talk to Children,” which was recently screened at the Seattle Film Festival, was shot by George Roca over the White Stripes’ four-night stand in 2002 at New York’s Bowery Ballroom.

“He wanted to videotape the entire event, stage performance and backstage goings on for his demo reel,” the band writes on its official Web site. “We said yes to his request provided he and his crew agreed to the following conditions: 1) it had to be all shot in black and white 2) the cameramen had to wear uniforms (white lab coats in fact), 3) no camera people were allowed to talk to anyone (this was to present a sense of easiness around the building so that people would be more themselves instead of being intimidated with a camcorder taping them the whole time) and 4) the White Stripes own the footage 100%.

“George Roca agreed to all of these terms. He signed a contract along with his co-workers stating that the White Stripes completely own the footage, and nothing could be done with this without our permission.”

When a rough cut of the film was later sent to Jack and Meg White, they felt it needed additional work and asked to give their input as to its content. “He said OK,” the site says. “With the last three years of intense touring and work schedule, this did not happen. And in fact the White Stripes pretty much saw this project — when done properly — as something we would probably release 10 years from now, not a month after it happened.”

In May, Roca requested permission from the Stripes and their management to screen the film. “For many reasons, we said no,” the band says. “We told him no formally, had lawyers tell him no. We sent him a very nice E-mail telling him no. So despite being told no, George Roca decided to take it upon himself to simply release it to festivals with no approval or permission from the White Stripes, no releases and no licenses, not in keeping with the contract that he signed.”

Roca has been sent a cease-and-desist order to block further screenings of the film. Meanwhile, the Stripes say they have their own concert DVD, shot earlier this year in Blackpool, England, ready for release at the end of the year.

The band will return to the live stage with several August festival appearances, beginning Aug. 1 at Japan’s Fuji Rock festival and wrapping Aug. 28-29 at the U.K.’s Reading and Leeds event.

With only frontman Bryan Ferry absent, “6PM” is the closest thing to a new Roxy Music album fans are likely to hear. It will be released July 19 in the United Kingdom on Expression Records through Ryko/Hannibal. North American release plans are not finalized.

Other guests include Robert Wyatt and Pink Floyd guitarist David Gilmour. The dozen songs include “Wish You Well,” a tribute to music writer/author Ian MacDonald, who committed suicide in August 2003. The track features Chrissie Hynde on harmonica.

“Everyone on [the album] knew Ian,” Manzanera tells Billboard. “He gave Chrissie her first job on [British weekly music magazine] NME in the mid-’70s, and I’d known him since we were at school together in the early ’60s. I even used some old lyrics he wrote.”

Manzanera is working on two other albums, according to his official Web site. The first is dubbed “Coroncho,” a collaboration with Colombian artist Lucho Brieva. Of the concept, the site says it stems from “two Latino males, their trials and tribulations, good and bad points, loves and hates, political correctness and incorrectness but ultimately, their good humour, good heart and ability to dance.”

Also in the pipeline is a collection of four unused songs from “6PM” in tandem with other previously unreleased material. This as-yet-untitled album should see the light of day by the end of the year.