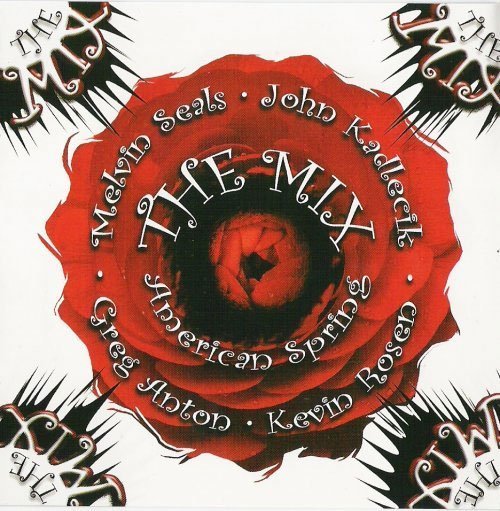 The Mix, is brand new musical collaboration that combines Hammond B-3 specialist Melvin Seals from Jerry Garcia Band fame on the Keyboards and Vocals, John Kadlecik and Kevin Rosen who use their guitar, bass, and vocal abilities to recreate classic Grateful Dead performances in their other band the Dark Star Orchestra, and the highly skilled drummer Greg Anton from legendary Bay area rock band Zero, to create an innovative and original debut album called American Spring.

Having just returned from a swing through Australia and New Zealand, Akron, Ohio-based rock duo the Black Keys have confirmed a spring North American run that will begin April 19 in Louisville and wrap May 14 in Carrboro, N.C. The Henchmen will support, augmented by appearances by Th’ Legendary Shack Shakers and the Legendary JC’s in select markets.

Before the spring dates, the Keys will play two one-offs in the Buckeye state. On April 8 at Akron’s Lime Spider, they will join Carney’s uncle Ralph, the Numbers Band, Half Cleveland, the Bizarros, Houseguest and C.D. Truth at a benefit for two cancer-stricken members of veteran Akron rock act Tin Huey.

Natalie Merchant, Widespread Panic, Juliana Hatfield and Jorma Kaukonen and are among the artists contributing songs to the benefit CD Too Many Years: A Benefit for Clear Path International.

Formed five years ago, Clear Path is dedicated to aiding landmine and bomb victims in Vietnam, Cambodia and Thailand. Released in recognition of the thirtieth anniversary of the end of the Vietnam War, Too Many Years — which takes its title from a Kaukonen song — will fund the organization’s mission to provide “direct medical and social services to the survivors and their families as well as equipment support to hospitals.”

The CD will be available for sale at cpi.org in early May, to follow the April 30th anniversary. Among the other artists contributing tracks are Philip Glass, the String Cheese Incident and the Samples.

After a disastrous 2004 when the entire tour was canceled due to sluggish ticket sales, Lollapalooza will return this summer as a one-off festival in Chicago’s Grant Park. The event will be held July 23-24 and Billboard.com has learned that Beck, the Killers, Kings Of Leon and Widespread Panic are among the bands being eyed to appear.

The Lollapalooza Web site will re-launch on Friday (April 1), while the full lineup is expected to be announced three weeks later.

Last year’s festival was to be a two-day traveling affair featuring Morrissey, String Cheese Incident, Wilco, the Pixies, Flaming Lips and Sonic Youth, among others, but was pulled in late June, less than a month before its planned start date.

How bad were advance ticket sales? “The worst I’ve ever seen,” one promoter who asked not to be identified told Billboard at the time. “I know a market in the Northeast doing two nights that [sold] 450 tickets for the second night and 1,100 for the first. Other counts were less than 1,000 for both nights.”

The William Morris Agency and Jane’s Addiction leader/Lollapalooza co-founder Perry Farrell are back on board with the 2005 edition and are joined this year by Capitol Sports and Entertainment, which also books Texas’ Austin City Limits festival.

Introducing a brand-new songwriting and performance ensemble: the Tempting Fate Revue. The group’s aims are threefold: to provide a showcase for unsigned, emerging singers; to raise money for charity; and above all, to develop new original music.

This upcoming gig will be the first in a series of dates, each showcasing a different group of hot young local singers with the band. Each one will also donate 100% of ticket sales and 100% of album sales to a worthy charity. Proceeds from the inaugural gig will be donated to Religions for Peace, the world’s largest interreligious organization. Dedicated to promoting peace, disarmament, small arms elimination, and women and children’s advocacy in more than 100 countries, the group has been given a oveted top four-star rating by the Charity Navigator rating service. (See rfpusa.org for more information.)

The group’s second gig will be held on May 5, with 100% of ticket and album sales going to benefit the AIDS Action Committee of Boston, a nonprofit community-based health organization that has garnered consistent national praise for its efficiency and effectiveness as an organization. (See www.aac.org for more information.)

Rilo Kiley has confirmed a two-month of tour, beginning April 28 in San Diego. The trek will take the band across the country and back — including an April 30 appearance at the Coachella Valley Music and Arts Festival and a June 11 stop at Tennessee’s Bonnaroo festival — before ending with a June 19 homecoming show in Los Angeles.

On the night between the tour opener and Coachella, Rilo Kiley will open for Coldplay at a previously announced show in Las Vegas. Inside Entertainment magazine recently reported that Rilo Kiley and Franz Ferdinand had been tapped as support acts for Coldplay’s summer North American tour, but a routing has yet to be announced.