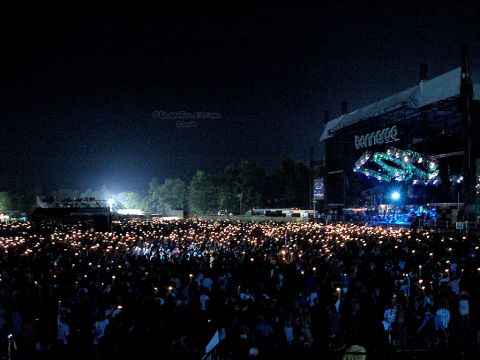 Bringing together high profile acts and emerging artists, Superfly Productions have continuously assembled a Bonnaroo line-up that exceeds fan expectations. Now in its 4th year, the annual event has moved beyond the proving grounds, and finds itself permanently circled in red on 90,000 summer calendars.

Superfly Productions, in conjunction with A Bonnaroo Event has unveiled the Zooma Tour from June 16-July 31. Headliners will be Trey Anastasio and Ben Harper & The Innocent Criminals. Additional artists, tour dates and on sale info will be announced shortly. This is the first attempt to spread the Bonnaroo name beyond the landmark Tennessee festival held the past four Junes in Manchester, TN. The Zooma tour will feature a complete activity village with vendors and attractions. For more info please visit Zooma Tour

Paul McCartney will tour North America this fall, beginning Sept. 16 at the American Airlines Arena in Miami. The outing, dubbed the “US” tour and presented by Lexus, will come in support of the artist’s upcoming Capitol album, which is yet untitled. So far, 28 shows are on tap through a Nov. 29 finale at Los Angeles’ Staples Center.

McCartney last toured North America in 2002, when he was the top touring artist in the world, grossing $126 million from 58 shows, according to Billboard Boxscore.

Tickets for some shows go on sale beginning Thursday (April 22).

Lance Armstrong will retire from professional cycling after this summer’s Tour de France, ending one of the great careers in all sports.

“Ultimately, athletes have to retire … the body doesn’t just keep going and going,” Armstrong said Monday at a news conference.

Eddy Merckx of Belgium and Bernard Hinault and Jacques Anquetil of France are the only other riders to win five Tour de France races overall.

Armstrong’s streak of six straight titles, along with his inspirational recovery from testicular cancer, has made him a superstar in the sport and an international celebrity.

Armstrong’s possible retirement plans had become the focus of growing speculation as he spoke in recent months that he wants to spend more time with his three children and in his campaign against cancer.

Armstrong says he is “100 percent committed” to his decision to retire and that he will not be participating in any other races after July 24 — the scheduled end of the Tour de France.

The announcement came on the eve of Armstrong’s defense of his Tour de Georgia championship. The six-day, 648-mile event he uses as a training tool for the Tour de France begins Tuesday.

His new two-year contract to race for the Discovery Channel team requires he compete in just one more Tour de France.

“I was fortunate to win six times. Can I win again this year? I’m not sure, but I’m going to try,” he said. “It’s my ambition to win and also a little bit of my job to win.”

He has said previously if he retires he would amplify his high-profile role as a cancer survivor.

Armstrong’s relationship with rock star Sheryl Crow has also made him the focus of the tabloids and paparazzi.