Leftovers: C’mon AC/DC – Bust It Out

Jam fans are pretty lucky in that their favorite bands change up the setlist from night to night. AC/DC fans aren’t so lucky. The Australian natives’ Black Ice tour has

On an evening when the attention of an entire city – and most of the Northeast – was turned to a small baseball game in the Bronx, jamband veterans Blues Traveler returned home to The Filmore New York at Irving Plaza for the first time in over a year. For over two hours, the band treated the packed house to classic covers, special guests, and their own hit singles.

Mixing Sublime’s, What I’ve Got and Cheap Trick’s, I Want You to Want Me, with Hook, The Mountains Win Again, and of course everyone’s favorite, Run-Around, John Popper invited old friends Jamie McLean to the stage for Mulling It Over (just weeks after his sit in at Sullivan Hall with former Spin Doctors lead Chris Barron) and the lovely Falu to join in on The Path.

With the evening winding down and news of the World Series victory spreading through the crowd, John and bassist Tad Kinchla (in an appropriately attired in a Yankee cap) began the encore with a Led Zepplin tease into a “Let’s Go Yankees” chant, before finishing up with Forever Owed and But Anyway and releasing the delirious crowd into the crisp night.

Set: How You Remember It> What’s For Breakfast, Girl Inside My Head> Slow Change, What I Got> Mulling It Over*, You, Me & Everything> NY Prophesies, The Mountains Win Again, The Beacons> I Want You To Want Me, Carolina Blues, Look Around, The Path**, Just For Me, Nail> Hook, Dropping Some NYC> Crash Burn> Dropping Some NYC, Run-Around

* with Jamie McLean on guitar
** with Falu on vocals

READ ON for more of Jeremy’s Traveler photos…

Being the live music junkie that I am, I have been subjected to some surprises over the years. Some were more than welcomed surprises, like this one time back in ’77 or ’78. I had to meet some guy named Boris (don’t ask) at a bar in Manhattan called Traxx. There was a trio playing on a small stage, killer rockabilly. Skinny, no shirts, a guitar bigger than the player. Upright bass and standup drummer playing a pretty austere kit. The Stray Cats were playing that night. Lucky Break.

Another time I won tickets to see The Tubes from a local radio station. The show was in a small club in downtown Portland. About halfway through the first song I noticed that it was not Fee Waybill behind the oversized shades, but a Waybill-wanna-be. Bad surprise. Glad I didn’t spend money for those seats.

There was another time the surprise just made me a tad less than comfortable. Sitting in the third row for the Mark Farner Band I was all set for a night of Grand Funk Classics, of which there were plenty. But, after opening with a few early ’70s gems, Farner said he wanted to show us where he had been for the last few years. What followed was about an hour of Christian church songs with a boogie beat, I mean Onward Christian Soldier kind of stuff. Well played, good music and all, plus I got my Grand Funk fix before the night was through, but just not how I expected it. I suppose the Mark Farner Ministries t-shirts I saw in the front row should have been a dead giveaway.

Those surprises came years ago, before the internet really, which dates them back far enough. Nowadays with the sweep of a mouse you can find out everything you want about a touring act in a matter of minutes. When I heard that Loggins & Messina were coming to town I did a little research before shelling out the ducats. I found a lot of raves about their 2005 Sittin’ In Again tour, but very little about their current outing. Just like with movies sometimes, no previews may be a bad sign.

READ ON for more from AJ on Loggins and Messina…

The Pixies kicked off another reunion tour in Hollywood on Wednesday night and will be Conan O’Brien’s musical guest this evening on The Tonight Show. The seminal band has dusted

The Danish trio, Mew have confirmed their plans to pay it forward to local U.S. bands on their upcoming tour.  Throughout Mew’s touring career in the states, the band has

"Sisterworld" the follow up to "Liars" (2007), was written and recorded in Los Angeles by Liars and Tom Biller (Kanye West, Beck, Where The Wild Things Are / Eternal Sunshine

Pavement guitarist Spiral Stairs has revealed that the band are planning to release a best of compilation featuring previously-unreleased radio sessions next year. The guitarist, real name Scott Kannberg, told

Four Tet has announced details of his new album, as well as a UK tour early next year. New album ‘There Is Love In You’ will be released on January 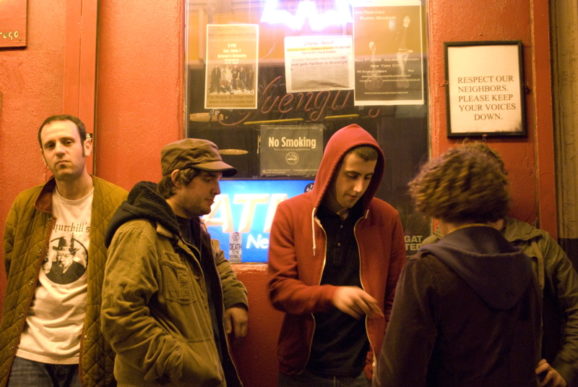 It is safe to say that this year’s lineup for the annual CMJ festival was the most underwhelming in years, maybe ever.  Usually there are 10-20 established acts, and a handful of showcases packed with up and coming contenders that everyone is clamoring to get into, not so for ’09.