A week ago today, I was just waking up on the MSC Poesia about to enjoy the final day of Jam Cruise 8. Over the course of the trip’s five days, I caught one outstanding musical performance after another. For this week’s B List I’ve put together my thoughts on my ten favorite sets of Jam Cruise 8.

Now, as a disclaimer, I didn’t see every set so I can only comment on what I saw. I’ve heard wonderful things about the Sexual Chocolate set and the STS9 theater set, but I wasn’t there. I tried to catch as much music as I could, but I couldn’t see it all. With that said, let’s get down to business…

HT faves the Ryan Montbleau Band got on the boat by the skin of their teeth after an extremely close “Vote to the Boat” competition. The Boston-based band made the most of the opportunity all week long, showing up at various events and in the Jam Room each night. Ryan and the boys kicked off the action on Monday morning with a fantastic set that included old favorites, a new tune and a couple of slamming covers. Watch out for these guys in 2010 as they are ready to take the scene by storm.

Once the show started off with a mixed bag featuring Shakedown Street, Next Time You See Me and Stir It Up, it was pretty clear DSO was playing an original setlist for their theater set on Jam Cruise 8. While this is clearly a band in transition, the connection between former long-time band mates Jeff Mattson and Rob Barraco was clear throughout. There were a number of people I talked to who hadn’t given DSO much of a shot in the past, but enjoyed the hell out of themselves in the theater this night.

Chapel Hill’s Memorial Hall practically quaked with spiritual energy during the recent Down By The Riverside tour stop. Featuring two of America’s musical treasures, The Preservation Hall Jazz Band and The Blind Boys of Alabama, the tour was a showcase of New Orleans music and also a broader tribute to America’s disappearing roots music legacy. The tour concluded on a busy, chilly night in one of the state’s most appropriate venues, and the reverent audience became part of the show on more than one occasion.

Preservation Hall performed in missing man formation due to the unfortunate health issues of longtime bassist Walter Payton. Always the consummate professionals, the septet delivered an engaging, virtuosic performance with the expected perfection and vibrancy. There’s been a changing of the guard and an injection of new talent into the rugged old jazz machine, though the incestuous NOLA music scene tends to keep a lot of last names in place. Director Ben Jaffe, who took over the position from his father, leads a diverse and seasoned group whose ages range from mid-30’s to somewhere in the realm of 70.

Bonded by a tensile musical education that can only be achieved by coming up in New Orleans, the band surged through over an hour of music, touching on many of the city’s most beloved sounds. The classic, Dixieland-ish New Orleans sound dominated the set, but a few of their selections surprised me. I don’t remember their sets including as many be-bop, blues and boogie excursions when I saw them last, but that was ten years ago. Even institutions as staunch as PHJB evolve over time, and they seem to have found fertile, elusive middle ground between the hundred-year-old jazz traditions and more modern ideas – provided your idea of “modern” includes the 1960’s. READ ON for more from Bryan on this fantastic show…

As we eagerly await My Morning Jacket’s return from a year-plus hiatus, Jim James has kept himself busy during the downtime. First as a member of Monsters Of Folk and

Our buddy Jeff Weiss and his friends put together this hilarious video of the scene in the parking lot at Festival 8. Check it out… Phish Parking Lot – Brilliant

Bill Payne, Paul Barrere and their cohorts in Little Feat are probably well aware that they could coast on the strength of the catalog and get away with it. Little Feat’s output, taken as a whole, is not only humbling in its accomplishment but still underrated enough as to have ardent fans who are fiercely protective of it. In other words, a stock setlist with Dixie Chicken and Willin’ as the centerpieces, performed with minimal gusto, would be enough to do the job and enough to keep Little Feat-headlined concert halls comfortably packed. The songs are friggin’ beautiful, and so very loaded — they’d lend nicely to a revue, wouldn’t they?

That it isn’t that way is precisely what makes the Little Feat touring apparatus so compelling. It’s a more streamlined unit than in the past — Shaun Murphy’s vocals are missed, and drummer Richie Hayward is sidelined in cancer recovery — but its members dig deep, radiate a love of these songs and a pronounced interest in their care and feeding, and even on an off night, can pull some terrifically groovy and expansive improvisational flights from the guts of well-worn jamming vehicles. It’s what keeps them fresh — Little Feat shows sound so damn fresh — and is why I push Little Feat on those who’ve either never had the pleasure or are still convinced Little Feat went under when Lowell George did.

In recent visits to the Big Apple, the band’s favored the Concert Hall at the New York Society for Ethical Culture: a pretty place for sure, with good acoustics and a comfortable vibe. It wasn’t quite full — I’d guess about 75-80 percent, with low-end tickets north of $50 with fees — but the Feat brought the heat for two hours, leaning hard on bluesadelic jams that favored carving songs out from within more often than straight, with you-solo-now-you-solo structures.

READ ON for more from Chad on Little Feat in NYC… 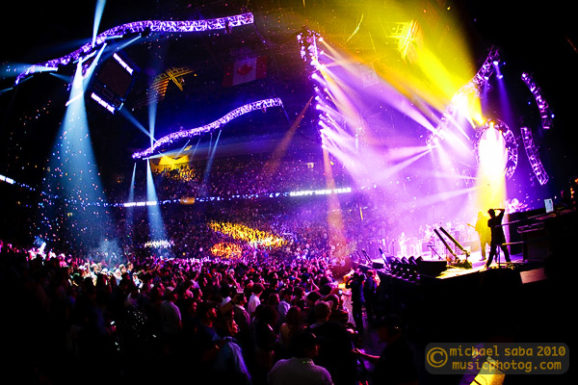 The Dropkick Murphy’s have captured the intensity and camaraderie of their annual Boston hometown St. Patrick’s Day shows on ‘Live on Lansdowne’ a CD and DVD set for release March

Headling Tour For The Low Anthem

Sea Wolf burst into 2010 riding the wave of one of the biggest cultural phenomena in recent memory, "Twilight: New Moon," the wildly successful vampire franchise, with original song, "The

TO Records is thrilled to announce that Dawes has confirmed a co-headlining winter tour with Cory Chisel and the Wandering Sons. The dates will kick off on February 5th at