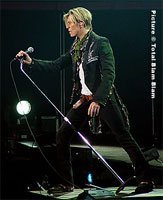 The consummate musical chameleon, Bowie had his fans guessing up to showtime whether or not he’d even show up, after cancelling the first five nights of the “A Reality” North American Tour with the flu. From the moment Bowie took the stage in Montreal, he erased any signs of fever and played energized versions of his classic song catalog, proving he is truly a rock star.